Employees at Advisors Excel pay it forward after being inspired by Warrick Dunn’s work for single parents and their children. 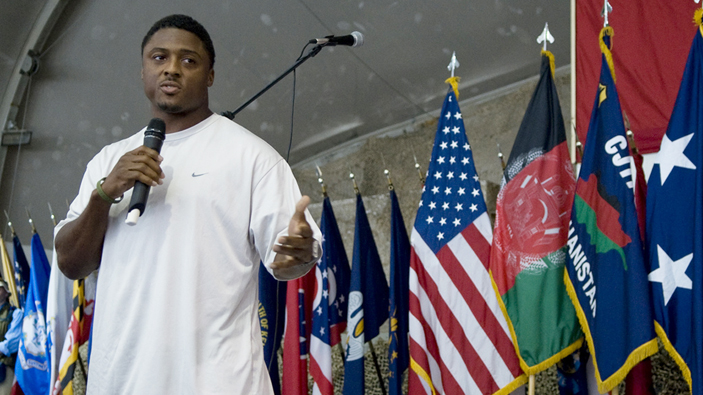 My hero, John Wooden, once famously remarked: “You can't live a perfect day without doing something for someone who will never be able to repay you.”

Recently, I got to witness a perfect day.

I was in Topeka, Kansas, visiting the insurance-marketing company Advisors Excel. It was my third time speaking for the company at its headquarters, and I always enjoy my visits to the city. This time, however, they had a surprise in store for me.

After the speech, company executives informed me that they had been inspired by the story I had shared previously of retired NFL running back Warrick Dunn and his incredible journey of healing and generosity.

You see, Warrick Dunn grew up as the oldest of six children under the care of their mother, Betty Smothers—a dedicated single mother and Baton Rouge, Louisiana, police officer. Money was always tight, so the family often moved from house to house, trying to save on rent while dreaming of one day buying a home of their own that they would never have to leave. But Betty never lived to see that dream realized. On January 7, 1993, Corporal Smothers was shot and killed in a botched robbery attempt at a bank, and 18-year-old Warrick’s world collapsed.

Despite his incredible performance on the field in college, his heart was breaking as he worked to keep his grades high and to step up as the man of the house as he raised his siblings from afar, with the help of his grandmother. The men accused of murdering his mother were convicted and sent to death row, but Warrick still struggled with how to move past the tragedy. Through it all, Betty Smother’s words kept ringing in her oldest son’s ears: “In life, you’re going to face difficulties, but you have a choice. You can either use them to make you bitter, or to make you better. Choose to be better.”

In his very first year in the NFL, Warrick decided to he wanted to invest his salary in making the dream of home ownership come true for hard-working single parents—men and women just like his mother. In this way, the Homes for the Holidays program began. Through his foundation, Warrick Dunn surprises a family by providing the down payment, all the furnishings, and a fully stocked pantry, cabinets and lawn-care shed for single parents who have taken financial management classes and invested sweat equity with organizations like Habitat for Humanity. He does it in honor of his mother’s memory.

As I stood on that stage in Topeka, I could see how the legacy of Betty Smothers’ words to her children had not only prompted them to choose being better over being bitter, but now she was inspiring others, too. After hearing me talk about Warrick’s incredible story, the employees at Advisors Excel had decided to invest in their own community by helping to build and outfit a home for a single mother of four who works as a home healthcare aid. And they had arranged it so that I would be there when she was handed the keys to her family’s new home—that very morning.

As we drove to the site, I was so overcome with emotion that I couldn’t even text Warrick to tell him about the incredible act that his efforts inspired. It turned out, I didn’t need to: When we arrived at the house, Warrick Dunn was waiting there for me with a huge grin on his face! As his foundation looked to expand into more cities, Topeka was on the list, and together, they partnered with the folks at Advisors Excel to make the first house happen.

But as incredible as the surprise was for me, it was nothing compared to the surprise of the family when they arrived. They had no idea that their house was being furnished and stocked, and the down payment covered, by a local company and a national sports hero.

I was overwhelmed as we presented the mother with her key, and she was overwhelmed as the reality of homeownership became real. “Is this my new address?” she asked with a smile and tears in her eyes. But I think the most telling moment of the whole day was when one of her sons, upon opening the pantry and cheering at the supply of macaroni and cheese, canned vegetables, pasta, and other non-perishables inside, remarked: “You know, they’re doing a food drive at the shelter. Now we have stuff we can take!”

This morning, 348 children woke up in their own home—with a sense of permanence, security and pride—because of this foundation. In fact, the University of South Florida partnered with the Warrick Dunn Foundation to examine just what kind of far-reaching impact his work might have on the children, and the results were incredible. Two-thirds of the parents were able to pay for more extracurricular activities for their children, more than half reported an increase in respect from their children, 70% reported an increase in their children’s educational performance, and 76% reported a sense of hope for better futures for their children—all after the family took possession of their new home.

As I had the privilege to witness in Topeka, the spirit of giving that Warrick Dunn has embraced through his grief has not only changed the lives of the families he has helped, but it has also inspired countless other men and women—and children, too—to pay it forward and to use what they have to bring hope to someone else.