Cookbook author Paula Wolfert is speaking out on behalf of those battling Alzheimer’s Disease. 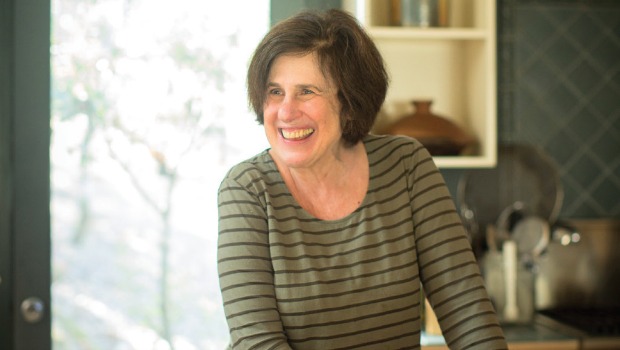 In 2012, when a journalist interviewed Paula Wolfert about her latest cookbook, The Food of Morocco, she had forgotten the beginning of his question by the time he reached the end of it. Paula improvised. “That’s a brilliant question,” she told the reporter. “But let me talk about the magic of tagines.”

Recounting the story to a group of about 200 chefs and foodies gathered in a downtown Los Angeles parking lot that has been turned into a pop-up Mediterranean restaurant, Paula laughs as she says, “I can talk about tagines forever.” Everyone chuckles, but they know the author of nine acclaimed cookbooks—and a five-time winner of the James Beard Foundation Award—is sharing more than just amusing tales from a book tour.

After that exchange with the reporter, Paula saw her doctor and had a series of tests, including an MRI, that led to a devastating diagnosis. Her memory lapses weren’t just “senior moments”—she had Benson’s syndrome, a variant of Alzheimer’s disease.

Friends step in to help

“I’m not in denial—that’s not an option,” Paula says. “I’m not going to be ashamed. I remember the days when people didn’t say they had cancer. Same with HIV. Then some people came out publicly, and they helped bring attention and funds to their cause. That’s where we are with Alzheimer’s today.”

Similar fundraisers will take place across the country. Serge Madikians, the chef-owner of Serevan in NewYork’s Hudson Valley, is here to gain some tips for an event he’s planning at his restaurant this fall.

From author to activist

“Paula’s an inspiration,” he says. “She shows that you don’t surrender to adversity. You figure out what you have control over and what you don’t, and then you come up with a plan.” Paula agrees. “I can’t write cookbooks anymore,” she tells the crowd. “But I have too much energy not to do something so I’ve become an activist.

I don’t know if this is going to help me. But I’m not feeling sorry for myself. It may help you.”

When tomatoes are ripe and summer bell peppers are local and at their sweetest, this raw salad really shines. It helps, too, to use a really great mono-floral honey such as lavender, eucalyptus, clover or acacia that is liquid, delicate and well-balanced.

Mix tomatoes, peppers and red onion in a salad bowl. Mix honey, vinegar, oil, salt and pepper and toss with the vegetables in the bowl. Sprinkle the chopped herbs on top. Keep refrigerated until ready to serve

(This recipe is from The Food of Morocco, HarperCollins, 2011.)