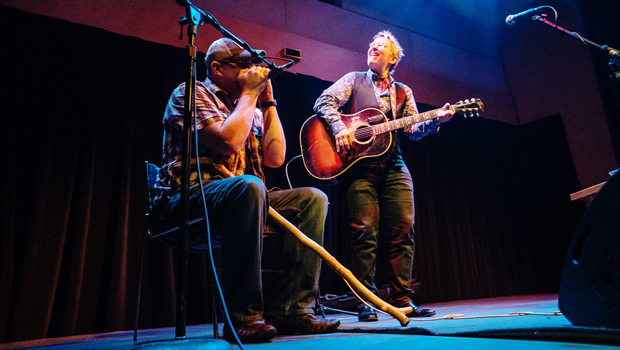 Songwriting at The Linda, photo by Bryan Lasky

Jay Clementi knows what it takes to write a hit song. The Nashville-based singer, songwriter and producer has mastered the art of the musical hook, penning hits for such artists as Luke Bryan, Martina McBride and Dierks Bentley.

But some of Jay’s most meaningful work will most likely never make the charts or even find airplay on the radio. And he’s absolutely fine with that.

“When you write a song commercially, you always have an eye to the radio and what could be a hit,” he explains. “You’re writing truth, but you’re also making up stuff. This is so different. It’s a completely different focus.”

As one of a dozen or so songwriters working with the SongwritingWith:Soldiers (SW:S) program, Jay uses collaborative songwriting as a tool for healing. The program combines positive psychology tools with the power of music to foster a rich healing environment for military men and women who are either veterans or on active duty.

“They’re soldiers, and they’re brave in so many ways, but [opening up like this] is a different kind of bravery,” Jay says.

The seeds for SW:S were planted in 2012 when Mary Judd, a specialist in creative communications and positive psychology programming, reconnected with her childhood friend, Texas singer/songwriter Darden Smith. Darden was moved to action after performing at a U.S. military hospital in Germany and wanted to find a way to use his skills to help those who were serving in the military.

Mary, who had experience at organizing events such as happiness retreats, saw the potential of applying positive psychology principles to a songwriting environment. The two were convinced they could combine music and positive psychology to help the lives of soldiers and held their first retreat in October 2012.

“I think all of us can relate to the power of a song and what it can do for us, both physically and emotionally,” Mary says. “We are not a music therapy program. What happens at our retreats is very therapeutic and cathartic, but we always emphasize that we are not therapists.”

Still, the songwriters are picked based on their ability to connect, communicate and empathize with their military collaborators. In addition to Jay and Darden, artists participating in the program include Grammy Award winners and hit makers including Radney Foster, Beth Nielsen Chapman, Gary Nicholson, Mary Gauthier and more. The program has become so popular that Mary Judd is in the process of creating a curriculum to train more songwriters in the SW:S principles.

“I really felt strongly, based on the happiness research that I’ve studied, that the moment [we have with the soldiers] is such a spark,” she says. “We wanted to fuel that to do more, so we put a lot of intention into how to build the program, what we do beforehand and what to do after.”

The weekend begins with a meet and greet where military members, and sometimes their families, gather together with the songwriters in a casual reception. That casual time is meant to break down walls, release anxiety and familiarize them with the songwriting process.

“They write a song together that very first night, as a group,” Mary says. That helps prepare them for the next day, which sees each soldier sitting down one-on-one with a songwriter to come up with a song. There’s no pressure to dig deep; they’re just sharing their experiences.

“Whether it’s funny or sad or tragic or triumphant, the songs tell their story,” Mary says.

During the time they’re not working with a songwriter, participants are offered workshops on reconnecting with their creativity through art, cooking, photography, journaling and more. There are sessions on yoga and breathing meditation, and Mary offers workshops on principles of positive psychology such as mindfulness and character strengths.

“This really is a positive psychology-based coaching program,” Mary says.

It just happens to have a killer soundtrack.

The SW:S program has proven to be more than just cathartic for soldiers; it’s been life saving.

“Not just from a, ‘I’ve found myself again’ point of view, but from a literal, ‘I was going to kill myself because I felt so isolated, but this helped me to bridge that gap so I’m not so isolated anymore’ way,” says A.J. Merrifield, who served in the U.S. Army from 2002 to 2011 with multiple tours in Iraq.

“This isn’t just a little creativity exercise, it’s not basket weaving as a way of distraction, but rather a genuine and important way of helping those who are returning from the crucible of war, loss and sacrifice to communicate.”

A.J., who first attended a SW:S retreat in April 2013, says the experience made him feel less isolated and helped him learn to reconnect—an important but often challenging ability for any military member.

“The whole point of SongwritingWith:Soldiers is to help bridge the gap between veterans and others, whether it be other veterans or civilians,” says A.J., who now volunteers with the organization. “I’ve found that it also helps bridge the gap within ourselves, too, accessing some of the thoughts and feelings we either try to forget or don’t like to acknowledge. It helps us deal with and confront those feelings.”

On his retreat, A.J. teamed with Jay and fellow military veteran Chris Chirco to write “A Call to Prayer.”

“It grew out of a discussion that the three of us had…about the dichotomies of faith in a combat zone, how the experience can make or break your faith, the feeling of loss when losing a comrade and how you deal with those things,” he says.

The song deals specifically with the loss of one of his soldiers, SPC Clinton R. Upchurch.

“In a way, this song keeps him alive, too, by keeping his name out there, keeping those memories fresh—that’s something I’ll always be grateful to Jay for.”

The program has been transformative for the soldiers, but it has also deeply touched the songwriters who participate. For singer/songwriter Mary Gauthier, SW:S has become a calling that she turned into her latest album, Rifles and Rosary Beads.

“Using songs and songwriting to connect people who have been disconnected because of a traumatic event is just a natural fit for me,” she says. “I’m excited about being given this privilege to work with people who want to do this work, who want to get better. We’re losing 20 veterans a day to suicide because of war trauma. There is a crisis, and writing songs with veterans is helping on some level to address it.”

Rifles and Rosary Beads features 11 songs written with soldiers, and Mary donates a portion of every sale to SW:S. The album is nominated for the Album of the Year by the Americana Music Association and has earned widespread critical acclaim.

“Taking something difficult and turning it into something beautiful helps move trauma out of the brain in ways that are quite profound,” she says. “I think that’s what I’m on earth to do, to help show the resilience of the human spirit. If I look at this record and the songs I’ve written over the last four years with veterans, in the end, even the most harrowing [songs] are about love.

“Because in the end, love is what saves us all.”