A Twist of Faith

Shane Claiborne’s ministry puts a whole new spin on faith, community and helping those who are less fortunate. 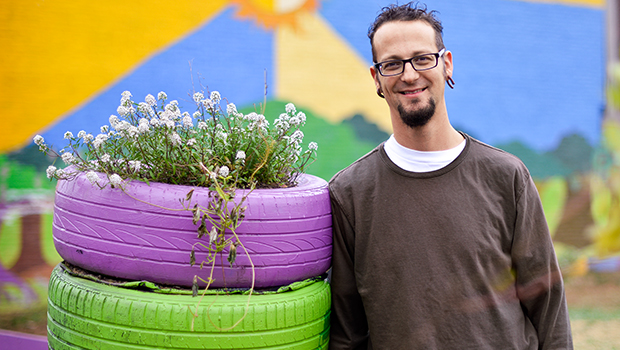 Turns out, the chief was trying to evict the women and kids from an abandoned church in North Philadelphia’s “Badlands,” an area known for drugs, where they’d taken refuge from the cold autumn winds that swept off the Delaware River a few blocks away. The women had moved inside the church and were sleeping with their children on pews and on the floor in the unheated structure. Then the religious organization that owned the church wanted them out.

Shane and his buddies from Eastern University had been at the church to pray with the families and offer support. However, unbeknownst to the group, the city’s fire chief had scheduled a surprise inspection for 7 a.m. The plan was to inspect the church, “discover” a bunch of fire code violations, boot everyone out and then the police would enforce the order.

But not all of the rank-and-file firefighters were on board. Later that night, two firefighters arrived to tip off the families and help bring the church up to code. By dawn, with Shane, his friends, the firefighters and the mothers working all night, the church was in compliance with every requirement of the fire code. Fire extinguishers. Exit signs. Wiring. The whole enchilada.

The chief arrived, stomped through the structure, then left. The moms and kids stayed, and Shane realized that he’d just stumbled into what he was supposed to do with his life.

Shane is a radical. Make no mistake about it. He emerged out of the Bible Belt of East Tennessee, spent some time in his youth as a self-professed Jesus freak, attended a prestigious Christian college, grew a wild mane of dreadlocks, interned at arguably the largest, most-affluent Protestant church in America, and did graduate work at Princeton Theological Seminary.

But Shane doesn’t practice his faith in a traditional way. He does it by feeling his way along the path he senses God has laid out in front of him, one shaped by sleeping on the streets of Chicago with the homeless, working with Mother Teresa in Calcutta and breaking bread with the oppressed, the tortured and the abandoned. As he writes in his book, The Irresistible Revolution, “I learned more about God from the tears of homeless mothers than any systematic theology ever taught me.”

Pursuing this path has been Shane’s single-minded purpose for two decades. It’s not that he’s left the traditional practices of religious life behind. Prayer, caring for others, scripture, contemplation and communion are the touchstones of his existence. No, it’s more that he’s returning to simpler, more spiritual roots.

He’s ditched the big-mortgage church for a small community church in his neighborhood. He’s abandoned the pastoral manse for a fixer-upper row house in the Badlands that cost a few thousand dollars. And he’s helped create a small, intentional community of six to eight men and women who live and pray and work together every day of their lives.

That community, calling itself The Simple Way, is, as their website boldly declares, “a web of subversive friends conspiring to spread the vision of ‘Loving God, Loving People and Following Jesus’ in our neighborhoods and in our world.” It’s a noble purpose. And fueled by their passion, the community members began getting the hang of how to do it.

“When we started 16 years ago, we were reacting to crises,” Shane says. “We were feeding 100 people a day and trying to help people with housing issues.” There are still crises, he says, but over the years, the neighborhood has stabilized. Even when people have housing issues, they’re likely to stay in the neighborhood. And now the community has aquaponic systems, gardens, rain barrels and the ability to grow its own food.

A new kind of paradise

“One friend says we’re trying to bring the Garden of Eden to North Philadelphia,” he says. But even the Garden of Eden had a touch of evil slithering around, and some days, Shane and his friends help their neighbors simply by accompanying them through the dark times. For example, a young man was shot dead on his block. (“Gun violence is a big focus here,” Shane says.)

So the group supports its neighborhood by offering a loving presence and helping neighbors find ways to express their grief, their anger and their expectation of a better day. At one gathering, the neighborhood came together to follow the biblical injunction to “turn swords into plowshares.” “We [had the guns melted], did a kind of welding workshop, got a forge and heated the guns,” he says. “Then the mothers who had lost kids to gun violence beat the guns into trowels.”

Using the trowels in the garden to grow food that would feed the next generation of kids was a powerful statement of the women’s determination that love would triumph over hate, forgiveness over anger, good over evil.

Acts like these have only shined the light brighter on Shane and his personal brand of the Christian lifestyle—and are attracting attention from across the religious spectrum. Each year, he receives invitations to speak at more than a hundred events in a dozen or more countries and nearly every state. He has led seminars at Vanderbilt University, Duke, Pepperdine, Wheaton College, Princeton and Harvard.

Shane may be on to something, with his simple, purposeful and passionate approach to faith, and maybe, just maybe, we could learn something from him.