Folk Schools Revitalize Traditional Skills of the Past

At folk schools, students come from all over to learn old-fashioned maker skills, from weaving to blacksmithing. 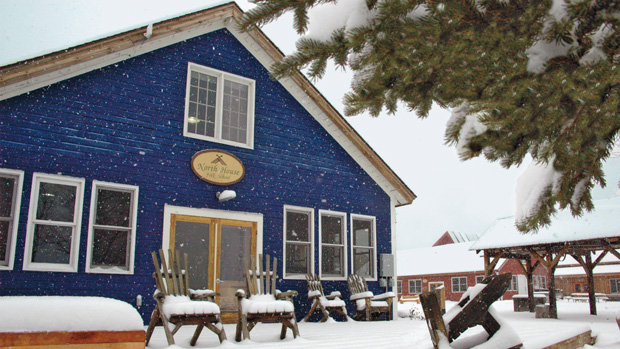 Sunlight streams through huge windows and wide doors that open onto a dock and the sheltered harbor of Grand Marais, Minnesota, where waves from the mighty Lake Superior crash against the breakwater. Inside, delicate curls of wood accumulate on the floor around eight students at work on electric lathes, intently turning 4-inch-thick disks of birch into artful wooden bowls.

This is North House Folk School, where people of all ages and walks of life learn artisan skills in a collection of colorful buildings that looks like a small New England village. No matter what the class—knitting to boatbuilding—they come here to make physical objects with their hands and do what, according to North House Executive Director Greg Wright, “humans were designed to do.” 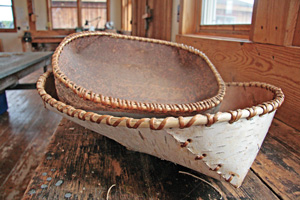 Watch for a while and you’ll see there’s much more going on in this workshop than turning wooden bowls. Class member Jay Schulz, a recently retired chemist and product steward for 3M in St. Paul, Minnesota, says, “While working as a chemist, I was constantly juggling multiple programs, holding hundreds of details in mind and making constant value judgments.” By contrast, he says, “When turning wood, it’s just you and a piece of a tree. When I turn, I am focused on one element at a time, making the best cut possible, but surrounded by all the varied and rich characteristics of turning. For example, there is the smell of the wood, the sound of the cut, the vibration of the tool in hand, the direct visual of the cut happening while in the periphery you watch the new shape forming and the chips and ribbons flying. Turning is pure joy of the moment.”

Hands Instead of Thumbs

Whether you call it slow living, downshifting or the DIY movement, artisans like Jay are part of a resurgence in handcrafts. It can be seen in the growing number of folk schools that have taken root in the United States from Alaska to Florida where they teach thousands of people each year how to build wooden boats, cobble shoes, bake with ancient grains, build and play musical instruments, make pottery and even turn a squirrel into soup and tan its hide.

On the surface, these pursuits may seem quaintly amusing. Why carve a spoon when you can buy one? “I tell people I make baskets, and they think I’m kidding,” says Pattie Bagley of Marietta, Georgia, who is a resident artist at the John C. Campbell Folk School in Brasstown, North Carolina. “They think it’s hilarious, but then they get interested.” 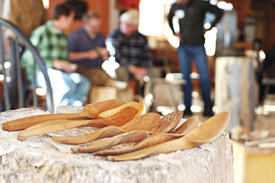 Folk schools attribute the popularity of handcrafting to a combination of factors. They cite the recent economic recession that prompted a greater interest in frugality and self-sufficiency and a growing interest in healthier and more sustainable living. They also mention a rejection of too much technology as a driver of the trend. Students often seek an escape from the virtual life of social media and computers to find meaningful connection with their fellow artisans and to work with their hands, not thumbs. Pattie says, “Young people are looking for more than glass and plastic. They want connection and something authentic. You can score 10,000 points on a computer game or, with the same amount of time, make something tangible of quality and value.”

Baby boomers, on the other hand, often find their way to folk schools in search of a new means of self-expression. “I’ve been a lawyer and a mom,” says Lorna Gleason of Minneapolis, who took pottery classes at John C. Campbell, “and now I have the time to explore other activities.” Such learning vacations are one way to discover new creative outlets and to experience the satisfaction of making beautiful objects.

An added draw: Many folk schools are in idyllic settings that allow travelers to connect with beautiful destinations from the Adirondacks to the Oregon coast in a more meaningful way, by learning the craft traditions of the region.

What Is a Folk School?

The idea of folkehøjskole (folk school) emerged in Denmark in the 1830s with educator and philosopher N.F.S. Grundtvig, who advocated noncompetitive “schools for life” that encouraged inner growth and development in connection with the larger community. John C. Campbell, an American educator and reformer, saw that the Danish schools “had helped transform the countryside into a vibrant, creative force,” according to folkschool.org. John hoped that such schools could improve the quality of the Appalachian region’s crafts. That would allow artisans to profit from their work and help preserve the traditional skills of the area as well.

In 1925, his widow, Olive, founded the John C. Campbell Folk School, the granddaddy of U.S. folk schools, and it now offers 860 weekend and weeklong classes on its 300-acre campus. Like a year-round camp for grown-ups, the John C. Campbell experience includes housing and food, singing before meals, contra dancing and square dancing, and tours of local artists’ studios. Six thousand students of all ages arrive each year to find that “vibrant, creative force” in themselves. 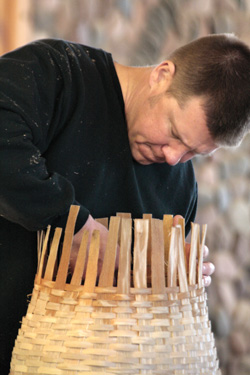 Folk schools are as diverse as their locations. Many newer schools offer classes in the homes or on the farms of their instructors or in state parks. Most offer courses in pottery, weaving, photography, cooking and blacksmithing, but also specialize in the traditional skills of their region. In Minnesota, for example, folk schools emphasize Scandinavian crafts and skills of the North such as building canoes, baskets or bowls from birch. The common thread is that the schools tether the past to the future with a focus on skills that have been lost to convenience culture. “It’s not about rejecting today. It’s about adding back in what’s been lost,” Greg says.

People once learned to make things by hand—cooking, carpentry, knitting and sewing—at home or perhaps in home economics and shop classes at school, but now those opportunities are scarce. Martha Owen, a weaving instructor at John C. Campbell from Murphy, North Carolina, explains, “My grandmother wanted nothing more than to leave farm life behind. My mother was an engineer, and her generation rejected anything handmade including food, so there was no one to learn from.” Folk schools are filling that role by recovering and passing on skills that have nearly been lost in everyday life. Greg says, “We’re fostering the next generation of artisans and people who believe this stuff matters.”

Clay flies off the wheel, bread fails to rise and stitches drop. For beginners, trying a new skill takes a bit of courage, and students often start by declaring, “I’m not artistic.” Yet, says Pattie, “It’s hard to describe the feeling of accomplishment, the value of hot, crusty bread right out of the oven, the beautiful pot or basket and the joy of ‘getting it’ when you finally start to master a new challenge.”

Watching students in that process, it becomes apparent that it’s about much more than the end product; it’s about learning and experience. That’s especially true when, as a regular part of the class, a new “turner” takes her carefully wrought wooden bowl to the instructor. The observer wants to shout, “NO!” but it’s too late. The instructor cuts the bowl in half with a table saw. By sacrificing the bowl, the student can better gauge its thickness and uniformity. Obviously, the artisan path is one of patience, persistence and continuous improvement. 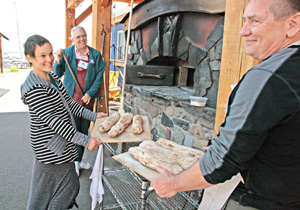 Jay says, “At the onset, one has an idea of what the finished project should look like. The steps are usually fairly simple to move from a piece of a tree trunk to a bowl. You first mount the blank, you form the basic shape, you create the detailed shape, then finish. In moving from the blank to the finish, you make many simple cuts, over and over, each one subtracting a small amount of material. You slowly watch your final vision taking form. There’s an adjustment here and there but there is always the rhythm, again and again, shaping and removing material until you’re satisfied. This rhythm, or flow, is like meditation for me, just breathing, watching, cutting.” It’s no wonder that many artisans feel what Hungarian psychologist Mihaly Csikszentmihalyi calls flow. His research found that people experience genuine satisfaction during a state of consciousness in which they are completely absorbed in an activity, especially an activity that involves their creative abilities.

In addition, a host of neurochemicals percolate in our brains when we’re crafting that stimulate the brain’s reward centers, according to Kelly Lambert, Ph.D., professor of behavioral neuroscience at the University of Richmond and the author of the book Lifting Depression. “There are neurochemicals accompanying all functions and activities of our brain from clicking on computers to woodworking and everything in between.”

For example, she says, “Serotonin, known to most as a neurotransmitter involved in mood regulation (and influenced by many antidepressant medications), has been found to increase during repetitive movements, which is interesting considering how hobbies involve so many repetitive movements.” She also lists dopamine, which is associated with pleasure, and specific hormones that are at work. “In animal models in my lab, as animals work to obtain their rewards, DHEA, a hormone implicated in emotional resilience, is increased.”

Artisan crafts also offer rewards in the form of interpersonal connections that reveal themselves at the end of each day at North House Folk School. Students gather around the fire pit overlooking Lake Superior or around a wood stove indoors to share a little about themselves and swap stories about their days, laughing about their challenges and what they’ve learned.

Among them there’s a father and his teenage sons who are learning blacksmithing together and a married couple tackling wood turning. They talk of the value of undistracted time together. 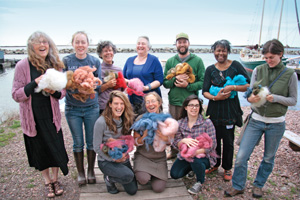 That fosters a spirit of cooperation that allows classmates to learn from one another. “There’s great supportive energy,” says Lisa Pilati-Warner, a John C. Campbell student from Minneapolis who took cooking classes. “You meet and mingle with people you’d never cross paths with otherwise. People make friends and they return year after year.”

Mark Hansen, a gregarious instructor and a founder of the North House Folk School, summarizes, “Folk schools connect people to a place, a culture, a tradition and to each other.”

There are more than 40 U.S. folk schools that make great destinations for a learning adventure. They usually place special emphasis on the traditional crafts and folkways of their region. Here are a few of the most well-known:

The Clearing offers weeklong, one- and two-day classes on its residential campus located on Lake Michigan on the tip of Wisconsin’s Door County. Its classes capitalize on natural surroundings and history.

The oldest U.S. folk school emphasizes the crafts of Appalachia and offers weekend and weeklong classes on its residential campus.

Features one-day and multiday classes with an emphasis on traditional northern crafts.

Ploughshare teaches the skills of sustainable agrarian culture in one-day and multiday classes on its campus and online. The program grew out of Homestead Heritage, an agrarian- and craft-based intentional Christian community.

Terri Peterson Smith is an award-winning writer, photographer and author specializing in travel, food and entertainment. Her work has been features in USA Today, Better Homes & Gardens, National Geographic and other publications.