One Alabama man has decided to counter rancor and discord country by offering free hugs–and blind faith in his fellow man. 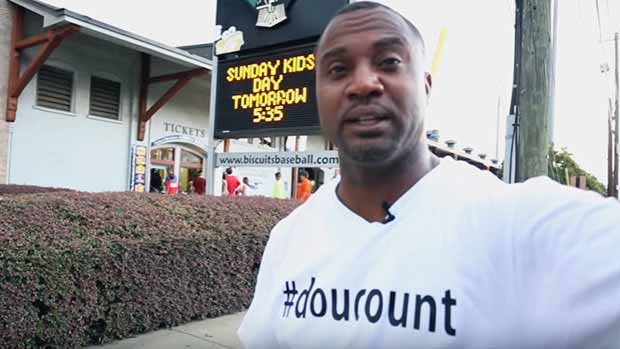 Alabama man who puts blind faith in humanity is rewarded with love.

David A. Sadler, a small-business man from Montgomery, Alabama, may have found the most cost effective way to share happiness. He was fed up with negative news, violence in his community and violence involving police officers in cities across the nation. David wanted to make a statement but didn’t know how.

He grabbed a friend with a video camera, went down to a baseball game and stood there blindfolded with his arms wide open. At first, people didn’t know what to think about this man with a T-shirt that asked #Doucount? just daring someone to make the first move.

But then, eventually, someone did. The first hug was a full embrace followed by others from men, women and children, both black and white. David says he could feel the tension drop as they were hugging and thanking him.

“How often do you get a hug? How often do you intimately hug someone?” David asks. “I am doing a lot better now that I am officially the hug guy, so I hug my wife every day. A hug is intimate….A lot of people don’t want to touch or even want to make eye contact. Or smile at each other. I am digging into people’s souls, with hope and humanity and saying everybody can use a hug.”

That’s it. A simple act and it’s free. It just takes someone to take the first step and the rest can be viral. So viral, that his videos have been viewed more than 5 million times on social media.

David wears a blindfold to make himself vulnerable. People can see him, open and inviting. David has no choice but to embrace whomever approaches him, and that is the point he is trying to make. He can’t judge you or reject you or find a reason to not interact with you. All he can do is hug.

“There is good in everyone and if you stay positive, people will meet you where are,” David says. “When confronted with a positive message, people will mimic you. It has changed my life tremendously.”

His belief and hope in humanity keeps him focused on doing the right thing and getting people to follow suit. He was one of six children raised by his grandmother in the Deep South. He has been profiled and judged by the color of his skin and it would be easy to be angry and frustrated. But he says he has nothing to complain about. He has a wife and three kids and runs a successful car service in Central Alabama and that’s what’s important to him.

He has also taken his hug show on the road. He tried the blind trust experiment in New York and even Washington, D.C., during the inauguration of President Trump and found that people in those places want the same thing, too: to live a good life and make the world a better place.

We all want the same things

“We tend to put everyone in a box based off the decisions they make but if you peel back the onion and get to know someone, you realize we all want the same thing, and we are not as different as we think,” David says.

The response to his hugs has been overwhelming at times, but he is not wasting this opportunity. He wants to help people and continue to spread positivity, especially to those among us who need it the most. He realizes he is only one man and can’t be everywhere, but if we follow his lead, he believes there can be great change. It’s ambitious, but David’s hope and self-worth have been restored because he took a leap of faith. What’s stopping you from getting out of your comfort zone and hugging someone you don’t know today?

Inclined to Be Kind

Start a Ripple of Kindness in Your Community