Volunteer effort is a reminder to those who serve that they are not forgotten. 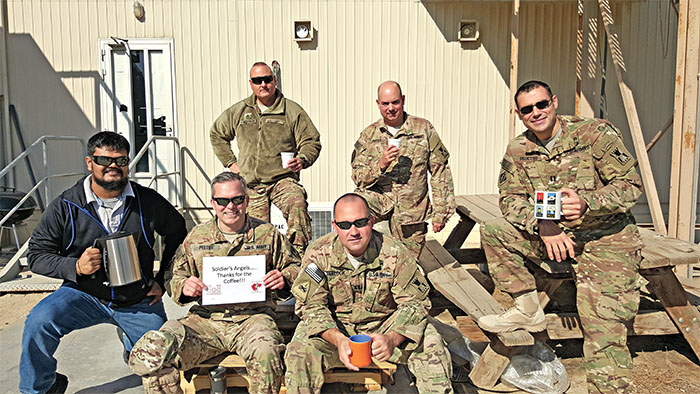 Volunteer effort is a reminder to those who serve that they are not forgotten.

Patti Patton-Bader, concerned for her son when he was deployed to Iraq in 2003, started shipping care packages to him from her home in Pasadena, California. When he relayed to her that many of his fellow soldiers were not even receiving letters from home, she and a group of neighborhood friends decided to take action. Soon, the whole platoon started to receive care packages and Soldier’s Angels was born.

“I wanted my son and his buddies to know that we cared and that they were going to make it,” Patti says. “It’s hard enough to be out there in a war without having an America that is not supporting them. To me, I was so thankful that people decided that we did want to support them and show them we cared.”

Since then, she says thousands of people have volunteered for Soldiers’ Angels and more than a million service members have been helped. “The soldiers got help because so many people stood up and said they cared,” she says. “They wanted to make sure no soldier went unloved, that they had supplies and backpacks, and if they were wounded, the families knew someone cared. To me, that’s the best feeling.”

Now, the organization offers a variety of programs including a letter-writing team, mobile food banks that feed veterans and their families, and even baby shower gifts delivered through its Operation Top Knot team.

“We call our volunteers Angels, and that is truly what they are,” says Michelle Julazadeh Chavarin, a communications manager and one of fewer than 10 people employed by Soldiers’ Angels. “They go above and beyond every day for our service members and in everything that they do.”

Soldiers’ Angels have shipped more the 800,000 care packages, handed out 33,000 blankets and sent 1.4 million letters. Support is given to the deployed, the wounded, the veterans and their families.

Michelle adds that Soldiers’ Angels is one of the few military nonprofits that works within the Veterans Affairs hospital system. She also says the feedback they repeatedly get from service members is that it means a great deal to them to know that complete strangers back home care enough to show their gratitude and appreciation for their sacrifices.
(Visited 37 times, 1 visits today)
Popular Articles