The joy was in full bloom as people around the globe celebrated the International Day of Happiness this year. 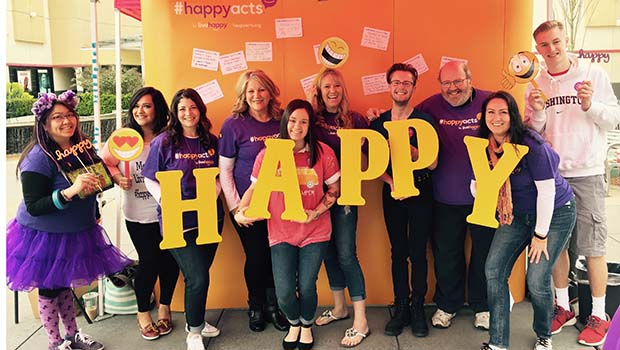 Celebrating the International Day of Happiness in Renton, WA on March 19, 2016.

Lively celebrations for the International Day of Happiness sprang up around the world this year!

The joy was in full bloom as people around the globe celebrated the International Day of Happiness. More than 70 cities hosted events and activities built around Live Happy’s #HappyActs Walls, where people could post a card that explained how they share happiness. (For each card posted, Live Happy donated $1 to that area’s Big Brothers Big Sisters chapter.) 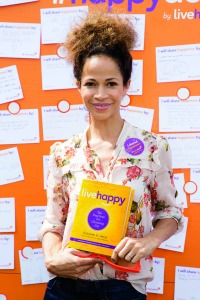 From Brazil to Honolulu—and many points in between—activities including live music, student performances, line dancing, face painting, interactive art events and more helped make the day fun, whether it was in New York City, Detroit, Los Angeles, Cincinnati or Dallas. In New York City, observance of the happiest day of the year began early with a panel discussion at the United Nations on March 17 about well-being and gender equality. Following the U.N. panel, Live Happy CEO and Co-Founder Deborah K. Heisz hosted a fireside chat in the U.N. Bookshop about her new book, Live Happy: Ten Practices for Choosing Joy.

And, just in time for the International Day of Happiness, the Sustainable Development Solutions Network released its 2016 World Happiness Report. The annual report, based on a survey of 156 countries, found that the U.S. had jumped up two spots in its overall happiness rankings, now landing at No. 13 worldwide. And, at celebrations all across the country, that happiness showed.

Waves of happiness in Manhattan Beach

Derek Edmonds, a Manhattan Beach, California, fire captain for more than two decades, knows what a joyful place this surf-side city is on sunny Sunday afternoons in spring. But even he was dazzled by the buckets of bliss he witnessed when he paid a visit in his firetruck to the Happiness Wall at the playground of the Manhattan Beach Middle School. “Look at all this!” he exclaimed.

He opened his arms to embrace a scene that included brightly costumed girls from the local Le Petit Cirque troupe walking on stilts; kids gleefully slurping snow cones, riding their tricycles or having their faces painted; and families wearing oversized orange or purple glasses posing for photos in front of the wall, the youngsters clutching balloons or blowing bubbles. 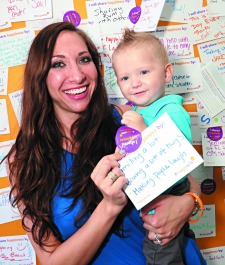 “I can’t imagine being anywhere else today,” Derek said. Neither could Sherri Saum, a star of the family TV drama The Fosters. “We can all use a little more happiness in our lives,” she said. “It’s a simple concept but a powerful one.” The mom of twin 2-year-old sons pledged to “fill my house with music” and “make a point each day to create a life of meaning and joy.”

Jeryl Prescott, an actress who’s been a frequent guest star on hit shows like Madame Secretary, Ray Donovan and The Walking Dead, came here with her 10- and 12-year-old sons. Before she turned to acting, Jeryl had earned a Ph.D. in literature and taught at Wake Forest University in Winston-Salem, North Carolina. Her happy act reflects her lifelong passion for education: “Teaching, learning and sharing with diverse populations.”

After posting their Happy Acts, many thirsty celebrators, including Mayor Mark Burton, made a stop at the lemonade stand that benefited the local Big Brothers Big Sisters organization. Big Brother Jackson Marshall had pledged that he would be “smiling more at everyone and making jokes that bring laughter to others.” But it was two little girls, 8-year-old Rachel and Maren, 7, who shared what was probably the truest way to spread happiness. “Letting anyone play with me,” Rachel had written on the card she posted to the Happiness Wall.

“Some people don’t have anyone to play with them,” she explained. Kids who are shunned by others are welcome to join Rachel in jump rope or four square, her two favorite games. A few minutes later, Maren wrote she would spread happiness by “including everyone.” When she sees a little girl or boy standing alone during recess, she poses a question that can stand as an example of generosity to us all: “Do you want to play with me?”

Smiles for umbrellas in Cincinnati

Chilly temperatures and a wet, windy day didn’t dampen the spirits of those who came out to celebrate at Fountain Square in Cincinnati.

Although rains swept through the area just as the event was about to begin, the small crowd simply huddled together under tents and waited for the weather to clear. “Even with the rain and the cold, we had an awesome day of sharing and spreading happiness in Cincinnati,” said Susan Holt, wall captain and co-chair of the Cincinnati event. “Lots of smiles and laughs! I was grateful to be part of such a wonderful day.” 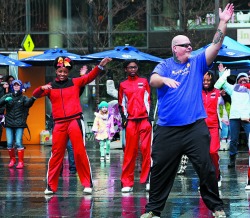 When the rains eased to a drizzle, cheerleaders from Shroder Paideia High School performed, leading the entire crowd in a cheer, “We are HAPPY!” “Big John” Drury, the “Dancin’ Trucker,” fired up the music and led everyone in a line dance that began with Walk the Moon’s hit, “Shut Up and Dance,” then led into Pharrell Williams’ hit song, “Happy.”

“It might be cold and wet, but that’s no reason not to dance,” Big John said with his ever-present smile. Who Dey, the mascot for the Bengals, joined the party, much to the delight of the crowd. He gave out hugs and posed for pictures, then he and Big John decided it was time for more dancing and took over the square to show off their moves. Judi Winall, a certified laughter yoga instructor, wasn’t about to let the weather keep the crowd from laughing.

“You can’t help but have fun when doing laughter yoga, regardless of the conditions around you, because it’s about unconditional laughter,” said Judi. She led the group, including Who Dey, in a spirited and hilarious session of laughter yoga. Laughter yoga led to, of course, more dancing, and the drum line from Withrow University High School also joined in the fun, showing off their skills on the skins and drawing more intrigued passersby. 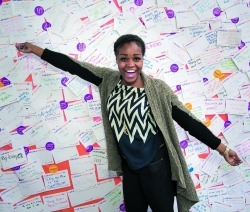 While the day didn’t go exactly as planned, Susan and her co-chair, Mary Miller, agreed that they had accomplished what they set out to do: raise awareness about the International Day of Happiness and bring more joy to the city.

“It was great to spread happiness, even when the weather did not cooperate,” Mary said. “That happens in life, and it is so much better to be focused on the result rather than the circumstances.”