How Mindfulness Helped Me Get Through the Las Vegas Shooting

I’m grateful for the tools that helped me self-soothe and show up in the world the way I want to–even during a catastrophe. 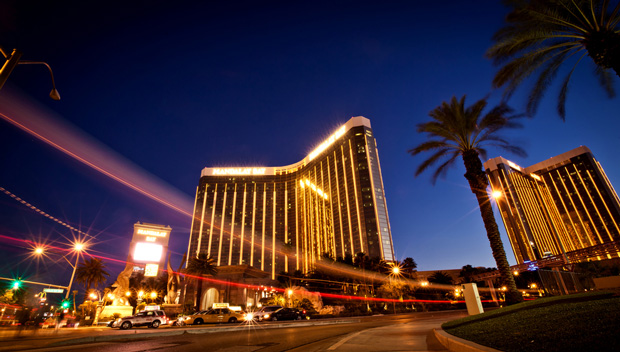 Sequestered in a hotel theater, I calmed myself with techniques honed over years of practice.

On Sunday, October 1, I was in Las Vegas—just 1,000 feet from the worst civilian shooting in U.S. history. I was safe, however, and I feel grateful. I am not suffering in the same way as so many people who were directly affected by the shooting.

I had come from New York City to Las Vegas to give a speech and two workshops. My best friend, Sasha, drove from Los Angeles to Las Vegas so we could spend some time together.

It was Sunday evening. We were on our way to dinner, and since we’re not into drinking or gambling, we thought we’d be spontaneous and go see a show. We booked last-minute tickets to see the Michael Jackson-themed ONE by Cirque du Soleil at 9:30 p.m. at the Mandalay Bay hotel.

The show starts…. Holy sensory stimuli! Bright lights, loud sounds, bodies leaping from the ceiling onto the stage. Acrobatics, artistry and just pure awe. We are nearing the peak of the show and the crescendo is building. Then the music slows and comes to a stop. They announce that due to a request from the hotel, the show is being paused and we should remain in our seats until further notice. Sasha and I look at each other thinking, “Hmm, is this part of the show? A pretend intermission?” They bring the house lights up, and we’re still sitting in our seats.

Clips of Michael Jackson’s music are playing on loop in the background, and then people start buzzing. Another announcement comes: Something is happening at the hotel, and we’re told to remain in our seats until they get more information. People start pulling out their phones.

Gun shots out of the Mandalay Bay hotel. Clear the area. Run if you can. Scroll. Video. People running.

It’s too much to take in. There we sit in our seats, locked in the theater until 6 a.m.

As a positive psychology and mind-body medicine expert, I’m grateful for the tools that helped me expand my lens, catch the moments of real-time resilience, and most importantly, self-soothe and show up in the world the way I want to—even during a catastrophe.

There were a few scares and heart-pounding moments, even in the safety of the theater. We didn’t know what was happening. And while news spreads fast on Twitter, so do rumors. We heard there were three killers, not one. That there were shooters running up the Strip. That there was an incident at the New York-New York Hotel…. And all we could do was wait.

Someone started pounding on the theater doors. “Everybody down!” was yelled out as we ducked for cover under our theater seats. We crouched for just a few moments until we were told it was safe. They let us out in rounds to use the bathroom as we needed. There were two families sitting around us with tweens. Sasha and I helped reassure them that everything was going to be OK, that we were safe. While there is scary stuff going on outside, we told the girls, we’re safe in here.

Staying in the Now

When there are unknowns, the mind is wired to wander into “What if?” land, to create negative stories and imagine terrible scenarios. Those are the moments we need to stay in the now. Over and over again, I would come back to my breathing, which brought me into the now.

I kept focusing my mind. I often quote Ben Zander’s book The Art of Possibility, when he says that one way to practice being nonreactive is to say, “How fascinating!” It’s neither good nor bad. Just a fascinating state of affairs. This moves us from unhelpful judgment and keeps us open and calm.

How fascinating that we chose to book this show two hours before it started. How fascinating to go from this state of feeling so moved by art and in awe of what people can do with their bodies to this heartbreaking scene.

I felt very aware of my heartbeat escalating and my adrenaline rising during some of the scary moments. They announced that someone in the theater had a gun. They asked the armed person not to, under any circumstance, draw the weapon. They reinforced that we were safe and everything was under control, and there was no need to draw a firearm.

“Five breaths per minute” came to my mind, and I filled my lungs and diaphragm with breath. It took a little while, but my heart rate calmed.

Fight, Flight and Shaking With Fear

There’s a time for hypervigilance—a time for all that adrenaline to be put into action. However, there was no use stressing in that moment because there was nothing to be done. I used my body to calm my mind. I encouraged the family behind me to do the same. The young girl started shaking with fear, which I told her is normal when the body gets that scared. Animals will fight, flight or freeze, but when hormone levels get really high, we shake. I told her dad to stroke the sides of her arms; that motion, combined with a gentle squeeze, can calm the nervous system. I, too, was stroking my palms—a technique called Havening—when the adrenaline spiked and I had to calm down.

We didn’t learn about the extent of the massacre until around 6 a.m., when they finally opened the theater doors. At first, we thought it was a rumor—more than 50 dead. Then it was confirmed. The intensity of the situation kicked in.

They were moving us out of the theater in groups of about a hundred at a time to either the airport or another shelter where we could catch a taxi to our hotels. It was beautiful to see how many people, while physically uncomfortable and frustrated, could reframe the situation. Yes, we were cold and exhausted, but more than anything, we were grateful we were safe.

Years of Mindful Practice Prepared Me to Stay Calm

People often ask me about my meditation practice. Do I sit every day? How long do I meditate? While I don’t sit in meditation every day, I do practice mindful moments hundreds of times a day. I train my breath and I notice the sensations of my body. While I’m far from perfect at it, it’s trying, traumatic times like this that remind me these practices work. It’s like tai chi, in which you practice tiny, very slow movements, over and over, so that when you need to, you can act instantly and instinctively. I’m grateful for every teacher I have had—from living mentors, to authors, to spiritual guides—for the skills they’ve taught me.

I could regulate my mind and body that evening because of my mind-body practices. I’m working on my emotions, as waves of sadness come over me about the lives lost and the many injured. This afternoon, I’m headed back to the hotel to volunteer for trauma support for victims and their families. I hope my sense of stillness can be of service, and that I’ll be able to hold space for what they’re feeling. If you would like to contribute and are not in the area, you can give money to a Go Fund Me that is raising funds to support the victims and their families.

Breathe. One step at a time. That’s all we have.

This blog first appeared on The Flourishing Center's website in slightly different form.

Emiliya Zhivotovskaya is the CEO and founder of The Flourishing Center, a New York City-based, Benefit Corporation (B-Corp) that is dedicated to increasing the flourishing of individuals, organizations and communities worldwide. She is the creator of the acclaimed Certification in Applied Positive Psychology (CAPP) program, currently offered in 12 cities across the U.S., Canada and online. She holds a Master’s Degree from the University of Pennsylvania in Positive Psychology and is currently pursuing her Ph.D. in Mind-Body Medicine from Saybrook University. Emiliya holds a PCC credential with the International Coaching Federation (ICF), as well as over a dozen certifications, ranging from yoga to Thai massage, biofeedback, motivational interviewing and more.