Transformational teacher and guide Srikumar Rao has designed a new path to reaching happiness that he calls CPM: Creativity and Personal Mastery. 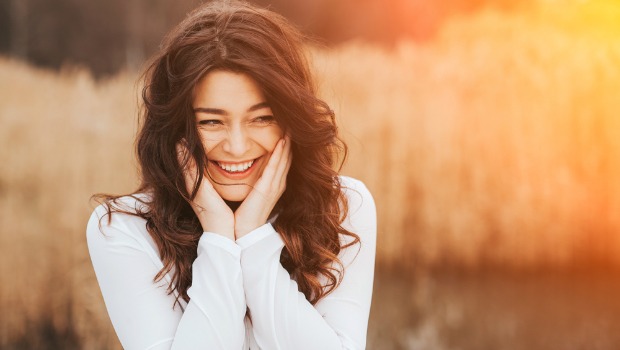 The transformational teacher lays out his 3 steps to a happier you.

When Srikumar Rao was growing up in India and later in Myanmar, he chafed against his mother’s penchant for finding the silver lining in any situation. “She was very spiritual and had a very upbeat outlook on life,” Srikumar says. Whenever anything bad happened, Jaya Rao would give thanks that it wasn’t a lot worse. “It used to really irritate me,” Srikumar admits.

That irritation persisted into adulthood. While attending Delhi University, Srikumar had an accident during a particularly fierce game of squash. Running at top speed to return a tough alley shot, he barreled into a wall head first. His glasses broke, the frame piercing his skin. He crumpled to the ground unconscious. Making matters worse, it was his birthday.

Jaya gave the events her usual sunny spin. She was so grateful, she told her son, that he’d been with someone who was able to take him to the emergency room. And how lucky he was, she continued, that the steel eyeglass frame had merely inflicted a flesh wound instead of gouging out his eyeball.

Decades later Srikumar would come to see the wisdom in what he calls his mother’s “bedrock optimism” and her faith in the benevolence of the universe. “I must have stored it somewhere,” he says. “What she was saying all those years suddenly made sense, and not just intellectually, but at a very deep level.” 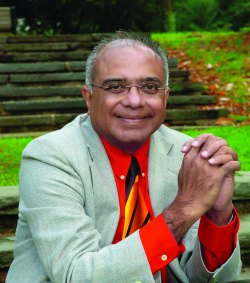 By then Srikumar was in his early 40s, teaching at Long Island University after he’d come to the United States to pursue his Ph.D. in marketing from Columbia University. At the time, he says, he felt burnt out and plagued by “gnawing insecurities, worries, anxiety, jealousies, irritations, guilt and apprehensions.”

He began to cull insights from a lifetime of voracious reading, everything from ancient religious texts to the 1971 best-seller Be Here Now by new-age guru Ram Dass. He pored over philosophy texts, spiritual biographies and volumes by big thinkers in leadership, mindfulness and flow. For good measure, he read the novels of the British humorist P.G. Wodehouse.

Pulling together these disparate threads, he developed a syllabus for a course with the ambitious goal of assisting people in transforming their lives—helping them to align their work with their interests and values, move toward optimism and warmer relationships and reconnect with their spirituality. “It was the course I needed for myself,” Srikumar says.

He wasn’t alone. Since 1994, thousands of people have taken the program Srikumar would come to call “Creativity and Personal Mastery,” or CPM for short. After teaching CPM at Long Island University and then Columbia University, he began offering it privately through The Rao Institute, largely to business executives and entrepreneurs. The exclusive course takes place over three highly intensive and interactive weekends and costs thousands of dollars.

Now, at 65, Srikumar says he is eager for his work to reach a larger audience. “The reason I do what I do is I want everybody to get up in the morning and say, ‘Yippee!’ ” Inspiring those yelps was his motivation for recently self-publishing a paperback version (with an updated bibliography) of his book Are You Ready to Succeed? Unconventional Strategies for Achieving Personal Mastery in Business and Life, which originally came out in 2005.

Your life did not just happen,” Srikumar says. “You experience life exactly as you have fashioned it. If you are unhappy with where you are, you can deconstruct the parts you don’t like and build them up again.”

What keeps us from feeling “radiantly alive,” Srikumar says, is that we have spent our entire lives learning to be unhappy. Tripping us up are what he calls “mental models,” a jumble of fixed ideas about how the world works and how things should or shouldn’t be done that don’t serve us well. The book guides readers through a series of exercises that will help them become the architect of a life brimming with joy and fulfillment.

Here are three exercises to kickstart your transformation:

1. Try out an alternate reality

Divide a page into four columns headed “family,” “work,” “love” and “self.” For the next 10 minutes, without stopping, scribble down the first beliefs that come to mind under each of these areas. They can be anything at all. For example, “My boss always belittles my ideas” or “I’m too old to find love” or “I could never get hired for the kind of job I want.” Now, looking over your list, choose a situation troubling you right now; perhaps it’s working for your supercritical boss.

Develop an alternate reality you can plausibly believe. You might not be able to accept that your boss is trying to encourage you to sharpen your ideas. But maybe you can be open to the possibility that having a difficult boss will give you the skills you need to excel in a competitive field. Over the next week, live as if the alternate universe you have created were real. Write down every piece of evidence that supports this parallel world. You might describe how your boss scoffed at something you said in a meeting and how you rose to defend your point of view.

The payoff: In your alternate universe, you do not hand over your ability to be happy to someone else. Instead, you retain the power to focus on what’s important to you and you appreciate the strengths and resilience you gain from challenges. “As you live in one of these realities that you select,” Srikumar writes, “you will initially feel as though you are playacting. As you persist, that feeling of faking it will go away and it will actually become your new reality.”

Read more: Are You Sabotaging Your Self-Esteem?

2. Swap the voice of judgment for a detached witness

Devote two weeks to becoming aware of your “voice of judgment.” Srikumar says that this voice is one of the most common and pernicious types of “mental chatter” that plays in the backgrounds of our minds. The voice of judgment “does a darn good job of  flattening you,” Srikumar says. Sometimes it puts you down directly: “You’re going to really mess up this project and be exposed as the big fraud you are!” Other times, it compares you unfavorably to someone else: “Carol is so quick on her feet; if you’d been asked that question in the meeting, you would have been tongue-tied and stammering.”

Start observing your voice of judgment. It can be helpful to set your smartphone to beep every hour as a reminder to jot down your observations. Pay attention to how often you berate yourself and the impact this has on your ability to stick with a difficult task or stay engaged with other people. Don’t beat yourself up as you notice the negativity of your thinking; that will only increase the volume of the voice of judgment.

The payoff: Your observing self is what Srikumar (and many teachers of mindfulness and meditation) calls “the witness.” Making friends with this dispassionate spectator shows you with clarity the many ways in which you undermine yourself. As you gain practice in cultivating your witness—and it’s a lifetime quest—you’ll be able to move through your days with much greater mindfulness and confidence.

Read more: Give Yourself a Mindfulness Makeover

3. Invest in actions rather than outcomes

Remember a moment when you experienced such extraordinary beauty that it took you outside yourself and to a place of great serenity. Perhaps it was a sunset. You didn’t say, “That’s a beautiful sunset, but it’s kind of off-center and if I could move it 200 yards to the right and Photoshop out some of the clouds, it would be so much more beautiful.” No, the off-center sunset was just fine. And in that rare moment of accepting the universe just as it was, Srikumar says, your innately happy nature bubbled up. Srikumar’s many years of study and of teaching have convinced him that our inborn nature is firmly tilted toward joy.

Try to bring this mindset of acceptance to your daily life. It won’t be easy. For most of us, our default attitude on happiness is based on the “if-then” model: “If I get that big raise/have a second baby/spend a month in Bali, then I’ll be happy.”

There are lots of problems with this way of thinking. For one thing, we’re pretty bad at predicting what will actually bring us happiness, as Harvard psychologist and researcher Daniel Gilbert, Ph.D., showed us in his book Stumbling on Happiness. For another, we can’t control outcomes. A better strategy: Let the goal you seek give you direction, but invest yourself completely in the process. That means do the best you’re capable of, without worrying about the end result, and embrace where the journey takes you.

The payoff: You move through life with a greater sense of tranquility and purpose. “If you succeed in achieving your outcome, wonderful,” Srikumar says. “And if you don’t succeed, still wonderful, because now you have a new starting point, and from that new starting point, you select another outcome and keep going. And when you do that, you will find that every day is a blast.”

Shelley Levitt is a freelance writer based in Southern California, and an editor at large for Live Happy magazine.