The International Day of Happiness 2017

Find out how you can get involved in this year’s festivities for the International Day of Happiness. 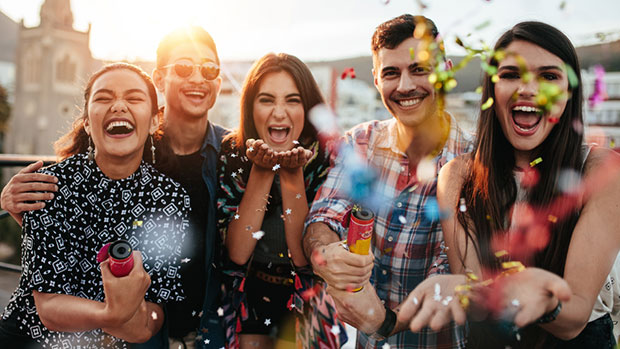 Why it matters and how to get involved.

Bea Simmons West had one final request for her daughter Zoe Morris before she passed away on March 19, 2015. Whatever happens, she told Zoe, I want you to be at the happiness wall.

The year before, Zoe and a few colleagues had erected a giant orange wall on the campus of the University of Pittsburgh and invited passers-by to write down how they share happiness. It was the first year of these happiness walls, an initiative Live Happy had launched to celebrate the International Day of Happiness, which the United Nations had decreed in 2012 would be observed on March 20 every year. No one knew what to expect in Pittsburgh or at the 29 other walls that were being put up in cities across the country. Would people scoff and keep walking? Would only a few cheery folks stop to share what brings them joy? 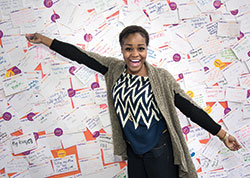 In Los Angeles and New York, Chicago and Detroit, Dallas and, yes, Pittsburgh, those big orange walls turned out to be magnets for merriment. “We had some 500 people stop and post things,” Zoe recalls. “Teachers wrote about the students that make them happy. Kids wrote about their love of sports or their love for their moms. A lot of people wrote about what they would do to make other people happy. We laughed about one student who wrote that he was going to try harder to like his roommate’s girlfriend.”

The next year, on March 21, 2015, two days after her mother’s death, Zoe was once again hosting a happiness wall. “My mother lived her life to serve others and to make others happy,” Zoe says. “And she was still taking care of me that day. The grief was there, but it was good to be around people who were filled with great energy because they were spreading happiness. And that, of course, was my mother’s intent. She had loved the idea of the happiness wall and she knew the joy it brought me.”

A day to come together

Deborah K. Heisz, co-founder, CEO and editorial director of Live Happy, says what Zoe describes is what the International Day of Happiness is all about and is why Live Happy celebrates it the way it does, encouraging people to take a few moments out of the chaos of their daily lives to visit giant orange walls and come together through acts of kindness and love.

“Sharing happiness is not just one day or one promise written in magic marker and placed on an orange wall,” Deborah says. “It’s a way of living that honors our common humanity and reminds us that it’s in our power as individuals and communities to change the world for the better with small acts that shift a moment to the positive.

“Happiness as we define it embraces suffering and human connections, growth and possibility and gives us the courage to live fulfilling, authentic lives. It is about what matters most in life, and that’s why it means so much to us to see how many lives just one wall, one conversation, one hand-written card can touch.” 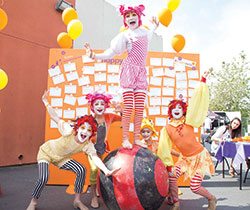 Every year, the number of happiness walls has grown. In 2016, there were 100-plus walls in schoolyards, malls, office parks, town squares and airports in 70 cities around the world from Rio de Janeiro and Vancouver, British Columbia, to Honolulu and Mexico City.

Dance troupes, acrobats, stilt walkers, local bands, face painters and balloon artists, as well as people posing in front of the walls with feather boas and oversized orange and purple sunglasses, have all become a part of the annual celebrations.

But the real power of Live Happy’s celebration of the International Day of Happiness is quieter, sometimes even invisible. It lies in the pledges people of every age make to champion happiness through small deeds of kindness, generosity, gratitude. Live Happy calls these #HappyActs. Smile more. Make two lunches and give one away. Tell your friends what they mean to you. Help a neighbor with a chore. Donate crayons and coloring books to a children’s hospital.

Every day during the month of March, Live Happy suggests different types of #HappyActs that people can perform and share. In the largest Day of Happiness campaign in the world, these #HappyActs spread from person to person, family to family, gathering strength in communities and cities, countries and continents. Since Live Happy's first celebrations in 2014, thousands have shared authentic images of what makes them happy, online and on walls, and, in turn, tens of millions of people globally have been touched.

Last year, Zoe hosted a wall at the Ohio Valley Mall, not far from her hometown of Moundsville, West Virginia. “It was everything I wanted to accomplish and more,” she says. “For three days we had flashing Day of Happiness billboards on the interstate. There was music from 9 in the morning until 7 at night, with a new local performer every half hour. Vendors donated cookies for kids to decorate. Everyone got involved. It was the anniversary of my mother’s death and what would have been a terrible day was instead a beautiful day of happiness.”

A young child shared a happy act that perfectly captured the spirit of community and caring. “If somebody falls down,” she wrote, “I will ask if they’re OK and help them up.”

Shelley Levitt is a freelance writer living in Los Angeles and editor at large for Live Happy.