Write Your Way to Well-Being

This 20-minute practice can make you happier, healthier and more resilient. 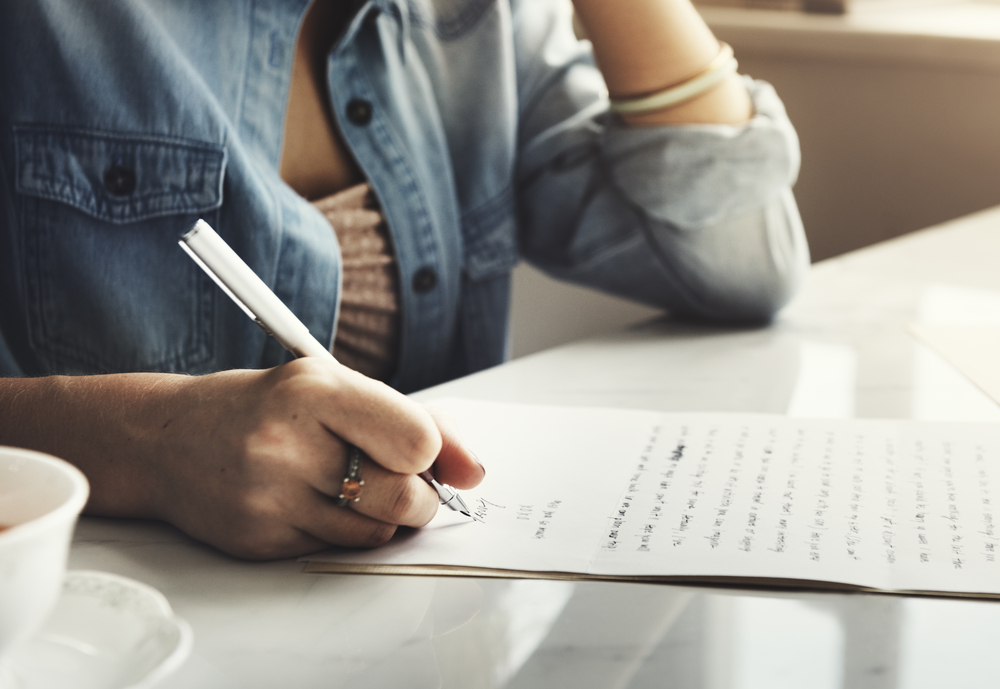 This 20-minute practice can make you happier, healthier and more resilient.

The 25 women who had gathered in a windowless Seattle classroom for a writing workshop scribbled furiously for more than two hours in response to instructor Rachel M. Fiala’s “prompts.” In 10-minute sprints they wrote about difficult goodbyes in their lives, about their definitions of beauty, about what the sound of rain reminded them of.

At the end of class Rachel gave her students an exercise in self-expression and self-discovery known as expressive writing: Over the next four days, for 20 uninterrupted minutes each day, write down your deepest feelings about an emotional upheaval in your life.

Tonya Wilson, one of the most enthusiastic students in the class, would write about her mother abandoning her when she was 13. “The exercise was powerful,” she says. “I got to witness myself as that shattered 13-year-old.” Two years have passed since that writing assignment, but, Tonya says, “Talking about it today I can still feel the lump in my throat. I still mourn for that young girl and I think I always will, but now there is someone mourning for her rather than stuffing her in a closet and refusing to acknowledge her existence and her pain.”

That first expressive writing assignment spurred a life-changing turnaround for Tonya. It all took place at the Washington Corrections Center for Women, the state prison where she has been serving time for attempted murder in the first degree since 2002.

The Power of Personal Storytelling

Expressive writing is a highly structured storytelling technique that guides people to describe their deepest worries and most troubling memories, find new meanings in these experiences and then go on to envision bolder and happier futures for themselves. It was developed in the mid-’80s by researcher James (Jamie) W. Pennebaker, Ph.D., now the Regents Centennial Professor of Psychology at the University of Texas at Austin, who was investigating the health impact of a wide range of traumatic experiences—the death of a spouse, natural disasters, sexual or physical abuse, divorce, the Holocaust. He discovered that writing about these traumas in an open and emotional way led to significant improvements in both physical and psychological well-being.

Over the past 30 years hundreds of studies have confirmed the benefits of expressive writing. It helps reduce cancer-related symptoms and fatigue, increases immune functioning. leads to fewer doctor visits and enhances memory and sleep. College students who took part in expressive writing improved their grades and were less likely to drop out. Married couples who explored their conflicts through expressive writing were happier in their marriages than their non-writing counterparts.

What’s more, expressive writing enhances your well-being in both the short and long term. Immediately after writing about an emotional topic, people had lower blood pressure and heart rates. That was still true months later. Likewise, symptoms of depression, anxiety and rumination declined in the weeks and months after writing about emotional upheavals.

Expressive writing can even improve your social life. In an innovative study that Jamie led in 2001, each participant was asked to wear a small tape recorder before and after writing about a deep-seated emotional issue. The results showed that in the weeks after the writing experiences, people were more outgoing, laughed more easily and more often and used more positive emotion words. Writing from a deeply personal place, Jamie concluded, seemed to make people more socially adept: “they were better listeners, talkers—indeed, better friends and partners.

How to Do It

1. Set aside at least 20 minutes over four consecutive days for writing. Try to write at the same time each day. The best time to write is when you’re not feeling hurried. You can write in a notebook, a pad, a computer.

2.   Write about the issues, conflicts, stressors or upheavals that are keeping you up at night. That can be something that’s happening in the here and now or an experience from the past that still troubles you. (If you’ve faced a huge loss or trauma in the last couple of weeks, it may be too soon for you to write about it.)

3.  Write continuously once you begin. Don’t worry about spelling or grammar. If you want to keep writing after 20 minutes, go ahead. But plan to write for a minimum of 20 minutes.

4.  Really let go and write about your deepest thoughts and feelings around the issue or event you’ve chosen. You can write about the same topic every day or different topics. Explore how the event is tied to other areas of your life—your childhood; people you’ve most loved, feared or felt the most anger toward; your relationships with friends and family; your work life.

5. On your final day of writing, reflect on what you’ve disclosed over the previous three days. How can the meaningful story you’ve constructed help guide your thoughts and behaviors moving forward? Write about how the event is related to who’d you like to become.

6.  Think of expressive writing as a tool that’s always available to you. While it doesn’t replace medical or psychological help when you’re going through a true crisis, a “booster session” can be helpful when you find yourself stymied by a work or personal challenge.

The Science Behind the Stories

What is it about expressive writing that makes it so effective? “It’s complicated,” researchers say. Joshua M. Smyth, Ph.D., is a professor of biobehavioral health and medicine at Penn State and co-author with Jamie of the upcoming book Opening Up by Writing It Down, Third Edition: How Expressive Writing Improves Health and Eases Emotional Pain. “It seems to help a lot of things a little bit,” Joshua says. It helps people regulate emotions a bit. It helps social relationships a bit. It helps people find their purpose in life a bit, and so on. These small changes feed off one another and over time it leads to big improvements in well-being.”

Timothy D. Wilson, Ph.D., the Sherrell J. Aston Professor of Psychology at the University of Virginia and author of Redirect: Changing the Stories We Live By, sees expressive writing as one technique of what he calls “story editing.” We all have personal narratives, he says, about what the world is like and who we are. Sometimes we develop pessimistic stories and get caught in self-defeating thinking. Revising our stories can help us view events through more optimistic lenses and that, in turn, can lead to positive and lasting changes.

“Expressive writing helps us reframe events and our history,” Timothy says. “When you try out a different interpretation that shows in your behavior and your attitude and when you realize a payoff, you build on that new behavior.”

This type of writing goes deeper than what most of us think about as journaling. That certainly was the case for John F. Evans, who leads expressive writing workshops at Wellness & Writing Connections in Chapel Hill, North Carolina. He’s also the co-author with Jamie of Expressive Writing: Words That Heal. But before he became familiar with Jamie’s work, John had maintained a journal, on and off, through high school, college and early adulthood.

During these years he suffered from depression and it wasn’t until he was 40 that he took his first expressive writing workshop. He wrote about something that had remained a never-discussed family secret: the death of his sister when he was 3 years old. Though he would also seek out psychotherapy, the writing, John says, was the beginning of emotional restoration. “I was able to write about my deepest feelings, construct a meaningful narrative and then write about how I wanted to go forward,” he says. “It gave me a measure of control over my life.”

That sense of control and narrative was missing from his journals. “When I went back and re-read them,” he says, “I realized they were mainly a place to vent. I kept writing about the same thing in the same way, using the same language. There was no arc in my story; it was a flat line. I was just ruminating on paper.”

People who benefit the most from expressive writing use certain types of words throughout the exercise. Their writing includes more positive emotion words, such as love, funny, joy, courageous, calm and thankful, indicating that even while they’re acknowledging painful experiences they’re able to see the upsides. As they move from the first day of writing through the fourth, they go from using mostly first-person pronouns (I, me, mine) to incorporating he, she and they; that shows they’re viewing their emotional upheavals from different perspectives. And, as the days pass, they also sprinkle their writings with words like understand, realize and know, evidence that they’re able to find meaning in loss or distress.

When we’re able to “repackage” a stressful event into coherent stories, a couple of important things happen. First, we move toward a sense of resolution that gradually diminishes the power and pain of the disturbing experiences. (Those of us who are brooders and ruminators are especially likely to benefit from expressive writing.) Secondly, we’re less likely to experience intrusive thoughts about the experiences, the kind that disturb our sleep, wreck our focus and even make us less able to stay connected with other people. It’s the equivalent of shutting down those apps that run in the background on our smartphones draining battery life and slowing performance.

Two months after she began serving her sentence, Tonya, in wrist and ankle shackles, would attend the funeral of her mother, who died of her decades-long drug addiction. From her first expressive writing assignment through many more, Tonya struggled to understand and forgive her mother. As she wrote she began to heal. “Expressive writing,” she says, “allowed me to see that my life has a purpose and my pain has a purpose.”

She began to see her future as working toward prison reform and real, effective rehabilitation for inmates and others at the margins of society, including addicts. Transformation, she says, can take place only within a support system that sees the value and promise of every life and where people have a stake in each other’s success.

In 2015, Tonya described her vision in a poetic and passionate TEDx talk. “True rehabilitation,” she said, “occurs through connections with others. Every time I’ve gotten better it’s because I’ve seen the possibility of healing or strength in another person. Every time I’ve been the model for someone else, lives have changed.” She would conclude her talk to a standing ovation. “Don’t underestimate the value of your own story simply because there is suffering it in,” Tonya said. “You may just be the catalyst for someone else’s rehabilitation. Continue with patience, with compassion and with an open heart.”