The bonds of friendship and a commitment to care for those in need fill these gardeners with a deep sense of joy. 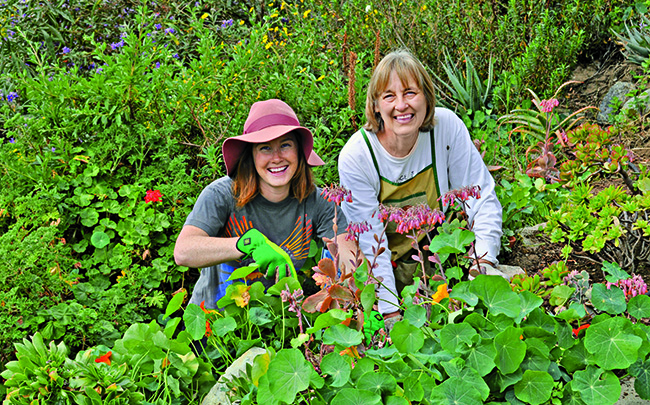 The bonds of friendship and a commitment to care for those in need fill these gardeners with a deep sense of joy.

After a day full of sunshine, the deep scent of rich, moist earth gently rises over the coastal community garden of South Laguna, California. As far as the eye can see, every one of the 54 raised beds that surround Katie Babcock is overflowing with lush, green vegetables—beans, chard, arugula and beet greens. Tomato plants bolt up climbing towers toward the sun, potatoes send up sturdy green shoots to feed tubers underground, and there’s even a rumor that blueberries are setting tiny fruits that will one day—please God!—end up in a pie.

Some days it’s glorious just to be alive, and moving through the raised beds perched high on a sandy bluff above the Pacific Ocean is rapidly becoming one of those days.

Tucked among the village’s shops and homes, the garden is a gathering place in which Katie and about 100 local gardeners grow vegetables, herbs, flowers and fruits for their families—plus enough vegetables to help meet the needs of Friendship Shelter, a six-month residential program for the homeless.

They also gather for community potlucks, gardening workshops and work parties. But whether they’re eating, weeding, watering or just burying their noses in gardener Silia Hatzi’s roses, it’s clear that the group members are united by their love of dirt, the bonds of friendship, the healthy promise of fresh vegetables, a commitment to care for those in need—and the clear sense that what they do here on the bluff infuses them with a deep sense of happiness.

“Getting in the soil and making a bit of a mess and seeing a finished product is a joyful experience for me,” acknowledges Katie, an Australian production assistant who moved last year to South Laguna. “I grew up on a farm, and I really missed helping things grow. And not having a family here, well, I’d say the gardening community has become my family away from home.”

She laughs just thinking about the cast of characters she’s found working in the South Laguna garden. “The people are so kind, so encouraging, so welcoming—it’s given me a sense of place and purpose in the community. The days when we all get together and work and have a laugh…that’s who I am,” she says.

Sally Coffey, a retired college administrator who works with new gardeners, couldn’t agree more. When Sally decided to hang up her academic gloves, she realized that she’d been so busy for so many years that she didn’t even know her neighbors. “In this area, you either have to have a kid or a dog to get to know people,” she says. “I was concerned I wouldn’t have any friends to talk to once I left the college. Then one day I went to get breakfast at a coffee shop. I passed a bulletin board with a note on it that said some people were opening a community garden. They had one raised bed plot left. Well, I’d always loved the loamy smell of dirt—and when I was little, right after a rain, I’d go out and lick the sidewalk.”

So Sally called the one name on the note that she recognized, then ran over to his office and signed up for the plot. But not only did she get the plot, she got an invitation to the guy’s Halloween party. “He’d invited everybody in the neighborhood, including all the gardeners,” Sally recalls. “I didn’t have a costume, so I just ran home, painted some whiskers on my face and went.

I met a bunch of people from the garden. The next day I went down to the garden with them and built boxes for the raised beds.

She smiles. “It was instant family.”

The Love of Dirt

Hanging out with a bunch of great people in the fresh, coastal air is enough to make anyone happy. But scientists have long suspected that we also have an innate attraction to nature that has evolved over the millennia—and that just walking into a garden or contemplating a flower has the ability to trigger a cascade of neurotransmitters that balance us and bless us with happiness, according to the 2013 article “Gardening as a Mental Health Intervention: A Review” in the Mental Health Review Journal.

Some suspect that being in an environment with water, woods, plants and other natural materials that enhance our survival triggers this effect, while others wonder if being in a natural environment simply distracts us from the sometimes obsessive challenges of daily life, captivates our attention, shifts a bunch of neurotransmitters and allows us to relax.

But distraction, at least the type that captivates our attention in a kind of total absorption that psychologists call “fascination,” isn’t the looking-at-your-watch kind of thing. It’s far more intense, and the effect is as well.

“Watching a butterfly land on your hand or the wind moving through the trees—these are the kind of distractions that allow the brain to reboot itself,” explains Jean Larson, Ph.D., lead faculty for the University of Minnesota’s Center for Spirituality and Healing, and manager of the university’s nature-based therapy arboretum.

Ancient and modern brain systems trigger electrical impulses. The neocortex—the part of the brain responsible for complex thinking and reasoning—becomes engaged, and the brain’s synapses start firing on all cylinders. It’s a kind of neurological rebalancing act that, as Jean says, “allows us to be in our happy place.”

Whether the calm happiness you feel in nature is the result of simply being in a life-supporting environment or rebooting your brain, the effect is powerful. Studies reveal that those who spend time in nature are less likely to be stressed or depressed, and that a few minutes working in a garden—even simply walking through one—can reduce severe depression and increase the ability to think, remember, plan and function. In a Norwegian study, for example, those with clinical depression who participated in a horticulture program cut their depression by 30 percent and increased their ability to think and function effectively by 14 percent.

Given those kinds of numbers, it’s heartbreaking to realize that most of us spend around 95 percent of our time indoors. Jean shakes her head. “We’re so disconnected from nature,” she says. “Yet researchers in Scotland have shown that it only takes 30 minutes of being in nature each day to have an effect on how we think and feel.”

Carly Sciacca, a full-time mom who grew up in Laguna Beach as the daughter, granddaughter and great-granddaughter of serious gardeners, is well aware of the spiritual and emotional effects of gardening. “The garden is so joyful,” she says, “and gardening is so therapeutic, particularly when you go through hard times.”

That’s one of the reasons Carly brought her daughter, 7-year-old Alani, to plant, water, weed and harvest in the South Laguna community garden. Carly wanted Alani to know that when she hurts, she can drop her problems at the garden gate and get comfort from digging her hands in the soil. She can meditate on a ladybug, sit in the sun and breathe with the rhythm of the earth.

But Carly also wanted Alani to discover something else in the garden—the joy of helping others. According to the United States Department of Agriculture, more than 49 million Americans are not sure where their next meal is coming from, while nearly 7 million are already hungry.

A natural organizer, Carly established a raised bed plot called “The Children’s Sharing Garden,” and invited parents in the community garden to bring their children to the plot every Sunday morning. Fifteen families responded, and Sunday mornings in the South Laguna garden have become a busy time. The children do most of the work—planting, weeding and meditating on the texture, smell and shape of everything that grows. It not only gives them an opportunity to immerse themselves in nature, but to also experience the joy of growing food for their families and others as well.

It took the parents a while to sort out a delivery system, but now every Thursday, Carly, Alani and a group of volunteers gather fresh vegetables from the children’s garden and from a community plot dedicated to raising food for the hungry. They place their bounty on a large table, bag their offering, then take it to the Friendship Shelter for distribution. Some of the vegetables go straight to the shelter’s kitchen where guest chefs prepare them for those enrolled in the shelter’s residential program for the homeless, while other vegetables are transported to area food shelves.

Kids are a big part of The Giving Garden in Carrollton, Texas, as well. Daisy Girl Scouts, Eagle Scouts, National Honor Society students and children from the Aldersgate United Methodist Church all take a turn at cleaning up garden beds, composting, planting, mulching, harvesting and performing the 101 chores a garden demands.

“We work these kids hard,” says Terri Barrett, a member of the garden’s board and director of missions at Aldersgate, “but they sign up and come back again and again.”

What seems to draw the Carrollton children is the same thing that draws their elders—a strong sense of service to others. Every week—and pretty much year-round because of the moderate Texas climate—both kids and adults can be found bent over an acre of raised beds behind Aldersgate. Fifty percent of everything grown in the garden is given to local food shelves or needy seniors. Since the garden was founded five years ago, its volunteers have contributed 6,000 pounds of fresh produce to feed the hungry.

“A few years ago a pastor here at the church realized that the back acreage of the church’s property was just sitting there not doing a thing,” Terri explains. “So he suggested it be used for people who don’t have enough to eat. People at the church thought it was a great idea, so we figured out how we could use the land, drew up a plan, and joined with Keep Carrollton Beautiful, which is the garden club for the community.

“Keep Carrollton Beautiful became our umbrella organization so we could have nonprofit status,” Terri adds, then both the organization and the Aldersgate church donated funds. A number of individuals also contributed to the garden, and local businesses were generous. It was a true community effort.

“Finally, in 2010, about 100 people—gardeners, architects and people like me who didn’t have a clue about building a garden—we all got together and built the first beds.

“Now, the garden is where I find serenity and peace,” says Terri as she looks out over beds overflowing with lush, green vegetables. “It offers us the sense of community that we’ve lost in the electronic age. People meet and talk, we make friends with people of all ages and ethnicities we otherwise wouldn’t know, and we feed those who are hungry.”