Dear Mom, I Love You

Just in time for Mother’s Day, the new book “A Letter to My Mom” features a wide range of heartfelt letters of love and gratitude to the person who has given us love and acceptance throughout life. Contributors include Oprah, Robin Roberts, Kristin Chenoweth and many others—as well as moving stories from non-celebrities.

New book features letters to mom, with love and gratitude

A Letter to My Mom is a collection of dozens of heartfelt letters written by both celebrities and non-famous people, celebrating the sacrifices and unconditional love we often take for granted. Contributors include Oprah Winfrey, Kristin Chenoweth, Robin Roberts, Tyler Perry and many others.

Live Happy sat down with editor (and former Oprah producer) Lisa Erspamer to talk about the book:

What inspired you to write this book? 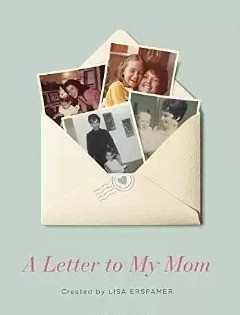 The first book I did in this series of “Letters to,” was about my dog, and it was really a fluke. But I fell in love with the concept of writing letters.

When my father was dying, he wrote each of us a letter, and it was one of the most amazing things I have experienced. I believe a letter is the best gift—and certainly the most emotional gift—you can give and get.

Do you think letters are important in the age of email?

I love technology but I do think we’ve become very short-form. It doesn’t have to be handwritten—it could be typed, it could be emailed. We move so fast and everything is so quick and short, it’s not the medium that’s important to me, it’s the emotional content.

Every person who participated in this book was vulnerable and intimate when they wrote their letter. For people whose moms are not here, it was a cathartic experience. It brought them back to all the things moms do for us, all the sacrifices they make.

What things do you think people want to express to their mothers that they have trouble saying face-to-face?

I wouldn’t let my mother read the letter in front of me—it was that emotional and vulnerable.

“I love you” I think is one thing many people won’t say in person. We also forget to tell our Moms “thank you.” We take our moms for granted—that was a big one.

What was the most striking thing you heard when doing this book?

There is a young man who wrote a letter to his mom who had been slowly dying of cancer and died when he was 13. He wrote about how every day of his life his mom read him the book I Love You Forever. The last night of her life, she asked him to read it to her.

To see a video of one unbelievable story of maternal love sacrifice, click here.

Whose letter was the most surprising? Why?

Suze Orman, who is a very good friend of mine, surprised me with how open and honest she was willing to be. She wrote about how her mom and she were inseparable when she was a little girl, constantly saying “I love you.” But when she got older, her mom stopped saying it, and it was because she didn’t accept her being gay. Her mother lived to be 99 years old. But it was interesting because Suze chose to believe that her mother loved her anyway, but she just wasn’t expressing it in the same way anymore.

Tell me about Kristin Chenoweth’s letter.

First of all, Kristin is one of the most amazing people—pure joy. Her mom supported her dreams and made her believe she could be anything. I think that had a huge impact on her life and what she was able to become.

What about Melissa Rivers?

Melissa is an amazing human being and her letter is fantastic—so witty. The beautiful thing is, she gave it to Joan so that Joan got to read it before she died. And then soon after that, Melissa read it at her funeral. The letter is funny and reminds you of her mom and the love between them.

Lisa Erspamer is the former Chief Creative Officer of OWN and Co-Executive Producer of the Oprah Winfrey Show. She plans to produce more than a dozen more titles in the “Letters” line of books.

Get out tips for making this Mother’s Day the most memorable yet.