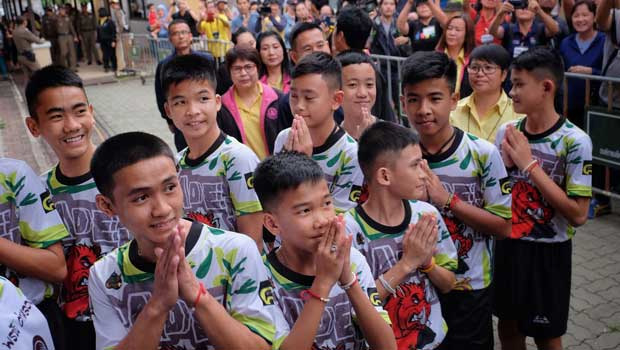 For 17 days, the eyes of the world were on Thailand. There, 12 young men, ages 11–16, were trapped in a pitch-black, flooded cave with the very real possibility of never coming out alive. As I reflected on their incredible rescue story, I couldn’t help but hear whisperings of ancient wisdom—wisdom steeped in powerful spiritual and ethical teachings that still ring true today.

A sign outside the cave warns visitors not to enter during the months of July through November, the area's monsoon season. Assistant soccer coach Ekkapol (“Ake”) Chantawong had taken his team to the Tham Luang cave earlier in December. This time, a week before July, he took them there after a day’s soccer practice to celebrate one of the boy’s birthday, planning to stay for just an hour. Mother Nature had a different plan, though; a flash rainstorm drove them deeper inside the cave.

It was this one seemingly simple act that proved to be an extreme example of how our every action takes place in a dynamic chain of countless reactions and interactions. Dr. Martin Luther King Jr. once referred to our being bound together in an inescapable network of mutuality. In Thailand, they might call it the network of karma. In a matter of days, a simple visit to a cave mobilized 10,000 people—including 2,000 soldiers, 200 divers and representatives from 100 government agencies. The lesson to be learned? Our lives are not separate; one life can affect tens and hundreds of thousands.

Now, let’s take a look at how the parents responded to the coach’s actions. In Western societies, placing blame is often the go-to response. Yet, here, the parents acknowledged the imperfection of the situation, and then went on to express their gratitude to Coach Ake for caring for their sons.

This is interesting. Perhaps it’s because Thailand is 95 percent Buddhist. For them, it’s about getting clear about their purpose in life, building an enlightened society together, and attaining liberation from needless suffering rather than becoming attached to outrage, blame and fear. They wanted to get on with their lives, and let Coach Ake begin anew and do the same. As famous radio host Bernard Meltzer once put it, “When you forgive, you in no way change the past, but you sure do change the future.” Compassion and forgiveness can be more invaluable than recrimination and litigation.

It’s the third lesson this survival story reveals that is the real keeper for me. Put simply, hope is real. Looking back, there were doubts at first that there’d be survivors. Then, once they were finally located (by smell, in fact), it was determined that the delicate, dangerous maneuver would involve navigating nearly 2 miles underwater. There was even talk of the rescue possibly taking months. And yet, more and more people came together, saying, “No. We have to turn around what you may call Mission Impossible into Mission Possible. Failure is not an option.”

To what do we attribute this awesome resolve in the face of dicey, adverse odds? The intention here is clear: “Let’s save the kids.” Whether or not the growing members of the rescue team had kids of their own, they recognized these children as their very own. And as the world watched, they became our children, too.

What rallied the Thai people and motivated others to quickly join hands across 15 nations can give all of us hope. I know I personally need that sense of fearless courage, optimistic determination and clear-headed resilience in my life right now. It’s true, too, for many of my friends during these uncertain times.

Our hearts know of a better world; we saw confirmation in the Thai cave of how that world is possible. May we all continue to draw from the healing, transformative watershed of courage, hope, resilience and community which the good news in Thailand has nourished in tens of millions of hearts around the world.