Mountain biking helps Olympian Lea Davison to “see the bigger picture.” Now she helps others do the same. 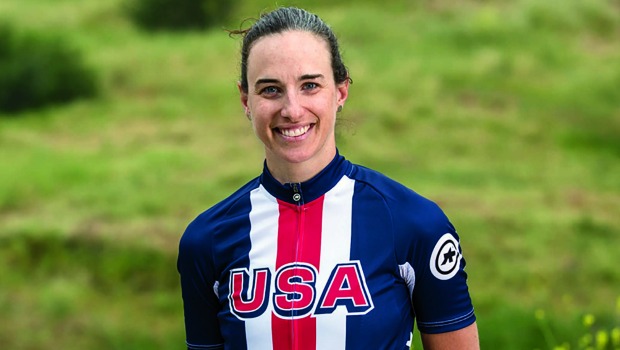 Biking allows her to "see the bigger picture," and help others do the same.

Mountain biker Lea Davison competed at her first Olympic Games in 2012 in London, and she’s on track to race again this summer in Rio. In London, she was just happy to make the team after rebounding from a serious hip injury that benched her for an entire season.

“Just making it to the Olympics was a dream come true. Everyone says that, but it’s true,” says Lea, who’s 33 and from Jericho, Vermont. “To say I’m an Olympian has been my goal since I was a kid.”

She, too, knew that if she was going to perform her best at the Olympics, she had to forget about all the hype—the pressure from the crowds, the media, her sponsors. “I was nervous for months beforehand, but you have to get that out of the way. On the morning of the race, I was able to be calm,” Lea says. “You try to treat it like any other race. Sure, there’s a lot of hoopla surrounding it—it’s the Olympics. But I just kept reminding myself, ‘This is just another bike race. You know how to do this.’”

She ended up 11th place in women’s mountain biking and says walking into the closing ceremony alongside her American teammates was her proudest moment. “To hear the roar of the crowd was very powerful,” she says. “Seeing your country behind you and all of that support, it was just quite a moment.”

When Lea was a college student at a liberal arts school in Vermont, she took a positive psychology course. In the class, Lea, who grew up ski racing and started mountain biking competitively in high school, read Authentic Happiness by Martin Seligman, Ph.D. She learned about the three dimensions of happiness, as described in the book. First is the simplest form, which Martin calls the pleasant life—Lea describes this as “eating a Girl Scout cookie and being happy for the next 10 minutes.” 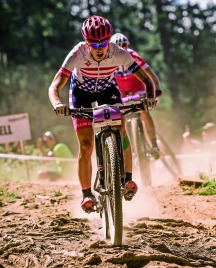 The second state, called the good life, is about finding your own strengths and using them to improve your life. Lea says she found this easily when she discovered mountain biking. “You have to be present and in the moment when you’re navigating these trails and courses,” she says.

The third and deepest level of happiness Martin calls the meaningful life, which is when we use our powers for the greater good. That, Lea says, took longer for her to find.

Lea graduated college in 2005 and dedicated herself to a career as a professional mountain biker. In 2008, she and her sister, Sabra, decided to start a nonprofit organization called Little Bellas, which aimed to get young girls in their home state of Vermont into mountain biking. The program took off and they now have chapters nationwide to introduce girls ages 7 to 13 to the sport they love. Little Bellas is what helped Lea find her most meaningful life.

“It’s worthy to go after your goals and see how far you can push yourself, but it’s essentially a very selfish pursuit. It’s all about how fast I can turn the pedals over,” she says. “But helping these young girls become themselves and figure out what they can do, that is what brings me true happiness.”

“As an athlete matures, he or she begins to recognize a world that is bigger than just them,” says JasonJason Richardson, a former World Champion and Pan-Am Games gold medalist in BMX racing, who is now a psychologist working with Olympic athletes. “Even the best do not find as much meaning in just performing well in the arena when they become older and wiser. This is not to say that they are no longer competitive. It is to say that winning doesn’t have the same meaning as it did when they were a rookie.”

Cycling, Lea says, has provided her with many life lessons. “I could get wrapped up in all the details and be very narrow focused,” she says. “But sometimes, you have to just step back and look up from the trail and realize how beautiful this place is. You have to take in the bigger picture because there’s always something to be grateful for.” So we can’t all be Olympians, but we can watch them from afar, cheer for them as they take on the hurdles of their competition. We can take a piece of their experience and let it inspire us to live more meaningful lives.

“We all should tune into the Olympics because those are the people who are taking risks and putting it all on the line,” says executive coach and author Caroline Miller. “When you see people giving it their best, you become awed and inspired. And when you’re awed, people tend to look up, figuratively and emotionally. It causes people to want to be better than they are already.”