Fencer Miles Chamley-Watson reaches for the gold at the Olympic Games in Rio. 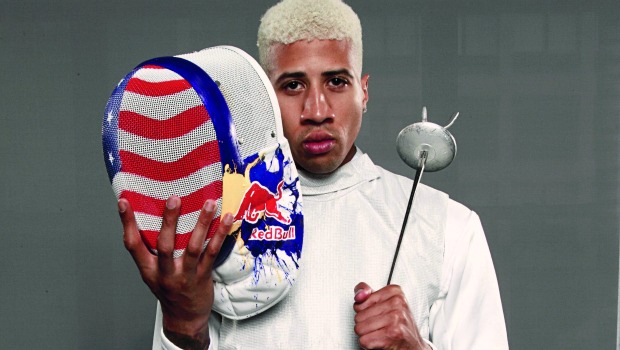 The fencing champion has a chance to realize his dreams at this summer's games.

Miles Chamley-Watson, 26, just missed the podium at the London Olympic Games. A fencer, he was ranked No. 2 in the world entering the 2012 Olympics, and he was aiming for gold. But he was defeated in the second round and wound up in fourth place in men’s foil.

“I wanted to come away with hardware, so I wasn’t happy,” says Miles, who was born in London but moved to New York when he was 9 and will be a top fencing competitor this summer in Rio. “It was incredibly frustrating. It was my first time at the Olympics and everything felt magnetized and blown out of proportion.”

In a study that looked at the emotional reactions of Olympic medalists at the 1992 Games in Barcelona, Spain, researchers found that silver medalists were reportedly less happy than those who took bronze. Why? “The silver medalists feel like they are so close to winning, but just missed the mark, whereas the bronze medalists are just happy to get a medal,” says Caroline Miller, an expert on positive psychology and the author of seven books on the subject, including her upcoming book, Getting Grit. “There are people who win and they feel empty afterward. They think it will bring them happiness but the Olympics don’t buy you happiness.”

Just as Miles has found through the extensive mental training he’s done to prepare for this summer’s Olympics, the more stressed he is in the midst of a competition, the less likely he will perform at his best. Whereas the more joyful and relaxed, the better he’ll do. In other words, happiness begets success, not the other way around.

“It used to be thought people became happy by having success. But pinning your happiness on winning a gold medal isn’t how it works,” Caroline says. “People succeed by being happy first. Their bodies are relaxed and in a different state of consciousness. They’ve done all the preparation they need to do and they’re utterly confident and relaxed about it. They’re not constricted or anxious.” 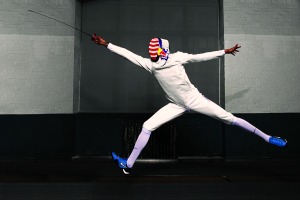 We can’t all be Olympic fencers, but we can learn from Miles. “Do whatever makes you happy. Don’t let anyone tell you no. Above all, take risks,” Miles says. “I’ve taken so many risks in my life and that’s what’s gotten me where I’m at now.” Caroline says it’s those risks that bring such a high level of joy. “The reason why the highs are so high and the lows are so low is that these athletes take risks and because of the intensity of passion that they bring to their lives and their sport,” she says. “They’ve invested so much and they’ve given up so much in order to pursue their craft.”

Sure, getting fourth place may not feel great, but Miles, who, in 2013, the first American fencer to win an individual World Championship title, also knows what victory feels like. “There’s no feeling like when you work really hard for something and the training actually pays off,” he says. “You win a competition and there’s no other feeling like it in the world.”

A 2009 report in the Journal of Happiness Studies found that those who attempt to master a new skill may be frustrated or stressed throughout the process, but they have greater happiness long term.

“Very few of us can be Olympians. But we can all learn from what these men and women bring to their sport—they live with joy, they live with a sense of satisfaction,” Caroline says. “At the end of every day, we scan our days for what we did that was hard. We’re only proud of ourselves when we did something out of our comfort zone. We all need to have something we’re passionate about, something that lights us up, something that makes us work for it.”