Olympic kayaker Michal Smolen stays calm even when the pressure is on. 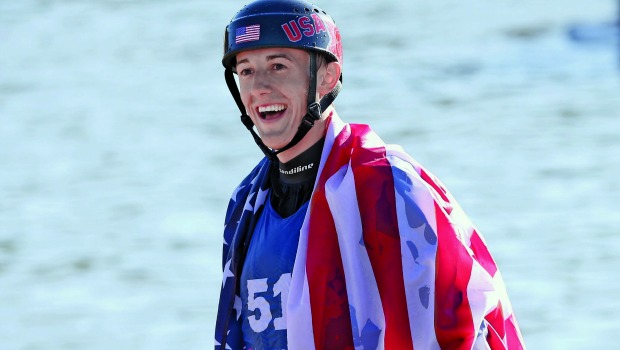 Passion and single-minded focus are fuel for this elite athlete.

Elite-level athletes have mastered the art of staying calm in high-stress moments, they’ve learned to find joy even in harshly competitive situations, and they realize they perform their best when they’re at ease and relaxed. Those are skills any of us can develop.

Take Michal Smolen, the professional slalom kayaker making his first Olympic appearance in Rio. When Michal slides into the seat of his kayak, the rest of the world disappears. It’s just him and the water, flowing down-river in an endless stream. Maybe his comfort in his boat comes from the fact that he’s been kayaking competitively since he was a kid. Or maybe he’s just figured out how to quiet his mind, even when the pressure is on. 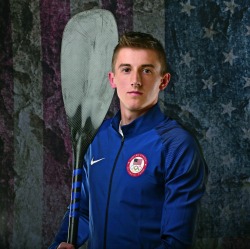 “It’s a matter of not letting any expectations affect me,” Michal says. “I have to leave all that behind and just tell myself that I’m doing what makes me happy. If I’m flexible, relaxed and focused, I can cancel out anything that gets in my way.”

Psychologists call this “flow state,” and it’s proven to boost performance and mental focus. “In a flow state, you are completely involved in the activity and time starts flying,” says Wendy Suzuki, Ph.D., professor of neural science and psychology at New York University and author of Healthy Brain, Happy Life. “In this state, worry and ego are not engaged, and you can focus totally on the task at hand. Part of being relaxed, at ease, and having fun is finding a way to enter the flow state where focus can be fully directed at the activity.”

Michal, 22, lives in Charlotte, North Carolina, where the U.S. National Whitewater Center is located. He would have been a top contender on the U.S. Men’s Kayak Team at the 2012 Olympic Games in London if a citizenship snag hadn’t gotten in the way. Michal moved to America with his family from Poland when he was 10 years old. His father, Rafal Smolen, was a member of the Polish National Kayak Team and is now a coach for the U.S. Olympic team.

A life of competition

Michal got into kayaking early but soon discovered he had a fear of water, and at 13, he was diagnosed with epilepsy. He put kayaking on hold, sorted out the proper medication to minimize his seizures, and he joined the swim team, hoping to conquer his water anxiety. It worked. “I wanted to be like Michael Phelps—I was very ambitious as a kid,” he says. “I started doing really well at swimming, but it wasn’t bringing me the same enjoyment as kayaking. So I switched back.”

By high school, Michal was one of America’s best young slalom kayak racers, getting fourth place at the Junior World Championships at age 16. By 2012, he placed second at the Olympic trials, but he learned too late that his U.S. citizenship papers would take longer than he thought. He was devastated to sit out his first opportunity to compete at the Olympics.

Finally, in February 2013, Michal officially became an American citizen. Since then, he’s been focused on this summer’s Olympic Games. In 2014, he won the Under 23 World Championships, the biggest victory of his career. Last year he became the U.S. National Champion and won a bronze medal at the World Championships and gold at the Pan-American Games, setting him up to be a favorite in Rio.

Going for the joy

He has no idea what to expect from his first Olympic appearance, but he says he plans on keeping a level head and not letting anything get to him. “When I’m racing that most important race of my life, I want to make sure I’m not shaking and sweating and doing all these crazy things before I’m about to go. I want to tell myself, ‘I did everything I could. I’m ready for this. I’m going to enjoy it,’” he says. “That’s what I do this for: I do it for myself and for the joy of it.”

Michal has figured out something that scientists and doctors have been studying for years. Studies have shown that athletes with positive psychological states—those who are relaxed, at ease, having fun—physically perform better in competitive settings than those with negative emotions.

“If an athlete’s overall sense of wellbeing and happiness is within a suitable range, they tend to perform better based on the fact that their perceived level of stress is reduced and their subjective belief is ‘I’m doing well,’” says Jason Richardson, a former World Champion and Pan-Am Games gold medalist in BMX racing, who is now a psychologist working with Olympic athletes. “Those beliefs become the driving force, as they precede the feelings and actions that ultimately bring results.”

You don’t have to be an Olympian to gain something from this lesson: Enjoy yourself and you’ll do better at whatever it is you set out to do.