Wish upon a star? Forget it. If you really want to make your dreams come true, you need to harness hope. Psychologist Shane Lopez shows us how. 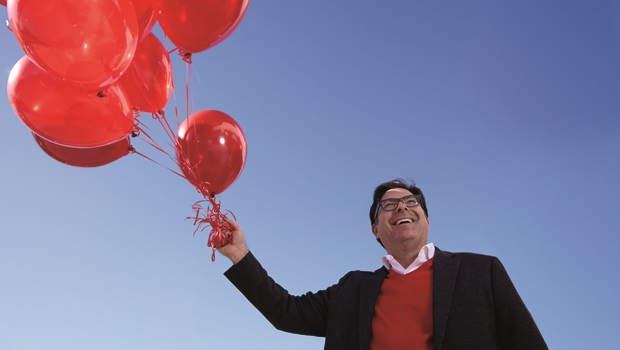 If you really want to make your dreams come true, you need to harness hope.

Shane Lopez was a few years into his research on hope when he found himself feeling pretty close to hopeless. He had awoken on July 4, 2003, with a piercing headache, and though he kept his plans to go with his wife to a neighbor’s holiday barbecue, the pain kept getting worse throughout the afternoon and over the next few days. “There was this incredible pressure, not just in one part of my head but all over,” he says. Shane, then 33, thought he might be experiencing his first-ever migraine, but when he developed a fever of 104 degrees, he realized, he says, “something’s not right.” A battery of medical tests pointed to a surprising diagnosis: West Nile encephalitis.

There were about a dozen cases of West Nile virus in Shane’s resident state of Kansas that year, including three deaths. Shane escaped the worst fate, but he would spend the next year incapacitated. “I went from being this very eager, ambitious, high-achieving person,” he says, “to someone who couldn’t walk halfway around the block.” He experienced extreme arthritic pain in every joint, slept 18 hours a day and was forced to take a leave from the University of Kansas, where he was a professor of psychology and counseling.

Shane spent the few hours he was awake in his favorite chair in the attic. At 5 o’clock his wife, Alli, would get home from work and sit in the chair next to his. “She would talk to me about what our life would be like together when I felt better,” he says. “It wasn’t about the horror of my pain and fatigue that day, it was about starting a family together, my doing work I was passionate about and our taking a trip to Europe. She’d paint these vivid images of the two of us riding scooters through the Italian countryside. There were times when I felt that I wasn’t going to get past being sick and infirm. But Alli pulled me forward into a different future.” Her hope was contagious and curative.

It would be a full year before Shane went back to work and several more years before all his symptoms abated, but the images that Alli had summoned did come to pass.

In 2004, they took a trip to Italy, France and Switzerland and, yes, rode scooters. A few weeks later they discovered Alli was pregnant. Today, living in Lawrence, Kan., they are the adoring parents of an 8-year-old son, Parrish, and Shane is one of the world’s leading researchers on the psychology of hope. A senior scientist with Gallup, he was the chief architect of the Gallup Student Poll, an annual online survey that measures hope, engagement and wellbeing among middle-school and high-school students. He does hope-raising programs not only with kids but also with bankers and mayors, corporate executives and health care professionals. He wrote a book, Making Hope Happen: Create the Future You Want for Yourself and Others, to spread his message to a broader audience: Hope matters. Hope is a choice. Hope can be learned. Hope can be shared with others.

Shane is happy to call himself a hope monger, and he wants you to be one, too.

How Hope Became a Vocation

Shane didn’t start out as a hope researcher. Intelligence—something that can be measured with the hard-edged precision of IQ points—had been his area of investigation as a postdoctoral clinician with the Eisenhower VA Medical Center in Leavenworth, Kan. But as he worked with patients who were spinning out of control because of health, relationship or financial problems, something became very clear to him: Intelligence was overrated. “When I met people who were very smart but overwhelmed by life, I realized that intelligence has very little to do with coping,” he says. “It has very little to do with happiness. It has very little to do with general success in life.” What mattered more, he observed, was what Emily Dickinson called “the thing with feathers that perches in the soul”—and what his mentor Rick Snyder, one of the pioneers in the field of positive psychology, described as a life-sustaining force that is rooted in our relationship with the future: hope. “How we think about the future—how we hope—determines how well we live our lives,” Shane says.

Why Optimism and Wishes Aren’t Enough

To understand what Shane means when he talks about hope, it’s helpful to begin with what he doesn’t mean. 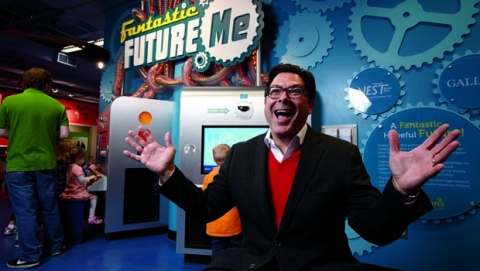 Hope is not wishing, something Shane dismisses as “mental fast food.” Daydreaming about the perfect job, the perfect mate, the perfect home can create a feel-good buzz, but it’s fleeting. “Hopes are sustainable,” he says. “Wishes are not.”

Swap warm and fuzzy wishes for robust, action-driven hope and you reap powerful payoffs. Hopeful students earn a grade higher in final exams than their less hopeful peers with an equal IQ; workers who are hopeful are more productive—by about an hour a day—than not-as-hopeful colleagues, whether they’re closing loans at a mortgage company in the U.S., fixing engines at a Swiss factory or working an assembly line in China. Hope is protective, first responders who are high in hope suffer less psychological distress, and it’s strongly linked to a sense of meaning in life. Does hope lead to happiness? Not by itself, Shane says. But it’s hard to be happy without it.

The Hope Shortage Among our Children

We are suffering from a hope deficit in the U.S., Shane says, and nowhere is this more evident than among our children. For the last five years the annual Gallup Student Poll has been measuring hope among fifth through 12th graders. The online survey consistently shows that America’s youth is strongly optimistic: almost all—95 percent—believe they will have a better life than their parents. But there’s a considerable hope gap. Just over half— 54 percent—of the 600,000 students who participated in the 2013 survey are hopeful about the future, agreeing that they will graduate from high school, that they energetically pursue their goals and that they can think of many ways to deal with problems. The rest are what Shane calls “low hope” kids. “It’s shocking to me,” he says, “that half of the children out there don’t have excitement about the future, don’t have the sense that they can really be the agents of their own lives.”

Shane and his colleagues don’t yet understand everything that’s behind this hope lag. But, he says, “What we know for sure is that students have more will than they have ways. What I mean by that is they’re incredibly confident that they can make the future better than their present, but they don’t have any good sense of how to make that happen. So, what they really need is for us to teach them how to turn an interest into a career into a real job or how to take some fuzzy warm feelings about someone and start a friendship. What kids lack the most are the ways to make good things happen in their lives.” 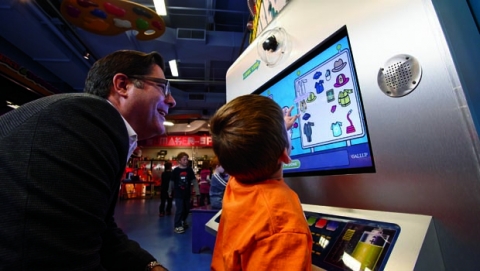 Spending a day with Shane, as Live Happy recently did in Omaha, it’s easy to see his extraordinary capacity to connect his audience. Whether he’s sitting with a preschooler on his lap at the Children’s Museum in Omaha and guiding him through the interactive Fantastic Future Me exhibit, joking with a fifth-grader about his plans to run faster than Usain Bolt, or exhorting a group of high-school teachers to be their most hopeful selves so they can be effective purveyors of hope for their students, Shane’s message resonates. 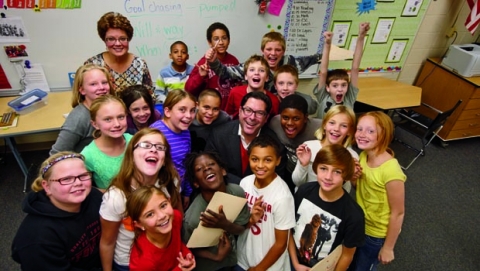 In teacher Pam Mitchell’s fifth-grade classroom at Paddock Road Elementary, Shane is coaching nearly two dozen 10- and 11-year-olds in how to go from “goal setting to goal chasing.” Alternately striding among the rows of desks and crouching down to be at eyeball level with the kids, he asks how they feel when they’re working on a goal they’re excited about. “Pumped,” one girl suggests. “Pumped! I loooove that word,” Shane says.

“You kids are great at this! When you’re working on a goal that you’re really pumped about, this is where hope happens.” 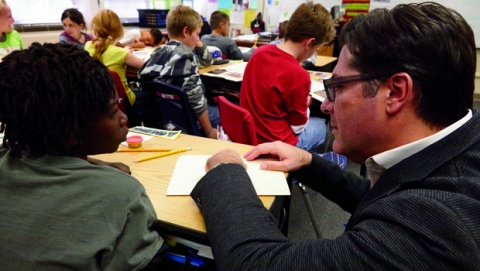 Shane asks the kids to open their “hope folders”—one part of the hope-building project—pick the goal they’re most excited about, then write down two ways to make it happen. “Where there are ways there’s a will,” he says. In a message he also shares with corporate execs, he explains that having more than one action step can help you keep moving when you hit an obstacle. Next, Shane instructs the students to make a where/when plan—“this is an appointment with yourself”—on taking the first step to pursuing their goal. “We find exciting goals that our body and our heart tells us we’ve got to work on, and we come up with incredible ways to get to these goals,” he says. “And you know what happens? The day passes and then the next day passes and we run out of time to work on these goals. It happens to adults, too. Time slips away.”

Kylee is picked to come to the head of the classroom and share her hope project. Her goal: help cure cancer. Her ways: join a team that’s already fighting cancer; make a list of ways to raise money. Her where/when: 11:30 on July 9, the day she turns 11, on the couch in her living room. Watching from the back of the classroom, Omaha’s Westside Community Schools district superintendent Blane McCann laughs, “Cure cancer? These kids just might do it!”

Shane says that over time he has learned to be hopeful. And it continues, he says, to be hard work. “Being a hopeful guy is something I work on every day,” he says. He tries to surround himself with high-hope people—easy to do, he says, when Alli and Parrish are the two most hopeful people he’s ever met—and every day he looks toward the future and figures out what it is he’s most excited about. He has regular sessions with a “strengths coach” who helps him make sure his goals are aligned with his strengths. Shane doesn’t take hope for granted. What his childhood and his experience with West Nile taught him, he says, “was you have to have something to be excited about in the future; otherwise every day will be a chore.”

The experience of hopefulness is unmistakable, he says. “When I’m at the height of hope I’m literally sitting on the edge of my seat,” he says. “My words are sharper and clearer and there’s this lightness, this uplifting feeling throughout my body. If you haven’t had that feeling in a good while, you have to re-learn it. And that’s the role of the most hopeful people in our lives. They can teach us hope.”

Shelley Levitt is a contributing editor to SUCCESS magazine. Her articles on health, beauty and well-being have appeared in Women's Health, Fitness, WebMD and Weight Watchers magazines.