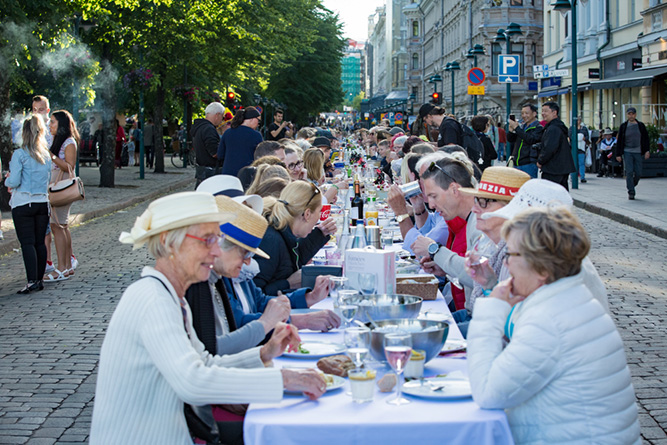 Helsinki, FINLAND—JUNE 12, 2018: A Finnish dinner under the sky with people eating and drinking together for the Day of City Celebration in center of Helsinki. Photo by Aleksandra Suzi.

Winning once could be a fluke and twice a coincidence. But three times? Now that is a trend. For the first time since the World Happiness Report began tracking the happiest countries in the world, Finland has ranked number one in subjective well-being for three consecutive years.

Released annually on March 20 coinciding with the International Day of Happiness, the World Happiness Report 2020—published by the Sustainable Development Solutions Network with data from the Gallup World Poll—ranks 156 countries around the world on their citizens’ perception of happiness. According to the report, Finland held a significant lead over second-place Denmark, continuing its global dominance on happiness. While the Nordic countries traditionally rout the rest of the world on this list, two new countries have crept in Austria and Luxembourg. For the United States, it was a push, staying at 18 out of the top 20.

In a released statement, Canadian economist and World Happiness Report editor John Helliwell said: “A happy social environment, whether urban or rural, is one where people feel a sense of belonging, where they trust and enjoy each other and their shared institutions. There is also more resilience, because shared trust reduces the burden of hardships, and thereby lessens the inequality of well-being.”

New to the report in 2020 is the ranking of happiest cities with Helsinki, the capital of Finland, ranking first. According to the report, the world’s happiest cities are almost always in the happiest countries. A few of the factors that are taken into account to gauge the happiness of citizens are how a country or city handles social support networks and social trust, access to nature and green spaces, safe environments, trust and if strong relationships can be maintained.

Jan Emmanuel De Neve, a Belgian economist and Director of the Wellbeing Research Centre at the University of Oxford, explains that the happiness of urban dwellers is often higher than the general population of lower economically developed countries compared to higher-income countries where the opposite is true.

“But this urban happiness advantage evaporates and sometimes turns negative for cities in high-income countries, suggesting that the search for happiness may well be more fruitful when looking to live in more rural areas,” he says.

The Top 20 happiest countries in the world include: