Endurance runner Dean Karnazes may be the ultimate marathon man. 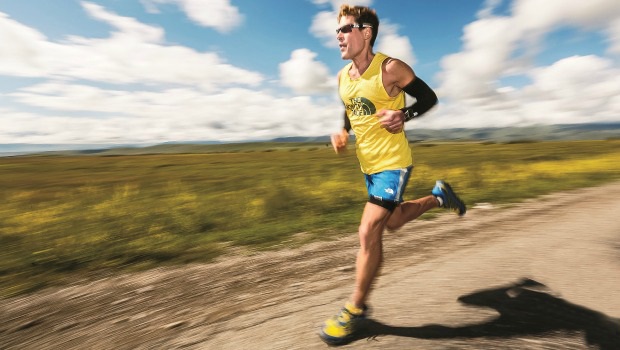 Imagine crossing the finish line as you complete your first marathon. You are maxed out mentally and physically; your legs are like overstretched rubber bands and your lungs are on fire. You feel like crying, but you are not sure if it is from extreme joy or pain; it’s probably both. Then imagine doing it again five times over.

For ultramarathoner and author Dean Karnazes, a 150-mile race is just another day at the office, and he can finish a marathon before your first coffee break.

“There is a saying I have, ‘there is magic in misery,’ ” Dean says. “If you have ever run a marathon, believe it or not, as bad as it was and how bad it hurt, there is magic in it. You feel more alive than at any other point in your life.”

That feeling is what keeps him on the perpetual road to finding achievement and meaning. Dean may be an extreme case, but he is a great example of what endurance, drive and grit can accomplish.

“It gets to the point where your head is somewhere else,” he says. “You are so focused on the task at hand, and it sounds bizarre to think that for 30-plus hours, but you are really thinking about one single thing. And that is accomplishing your goal. It is that intense.”

Dean describes this feeling as “Zen-like” and a unique chance to live in the moment and think about nothing else other than crossing the finish line. This kind of mental focus is often described as “flow,” a state where the mind and body are so in sync that the outer world and even self-consciousness seem to melt away. Researchers claim that this level of engagement is an essential spoke in the happiness wheel.

Taking it to the limit

Most likely, no one reading this will ever have to endure what Dean goes through to find satisfaction and contentment. But many do find pleasure in running great distances such as marathons, half-marathons, 5K races or any seemingly insurmountable task that we set out to conquer.

Dean writes that such feats of strength and personal courage can have profound effects on our well-being, and once we cross the finish line, we are “liberated from the prison of self-doubt and limitations.” Even if we have to nurse our injuries for a week afterward, he says, we have never been freer.

The long journey within 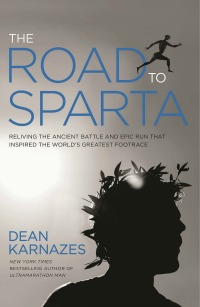 Dean competes in some of the most mentally and physically taxing races on the planet, including the Badwater Ultramarathon across the sweltering Death Valley desert, a frigid marathon to the South Pole and the punishing Spartathlon in Greece, which he chronicles in his latest book, The Road to Sparta.

Set in the rocky terrain of Greece, this annual footrace of 153 miles is the birthplace of the marathon as we know it today and attracts competitors from all around the world. The route retraces the steps of the fabled foot courier Pheidippides who carried important messages back and forth from Athens to Sparta.

His job, without the help of energy gels or high-performance running shoes, was to recruit the Spartans to help fight against the massive and breaching Persian army at the battle of Marathon, a role so important that he may have saved the Greeks from tyranny for centuries to come. No pressure.

For Dean, whose family descends from Greece, this race was the chance to participate in something bigger than himself; it was a chance to channel history and experience what his ancestors did nearly 2,500 years ago.

Of all his herculean feats in life, the Spartathlon race was a much more personal experience. “It was about finding out who I was as a person and understanding where I came from. It’s more self-discovery and a richer understanding of my heritage and my past,” Dean says. “I think that it’s something that everyone at some level seeks to know. ‘Where did I come from? Who were my people?’ ”

His mother’s side of the family is from the carefree island of Ikaria, where life moves slowly and stress is low. His father’s side is a resilient group from the hills of Sparta. The former is where Dean may get his optimistic outlook on life, but the latter is composed of a long line of endurance runners. As a boy, he remembers old folktales of men from Crete running from village to village. He would witness the older people dancing at the local Greek festivals for eight to 10 hours straight and admiring their endurance.

This experience went far beyond what any lineage website could bring. “It was really an immersive journey into my past.”

“Running is such a simple act, but it is profound in its simplicity as well as its complexity,” Dean says. “Let’s face it, running can be mind-numbingly boring.…It can be extremely painful and every runner has a relationship with pain. Everyone else inherently tries to avoid pain and yet we runners embrace it and welcome it.”

Through hot and humid wind coming off the Mediterranean Sea, Dean was met with obstacles day and night as he negotiated ankle-breaking terrain across his homeland with a queasy stomach and blistered feet. Admittedly, it wasn’t Dean’s best performance in a race, but he was given a hero’s welcome full of selfies at every checkpoint. 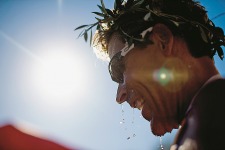 “I would say [the Spartathlon] probably is the most grueling ultramarathon on earth…it gets to 100 degrees, but then there’s the terrain. There are points where you are on all fours scaling up the side of a mountain coming into Sparta.”

But we as humans have the capability to complete extreme tasks, to hit an extra gear. For ages we have been running long distances. As Dean explains in his book with the help of Professor Paul Cartledge, A.G. Leventis Chair of Greek Culture at Cambridge University, legend holds that Pheidippides may have run back and forth for more than 300 miles, delivering messages amid the famous battle between the Greeks and Persians. He finally reached the end of his journey delivering his final message to Athens, “Nike! (Victory!),” before collapsing to his death.

For Dean, “It was a holistic journey, if you will. To think about…the same course I am running on right now, a guy was here 2,500 years ago trying to save democracy. Trying to save all of the things we know today and here was a guy by himself, barefoot with the weight of the world on his shoulders.”

Running to save the world 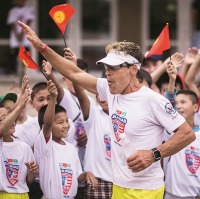 Dean is a big believer in uniting people, especially through running. He recently ran a 525 kilometer race on the Silk Road—the ancient trade route spanning from the Mediterranean to China—as a sports ambassador on behalf of the United States.

His mission was to connect with people along the way in countries such as Kazakhstan, Kyrgyzstan and Uzbekistan who don’t often get the chance to see Westerners. On many of his stops, he was greeted with friendly faces and local runners to keep him company on his 50-mile-a-day journey through the high altitudes of Central Asia.

“There are so many things in this world that divide us, that separate us: the color of your skin, your race, your religion, your socioeconomic level,” Dean explains. “Running is the great democratizer. There is commonality, no matter where you live or what you look like, you put one foot in front of the other just like every other human and that unites people instead of dividing people. I think that is a beautiful thing.”

Listen to the interview with Dean Karnazes on our podcast, Live Happy Now.