Do a Happy Dance

It’s time to get moving; dancing is one of life’s free, simple pleasures. 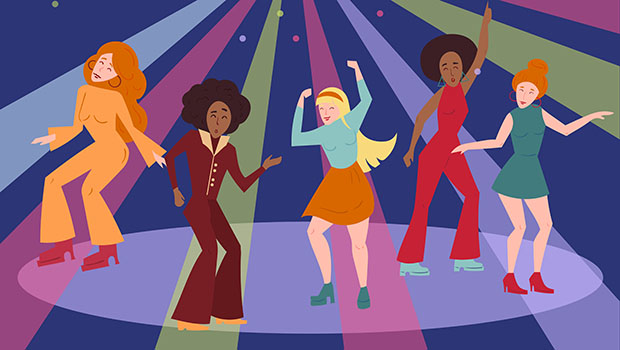 Dancing does more than spread joy; it also helps your health.

Elizabeth Spencer can’t remember a time when she didn’t love to dance. She was so drawn to it that while she was still a child, her parents enrolled her in classes—ballet, jazz, tap; you name it.

“I loved my dancing classes,” says Elizabeth, who lives in Washington, D.C. “It’s one of the earliest things you do as a child. Even before they stand up, babies move to the music. It’s almost an innate thing.”

The propensity for pirouetting that begins with your first hesitant steps can—and should—last a lifetime, believes Elizabeth, who never misses a chance to hit a dance floor, whether it’s at a wedding, a concert or a fundraising event.

“What happens is that we get older and we get self-conscious, so we stop dancing. But it is so much fun. There are some songs where you just need to stop what you’re doing and dance.”

For Elizabeth, cutting a rug is a way to lower stress, celebrate life’s small victories and get a healthy dose of happiness running through her body.

“When a song comes on, I want to expend the energy of the joy the music gives us,” she says. “It is definitely one of life’s free, simple pleasures.”

As it turns out, what Elizabeth is experiencing is more than a simple pleasure, it’s a physical and psychological lift.

Dancing, researchers have discovered, delivers an immediate mood boost and helps increase feelings of relaxation. What’s more, those effects continue even after you’ve left the dance floor. In fact, a study conducted by the University of New England in Australia found that dancing the tango was as effective in staving off depression as mindfulness meditation and was actually more effective than meditation in relieving anxiety.

So why does it make us feel so good?

For starters, it gets us moving. Unless you’re busting a move in your car (or your office chair—we’re not judging), dancing requires you to get up and move your feet. That gets your heart and lungs working, which is a great antidote to today’s desk- and couch-bound lifestyles. And there’s evidence that all movement is not created equal; researchers have found that indulging in a few minutes of boogie fever does more for you than, say, taking a vigorous walk around the block.

In multiple studies from different countries, researchers have compared the effects of different types of dancing to physical activities ranging from running to bicycling to treadmill training and walking. While any sort of physical activity has a positive effect on your mental state and releases brain-pleasing endorphins, dancing amplifies that effect.

That could be in part because of the way our brains are hard-wired to respond positively to music, which results in such positive outcomes as lower blood pressure and strengthened immune systems. While the music is setting the stage for a happier brain, the movement helps release those feel-good hormones to pack a healthy one-two punch.

Not Just in Your Head

If you’re excited to think that all that gyration leads to joy, the news just keeps getting better. That movement is doing more than just making you happy in the moment—it’s also helping you build a better brain.

Psychologist Peter Lovatt, founder of the Dance Psychology Lab at University of Hertfordshire, has studied how dance changes the brain’s neural processing. His experiments have shown progress in using dance to improve thinking skills among patients with Parkinson’s disease, while a study published in the Journal of Alzheimer’s Disease cited dancing as one of the activities that can cut the risk of Alzheimer’s in half.

And, the bottom line is, whether you’re doing it for your mental health or your physical well-being, dancing is something that is fun and doesn’t require an expert skill level to deliver the benefits. Create your own happy dance or follow along in a class; either way, you’ll reap the benefits.