Let Your Workout Lift Your Life

Pushing yourself past your imagined limits when you work out can challenge you mentally and stretch your boundaries physically. 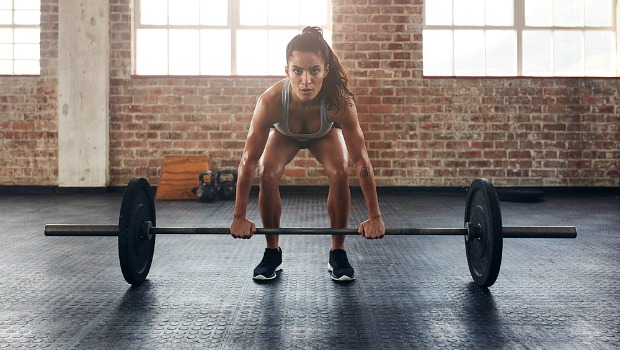 Discover the positive power of pushing yourself.

Staci Ardison of Austin, Texas, believed she’d be happy if she lost weight. She went on a diet and started doing cardio; she lost the weight, but didn’t find the happiness she expected. At a friend’s suggestion, she tried powerlifting, a form of competitive weightlifting. Progressing from deadlifting 135 pounds to 315 pounds and also adding 50 pounds to both her overhead press and bench press in six months did more than lift her spirits.

“You pick up a bar and nothing else really matters because it’s so empowering,” Staci says. “Knowing what my body was capable of made me very happy and excited.” Staci discovered that powerlifting’s progressive nature (each week, more weight is added) and team atmosphere made her more confident about speaking her mind and more at ease meeting new people. 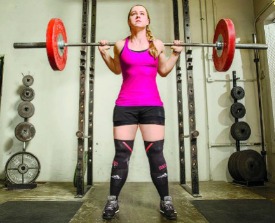 “It takes time, but as you start lifting more [weight] and realizing who you are and what you’re capable of, what other people think doesn’t matter as much anymore,” Staci says. She found herself moving past the crippling shyness she’d experienced since childhood, easily making friends after recent moves. “Before I started [powerlifting], I would have never talked to anyone, anywhere,” she says.

As Staci learned, a departure from your routine can have profound effects on your body, mindset and spirit—and this is especially true when it comes to fitness. If you want to feel happier, more confident and strong-minded, sometimes it’s best to put down the self-help books, postpone the therapy appointment and hit the gym instead. Workouts that push your limits can challenge you mentally and stretch your boundaries.

“It’s going to be a little uncomfortable at times,” explains Ariane Machin, Ph.D., clinical and sports psychologist and co-founder of the Conscious Coaching Collective, an agency focused on programs to help clients embrace their power and find their inner voices. “Your muscles will be burning, you’ll be breathing faster than you would like, [and you’ll be facing] the psychological barrier of, ‘Can I actually do this?’ ”

According to Ariane, you should embrace that unpleasant feeling because it’s a positive sign of change. These levels of discomfort can also be an asset: As your fight-or-flight system becomes engaged, your heart rate goes up, blood circulates, more oxygen is supplied to the brain and you are primed for better performance.

As Staci’s example shows us, toughing it out during exercise can also help you find your footing outside the gym. Studies show that exercise helps with confidence, mood, happiness and stress resilience. Using data from 15 European countries and more than 10,000 respondents, a 2015 study published in the open access journal BMC Public Health determined that more exercise was associated with greater happiness. Another 2015 study from the University of Turku in Finland found that young men and working adults with good physical fitness felt more active, energetic, capable and confident in their daily tasks, and experienced less stress. 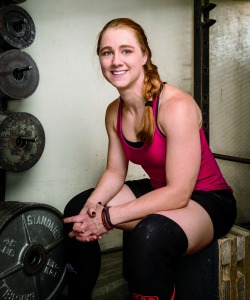 The gradual process Staci used to gain muscle demonstrates exactly how strength should be built. According to Daniel Rockers, Ph.D., a Sacramento-based clinical health psychologist, building strength—whether while working out or in life—requires getting out of your comfort zone. Gradually and progressively pushing yourself out of that zone, he says, can get you used to overcoming stress, instead of being overwhelmed by it.

Practicing a sport or exercise where you’re consistently pushing the envelope makes you more resilient to stressors in other areas of life, as both exercise and dealing with stress both involve periods of work and rest. Happy hormones are also created during exercise, whether it’s moderate or intense. Janet Schrager, Ph.D., says that endorphins produced through movement cause an exercise-induced mood boost, often called runner’s high, will make you feel more positive.

“I always recommend movement and exercise as a critical component for well-being and positivity,” Janet says. Research exploring the connection between exercise and positivity found that taking a brisk 35-minute walk five times a week subdued symptoms of mild depression, and the mood-boosting impact of exercise appears to last longer than taking antidepressants, according to a study referenced in Harvard Health Publications. Working out also improves focus, increases cognition and boosts creative insight, Janet adds.

Two months ago, online pet insurance entrepreneur Nick Braun felt his business and personal life were in a rut. He decided to shake up his solo exercise routine by taking group classes. Plunging himself into an unfamiliar environment with new-to-him exercises that he enjoyed revitalized his personal life.

“[The classes] really reinvigorated me physically and mentally with my business,” Nick says. He started making creative adjustments to his business such as modifying his website design and opening an Instagram account.

Nick’s experience reflects scientific findings: In 2016, research published in Scientific Reports found that one aerobic exercise session significantly enhanced both visual and muscle learning in study subjects. What’s more: This effect can last more than 30 minutes post-exercise, leading researchers to believe that exercise of moderate intensity may improve the brain’s plasticity (the ability of the brain to change).

Another 2014 study in the Journal of Experimental Psychology performed experiments showing that walking boosted performance on a creativity test. Nick definitely found this to be true. He discovered that attending classes—a blend of butt-kicking strength training, cardio and stretching—in a female-dominated environment sparked ideas on how to market to his business’ similarly female-saturated market.

Observing how the female owners marketed their club—from the way they designed their logo to the colors and layout of their studio—helped him understand he had been approaching marketing his business from a purely analytical perspective. He shifted his approach by hiring copywriters and other creative experts to help him achieve his newly inspired creative vision. 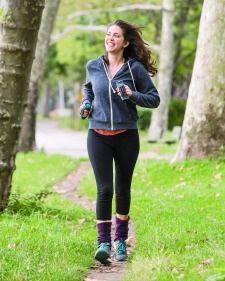 New York health coach Samantha Elkrief also experienced a change in outlook from hitting the gym. Samantha always thought of herself as skinny and frail; she was convinced she would never be considered a strong woman. In fact, she was so afraid she’d fail at building strength that she never even tried. But, after being diagnosed with endometriosis in 2014 and learning that exercise could help counteract the condition, she joined a gym, hired a personal trainer and started strength training.

But Samantha made it onto the box that day, and eventually, she was box jumping up to 20 inches. That exercise was just one of the confidence-building movements Samantha learned while working out. “I used to think that I couldn’t get good at something I wasn’t inherently good at. But the gym flipped that around for me,” she says.

Samantha’s confidence followed her outside of the gym: She took up new hobbies, regardless of whether she thought she’d excel at them, including food photography and painting classes. At work, she fostered new business alliances and began submitting articles to publications.

“Pushing myself at the gym gave me so much more confidence,” she says. “In life, you don’t often get 10 opportunities to push yourself out of your comfort zone in an hour. At the gym, you do. And it retrains your brain.”

Whether you’re building strength and confidence like Staci and Samantha, or making changes in life and business like Nick, it’s best to start small and work your way up. According to Pax Tandon, Ph.D., a Philadelphia-based positive psychology expert, you can take your first small step by changing the way you breathe. Breathing mindfully will help combat the fear and anxiety that may stop you from getting to your workout.

To begin, try this breathing exercise: Count four seconds to inhale, hold for four counts, then exhale for six counts. As you inhale, concentrate on breathing in positives like optimism, calm and positivity; as you hold, clear your mind and breathe out negative emotions like stress and anger.

Practice this cycle for one minute a day to start. Then, increase the minutes you practice as you get more comfortable. Eventually, muscle memory takes over and you will begin to naturally breathe mindfully. This process will bring calming oxygen to your brain and inspire a trend: Your breathing will help you make it to your workouts and your workouts will help you develop your breathing even more, which will help you tackle further ventures outside your comfort zone.

“[Without breathing mindfully] we end up in states of panic or fear. The breath gets very shallow and short, which works against us,” Pax says. Another positive step, Ariane points out, is that changing damaging thought patterns may help you push your limits. One pattern that may need to be countered is comparison syndrome—bringing yourself down by comparing yourself with others.

Ariane advises that you remember everyone’s process and strengths are different. You can oust the comparative mindset with gratitude and self-appreciation by performing daily gratitude lists and viewing your weaknesses as strengths. Instead of thinking “I wish my body were different,” try “I appreciate what my body does for me.”

For Samantha, who sometimes deals with comparison syndrome in yoga class or on Facebook, staying focused on her own accomplishments—and deleting the Facebook app from her phone to minimize her feelings of FOMO (fear of missing out)—helps the 33-year-old entrepreneur sidestep these comparison traps.

But despite the challenges you may encounter along the way, taking yourself out of your comfort zone is certainly worthwhile. “It makes you a different person,” Samantha says.

Carimé Lane is a Vancouver-based freelance writer. Several years ago she found the sport of boxing, which never fails to push her outside her comfort zone.