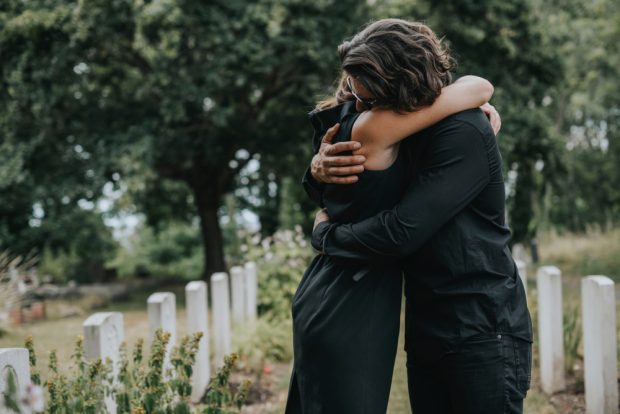 No longer relegated to live a life defined by tragedy, survivors and scientists alike are finding the positive side of grieving.

Becky Aikman took her place on a metal chair. In her 40s, and much younger than most of the others in the group, she already felt out of place. During the session, the older women addressed her with barely disguised resentment. She was haunted by the “bad juju” of the group.

Later, she explained to the facilitator that she felt the group should be following its description: “Moving Forward After Loss.” He responded by asking her not to come back.

Becky decided to form her own group, one that would emphasize new experiences and comradery. What she was looking for was a positive experience, despite her loss. Eventually, she would emerge as a happy, wiser person.

Channeling her time as a journalist, Becky sought out research on grief. She discovered that the “five stages of grief”—denial, anger, bargaining, depression and acceptance—had been discarded as outmoded by most grief researchers and counselors. She also found someone who had made researching how people grieve his life’s work: George Bonanno, Ph.D., a professor at Columbia University Teacher’s College.

The New Science of Grief

George came to grief research unexpectedly after what he calls a “curious” job offer early in his career, to direct a grief study at the University California in San Francisco. It was the beginning of a lifetime of studying bereavement, one in which he found, “almost nothing from the traditional ideas seemed to hold up,” he says.

Although some seemed to get stuck in the intense grieving phase after a death, George found most people were able to move on. “The more common outcome is of being sad by the loss, being unhappy about it, but continuing to do OK in your life,” he says. “It suggests that it’s what we’re wired to do. “And to some extent, it is. We have a biological response to stress that’s extremely effective.”

George found there were factors that helped people naturally evolve through grief. People with a better network of supportive friends and family, potential for financial resources, education and physical health, as well as fewer other stressors, tended to bounce back more easily, although virtually no one got off without significant pain. An additional factor is resiliency, which George believes may be influenced, at least partially, by genetics.

He has written cautiously that he believes as well that people can nurture resilience. “That may be a little naïve and a little dangerous, because we don’t really know a lot about that yet,” he says.

Until we learn more, there are some things people can do to feed resiliency, George says. For one thing, we can work to lessen stress. We can keep social relationships active. And, “laughter is a very good thing, because laughter and amusement are kind of incompatible with being upset.” It may be artificial to watch funny movies—but doing so reminds you to have joyful experiences with other people. Being optimistic and flexible are useful, too, he says.

Not Recovery, but Renewal

Becky assembled five women who had lost their husbands at a relatively early age. “We were all still going through a lot of changes, and we were going through them together,” Becky says. “We understand each other in a deep and profound way. It’s a friendship that’s really deep and lasting because of that.”

By the time Becky began the group, she had remarried—but it’s a mistake to think she didn’t need support at that time. “A lot of people think that if you’ve lost a spouse, when you remarry, that’s it. Problem solved. And it’s not true. That experience will always be a big part of me,” she says.

Specialists in grief counseling agree that people never “recover” from grief. Recovery means returning to life as it was before, and we can never get back a loved one who has died.

“I think we are constantly being renewed by the deaths of the people we say goodbye to,” Bill says. Twenty-one years ago, Bill’s father died, and he continues to think about his dad as each significant event in Bill’s life arrives. “That doesn’t mean I haven’t moved on or moved past his death, and it certainly doesn’t mean that my life is organized around his death,” he says.

What does renewal after a death look like, and when does it occur? There is no one-size-fits-all timetable, counselors say. But, eventually, there comes a time when most people say they are OK, that they are getting through the grief. Bill says they might tell him, “ ‘Probably Christmas is going to be hell on wheels again, even the third year—or maybe even the fifth year, but I’m able to get through it.’ And it’s not just slogging through it and it’s not ‘I’m a damaged person forever.’ Instead, ‘I’m actually a better person in one way or another.’ ”

Similarly, Dave Kurns talks about the “new Dave” who is forming. His wife, Sharon, died on Dec. 23, 2012—“a difficult Christmas for the kids and me, and probably always will be.”

“I don’t think I’ll ever recover,” Dave says. “I don’t know that I’ll ever become whole. But I do think that I will re-form into something new that I hope is different—and maybe even better than before—as a person.”

Sharon was a director of a regional education agency in Des Moines that serves central Iowa schools. She was also an avid reader, and her book club presented Dave with a memorial fund to use to advance the love of reading. The idea to set up a virtual book club, “A Year of Reading Sharon,” originated with teacher Sarah Brown Wessling and her book club. After interviewing Dave and his children, then examining the books Sharon had recommended for her book club, Sarah suggested a year’s worth of reading: 13 books that spoke to Sharon, ending with the last book she was reading, Isaac’s Storm.

The book club includes a Facebook page liked by more than 450 people, a Twitter feed and a discussion group on GoodReads.com. People are encouraged to read the book that month and then give it away, to promote the love of reading.

Participants post photos showing the book being left for others all over the world.  It’s a way to celebrate Sharon’s love of reading and her sharing spirit, but it’s more than that. “Even though we’re sad, we can still feel some of the joy that she brought to us,” Dave says.

No Right Way to Reconcile With Grief

“A Year of Reading Sharon” has helped Dave mourn, which is an absolutely necessary step, says Alan Wolfelt, Ph.D., who directs the Center for Loss and Life Transition in Fort Collins, Colo.  “There’s no one and only way to mourn,” Alan says. In talks throughout the world, he champions “companioning,” or traveling with someone through the darkness of the journey toward reconciliation, or a realization of the reality of death. Alan cautions against shaming a person for not getting grief right—when there is no right way to grieve.

Where, years ago, we experienced death often and shared our grief more, now we are uncomfortable and unfamiliar with it—people can get into their 40s before death touches them closely, and then they tend to be impatient with the grieving process. The next logical, but incorrect, step is to attempt to manage grief instead of surrender to it. “In the last 40 to 50 years, we’ve shifted from surrendering to the mystery of grief to now wanting to manage the science of grief,” Alan says. “Knowledge can be an obstacle to the path to wisdom.”

Spiritual or philosophical beliefs can be obstacles, too, and sometimes religious communities buy into the same assumptions that society as a whole makes. And religious organizations that believe that if you have enough faith, “this won’t hurt very much,” or that God punishes people who do bad things, also undermine a grieving person, Bill says.

If a faith community offers the necessary social support, it can help tremendously. But often, death causes people to question their faith. “It’s very hard to square a good God with a dead child,” says Bill, who spent the first 10 years of his career as a congregational pastor. So people had better have a theology that is big enough to encompass that, he says—“And I do, but that’s a 53-year-old theology now, and so I can make sense of that for myself that bad things happen in the world in which we live, even though there is a good God.”

Alan’s center is nondenominational; he sees people who are helped by their faith and people who feel there is no God. But when faith teaches that if you are strong enough, you can bypass the need to mourn, people can feel ashamed. And that shame can cause you to become stuck in your grief, Alan points out.

On the other hand, Becky’s group found happiness by choosing a way to grieve together. As members shared new experiences, they bonded. And in 2013, Becky published Saturday Night Widows, sharing the group’s experiences and how, together, they came back from tragedy.

“When we get together, we have a blast,” Becky says. “We do things that are fun. We laugh ourselves silly all the time.”

That’s not to say that the group members don’t endure pangs of grief, waves of overriding feelings of loss that Alan calls “grief bursts.” Becky says, “I absolutely agree with people who say you need time to recover….Everyone is different, everybody needs a different amount of time, but I agree that there’s a low period that people go through—and nobody gets to skip that part.

“I’m just saying that everybody does have the ability to work their way through this over time, and to find joy again.”

The women are, Becky says, moving on—and focusing on the future. Their movement happened not in spite of the grief they felt, but because of it, Alan says. “There are times in life we need to be sad,” he says. “The more we befriend it, the more we ultimately can be happy.”