Music and movement help one teen recover from a debilitating brain injury. 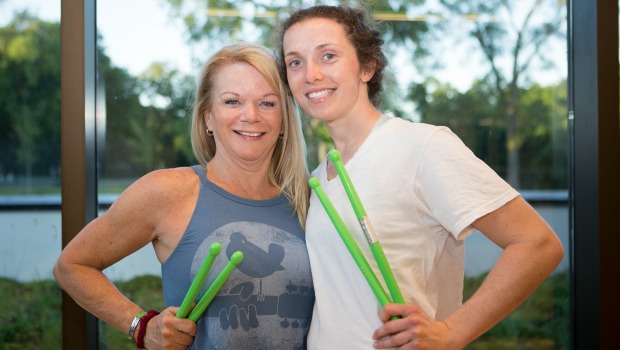 Five years ago, when a car rammed into the vehicle that Sarah Knobloch was riding in, it dramatically changed—nearly ended—the then-15-year-old’s life.

“She was in a coma, and the doctors told us to start thinking about organ donation,” recalls her mother, Caroline Knobloch. “We weren’t ready for that.”

Doctors weren’t sure how long she would survive or, if she did, how well she would recover. The accident left her with severe brain and spinal cord injuries, and the coma lasted 20 days.

In addition to Sarah’s unwavering positive attitude, her mother credits her recovery to two things: music and movement.

“Early on, the doctors said we could bring music into her hospital room,” Caroline says. “One of my friends is a music teacher who downloaded a bunch of classical music for us to play in her room. We always had music playing.”

As Sarah remained hospitalized and slowly began to recover, music and exercise were mainstays of her daily program.

“I like rap and hip-hop, so that’s what works best for me,” says Sarah, who, despite spending seven months in the Atlanta hospital, completed high school on time and is now studying to be an occupational therapy assistant. “The music helps me remember good times, and for someone with memory loss, that’s been really important.”

Researchers have found that music is effective for both physical and emotional healing because it engages all three areas of the brain: reptilian (body functions), limbic (memories and emotions) and the neocortex (language and consciousness). They’ve also learned that outcomes are better when hospitals use “patient preferred” music—even rap and metal can promote healing if it resonates with the patient.

“I like listening to all styles of music,” Sarah says, “but listening to what I used to listen to has helped me the most.”

Healing with a beat

Earlier this year, Sarah learned about Pound, a program that uses specially weighted drumsticks to create a choreographed cardio workout. She implemented the workout into her regimen and says it has helped her retrain her brain for better balance and body movements.

For Pound co-founder Kirsten Potenza, that’s pretty much the point. Although many seek it out for its fat-blasting, high-energy routines, Kirsten says a lot of science went into creating the drum-centric workout. Sure, it’s stress relieving to be able to beat bright green drumsticks on a yoga mat while listening to upbeat music, but the idea behind Pound goes beyond that.

“There are a lot of studies showing the brain-boosting effects of drumming,” she says. “It improves focus, boosts the immune system, lowers chronic pain and improves decision-making skills. And, when you do it in a group, it’s even more powerful.”

Pound has been called the new SoulCycle by many, and Kirsten says the thing the two workouts have in common is the way the music speaks to the heart and soul while moving and improving the body.