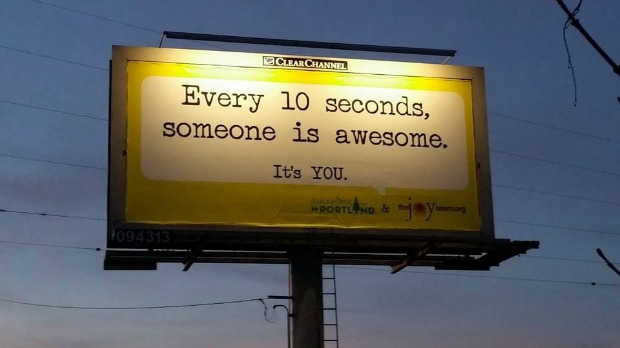 Photo courtesy of The Joy Team.

The Joy Team spreads happiness with a national billboard campaign

You are rushing to work. Your To-Do list is weighing on your mind, and you feel a little stressed. As you drive along, you glance up at a bright yellow billboard and read: Every 10 seconds, someone is awesome. It’s you. Then you smile.

Making you smile is the goal of The Joy Team as they set out to boost the nation’s happiness level by posting positive messages on billboards as part of International Day of Happiness, March 20. Now that is one major Happy Act.

One woman who has made a difference

Based in Vancouver, Washington, The Joy Team is a nonprofit organization founded in 2010 by Michele Larsen and her daughter Taryn. “My billboard goal for this year is to have a continuous presence of positive message billboards in at least three cities,” says Michele.

One positive message can make a huge difference in someone’s day. The Joy Team has a list of more than 30 positive messages that can be shared on billboards across the United States. Some of those messages include:

One kind word can change the world.

Life loves you. Just the way you are.

Happiness is contagious, start an epidemic.

With a mission to build community by spreading joy, optimism and inspiration, The Joy Team’s initiatives grow every year. The team leads a national Chalk the Walks day on the third Tuesday in August, when they spread similar positive messages with bright chalk. They have also started the Junior Joy Team, a group of kids who share joy with those around them.

In the four weeks a billboard is up, it will reach hundreds of thousands of people. With enough billboards, millions of people can be inspired, Michele says. “Ultimately, I’d love to have one up year round in every city in the United States because these billboards make a difference in the lives of people who see them. The billboards infuse people with a boost of inspiration and optimism.” For more information on Joy Team activities, visit Joyteam.org.

What #HappyActs will you be doing for the International Day of Happiness?