One Scout Troop in Cincinnati is running a “Smile Campaign” during the month of June to boost happiness. 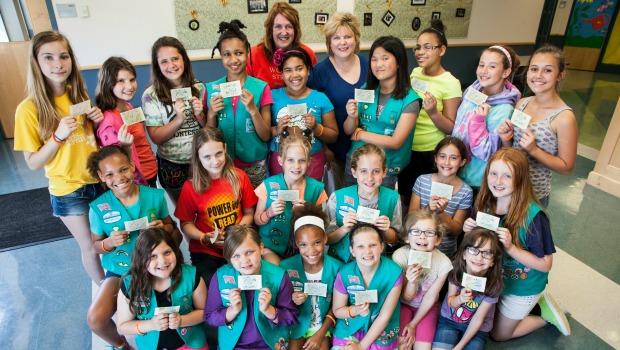 When it was time for the Girl Scouts of Troop 41645 in Cincinnati to choose their Bronze Award project, they came up with a simple but ambitious goal: To make the world a better place. And, after brainstorming ideas, they decided the best way to do that was simply to make people happier. 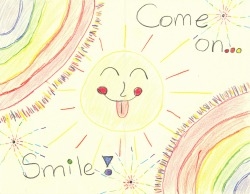 “Once we decided to do that, we started talking about reasons why people weren’t happy,” says Carrie Wagner, co-leader for the Troop. “We talked about war, depression, loneliness—we talked about all the reasons people were sad, and why it was important for them to smile more and how we could make them do that.”

The girls came up with the idea of a “smile campaign,” called “Smile, the World Needs It,” which launches June 1 and will run for 30 days. Each troop member created a card designed to make someone smile, then the troop voted on their four favorite designs. Those cards were then printed up and the girls are given 30 cards at a time to hand out to people they see. They can hand them to strangers at the mall, to people who buy cookies or just to anyone who looks like they need a reason to smile.

The Bronze Award is the highest honor that a Girl Scout can achieve, and it requires that the entire team develop an idea, create initiatives and then put that plan in motion. The girls in the Troop range from age 9 to 13.

The goal of the project, as outlined by the Troop, is to “educate friends, neighbors, colleagues, acquaintances and make new friends promoting 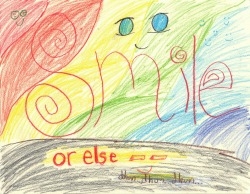 happiness and smiling to all.” They also are researching reasons why people are not happy and will use their discoveries to “work to change the way people think about happiness.”

Karen Strasser, co-leader, says they have already printed 700 cards, but hope to hand out at least 5,000 cards during the month-long campaign. Each girl is asked to personalize the cards she hands out by writing her own message about smiling or happiness on the back.

As part of the project, each girl must also submit four random acts of kindness that she participated in and must submit four reasons to “smile and be happy.” The troop leaders will post those acts and reasons on the campaign’s Facebook page during the month of June.

Troop members will encourage everyone they meet to follow them on Facebook, and to “look in the mirror and work on being a more positive person.” 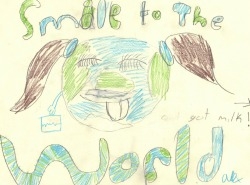 Kylie, who designed one of the cards being used, says the movement could help curb sadness in the community. “There are so many people who are rude or not happy,” she says. “It makes the people who are happy kind of sad, so we want to make everybody happy.”

And Troop member London says that she has noticed recently that so many people seem unhappy. She hopes this campaign will make a difference.

“I’ve noticed from watching the news that there are a lot of bad things happening,” she says, “and this is one way to change that.”

Although the campaign has not yet started, the girls say they already feel happier just by working on the project.