One couple’s dream to help those in need turns into a citywide movement. 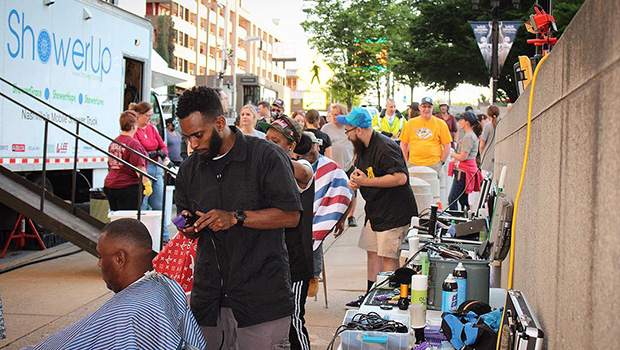 When Rhonda and Paul Schmitz moved to Nashville in 2013, they wanted to continue doing the kind of volunteer work they’d been doing with the homeless in Kansas. The more work they did with the Nashville homeless, the more they heard of an unmet need.

“The one thing we heard over and over was that people needed a place to shower,” Rhonda says. “We looked around, thinking there had to be something available, and there wasn’t anything for them.”

Nashville’s growth boom and current role as the “it” city of the South has been hard on the underemployed; many of the city’s homeless have jobs but can’t afford skyrocketing rents.

“Imagine having to get up every day to go to work, and the first thing on your mind is trying to find someplace just to clean up,” Rhonda says.

She says they couldn’t imagine having to do that every day, but they could imagine a solution.

“Paul said, ‘We need to do a shower truck’ and that’s where it started. It all came together from there.”

They called their new initiative Shower Up, and as soon as they received their nonprofit status in November of 2016, they began fundraising efforts. They signed up for The Big Payback, a citywide drive to raise money for nonprofits, and received what Rhonda calls “a tremendous response.” By December, they had a box truck, but needed to convert it into a mobile shower unit—something they had no idea how to do.

“I asked around, and the one thing women really wanted was to be able to shower in private,” Rhonda says. “Usually if it’s a portable shower, it’s not very private. And women, especially women who are living on the streets, need those moments to themselves.”

Rhonda and Paul took their ideas (and their truck) to the Lee Company, which provides heating, air conditioning, electrical and other services.

“They were incredible, they knew exactly what we were doing and every time I said what we wanted, they just said ‘we can do that.’ It was amazing,” she recalls. But she and Paul were in for an even bigger surprise when the company said they would design and complete it for only the cost of materials.

Before Rhonda and Paul left the meeting, the workers had one more surprise for them.

And that’s exactly what they ended up doing.

Giving Back a Bit of Humanity

By April 2017, the truck was ready. Thanks to Facebook and word of mouth, the Schmitz garage was filled with donated shampoo, soaps and supplies. (To this day, they have not yet had to buy any shampoo.)

“People just got behind it in such a big way. We started offering showers in May, and after the first week, I got a message from a hairstylist named Carolyn who wanted to know if she could come down and cut hair.”

That launched yet another movement that today is known as the Nashville Street Barbers. This collective of professional stylists donates services every Monday night to provide beard trims, haircuts and other salon services at the Shower Up locations.

“We’ve had an incredible response, both from the homeless and from volunteers who want to come help,” Rhonda says. “Maybe they’re cutting hair, maybe they’re passing out towels, it just gives people a stepping stone to be able to do something for others.”

Kayce Tutor, one of the hairstylists and founding members of Nashville Street Barbers, says the experience has been life changing.

“I think in the beginning, it was a calling I think we all felt separately, to do something more with the talent we’ve been given,” she says. “After my first Monday with them, I knew it would be a weekly event for me. Something as simple as a shower and a fresh haircut can make a huge difference. It gives people a bit of their humanity back.”

On a Mission, On the Move

The mobile shower unit visits a downtown location every Monday night, and is at another location frequented by the homeless every Sunday afternoon. It attracts dozens of homeless men, women and children who appreciate taking a hot shower in a private, welcoming setting. Shower Up recently held a fundraising campaign that allowed them to put a second mobile shower unit on the streets.

“We have people who have been on a construction site all day and just want a shower. Or sometimes they have a job interview,” Rhonda says. “It’s amazing how something as simple as a shower can move you forward in life.”

In addition to seeing the joy it brings to the people they serve, Rhonda says it has been rewarding to see how volunteers have gotten involved—and how this has changed their perception of the homeless.

“It’s a blessing and an honor to get to know each other on this level,” she says. “When you invite someone into your world, you get to know them and it changes your perspective.

“To see what this does for people, it’s just so worth it.”