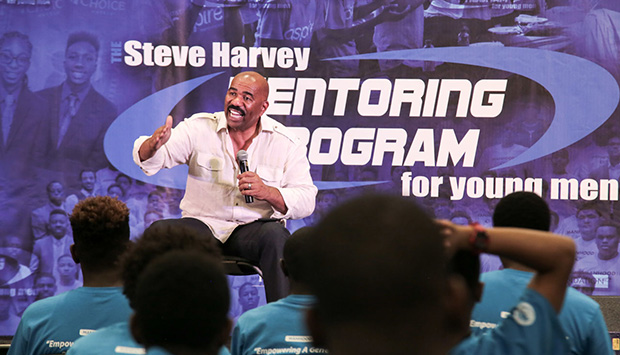 In honor of Father’s Day, Live Happy’s June Happy Act of the month is to support families. One of the organizations we admire is the Steve and Marjorie Harvey Foundation (harveyfoundation.com) that provides mentorship and training to young people and single mothers. Actor, producer and TV host Steve Harvey shares how his organization’s life-changing programming is key to strengthening families everywhere.

Live Happy: What inspired you to create the Steve and Marjorie Harvey Foundation and how long has it been in operation?

Steve Harvey: The inspiration was my father. My father passed when I was 43 years old. I was thinking about him and what all he meant to me. If I didn’t have him, I never could’ve gotten here. So, I thought of all the young boys and how difficult it must be without their fathers, and I thought, “Hey, I want to do something about that.” My foundation started about 18 years ago in 2000.

How does community mentoring, and the support of positive role models, transform young people?

Well, a young boy without a male role model is like an explorer without a map. A young boy is going to be some type of man; it’s the model that you put in front of him that he will most likely duplicate. So, if you put a bad man in front of him he’ll duplicate that. If you put a good man in front of him he’ll duplicate that, so that’s how it works. It’s so important because manhood is like a minefield, you gotta have somebody that’s gone through it to help guide you through the levels of manhood because being a man is very difficult. It’s too hard to figure out on your own.

Who gets the most out of these mentoring relationships?

It’s life-changing for the mentees and the mentors. A lot of mentors get a lot out of it. Man, they see a lot of themselves in some of these young boys. A lot of my mentors grew up without fathers, and they want to make sure they provide mentorship for young boys who don’t have it. The fact that a young boy now has a mentor, somebody he can call, text, email, ask a question with a male viewpoint—it’s immeasurable. I get feedback from boys after the camp when I see them graduate from college, when I see them join the military, when I see them with kids now, they come back and say, “Mr. Harvey you changed my life.” They come back as junior counselors. I had one kid that was a gangbanger, just a tough kid, we worked with him and worked with him. He graduated from North Carolina State, and he’s an engineer now. So many stories are like that, but you can’t measure the presence of a man in a boy’s life—it’s immeasurable.

Tell us more about your camps, including the one you’re hosting this month in Atlanta. How can people learn about upcoming camps or volunteer opportunities?

Well you have to go to the website (harveyfoundation.com), but in this camp we cover two things. We cover the principles of manhood and dream building. Those are two critical components. If I can get young men to dream, dream outside their present environment, dream outside of these neighborhoods that they’re in and see themselves somewhere else, it gives them something to shoot for. It’s the dream—your dream is actually more important than your education because if you have a big enough dream, your dream will spur you to get an education.

Teaching a kid that it’s OK to dream, that it’s OK to want something spectacular is paramount. The other most important thing is the principles of manhood. Real men go to church, real men honor God, real men respect the law, real men respect women, real men take care of their children, real men are productive citizens, real men go to work every day. We gotta get that drummed into their heads, because too many times videos and social media are guiding our young men the wrong way to what manhood really is.

What have been some of the most encouraging results?

On a more personal side, what makes you happy?

For more information or to donate or volunteer, go to harveyfoundation.com.