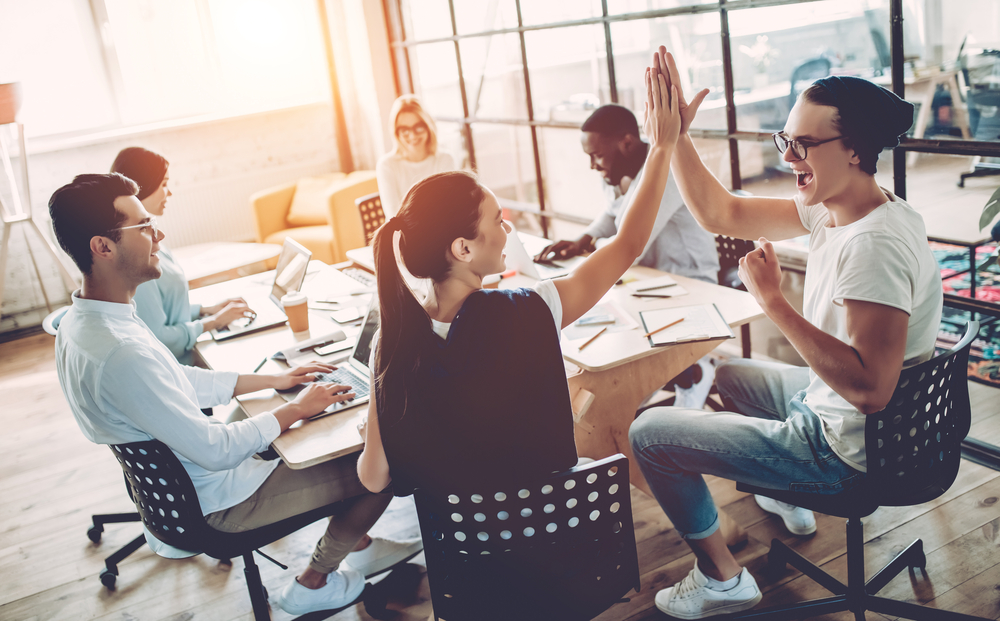 In Denmark, happiness in the workplace is so valued that they even have a name for it: arbejdsglæde. Roughly translating into “work joy” or “work happiness,” it’s a word that seems foreign to U.S. workers in more ways than one.

During the course of our lives, we spend roughly 90,000 hours working, so it makes sense that we’d want to enjoy that part of our lives. While previous generations may have focused their attention on paying the bills and working hard to build a good life for their families, today’s workers expect a greater work and life balance.

In fact, Gallup’s 2017 State of the American Workplace report found that 53 percent of workers say that having a position with greater work/life balance and increased personal well-being is “very important.” And they increasingly expect employers to play a role in that.

The 2017 Staples Annual Workplace Study discovered that 80 percent of workers believe employers have a responsibility to keep employees both mentally and physically well. Given the connection between happiness, good health and productivity, bosses would do well to listen.

“People who are happy at work have better health, are happier in life and enjoy greater career success and lifetime incomes,” says Alexander Kjerulf, CEO of the Danish company Woohoo inc.

It’s good for the company, too. Economists from the University of Warwick found that happier people are 12 to 20 percent more productive and use their time more effectively.

“Companies like Google have invested more in employee support and employee satisfaction has risen as a result,” says Andrew Oswald, professor of economics and behavioral science at the University of Warwick and one of the authors of the study. “For Google, [productivity] rose 37 percent. Making workers happy really pays off.”

But what, exactly, makes for a happy workplace? It’s more than Google’s free food and arcade games that make employees want to work harder and do better; it’s most likely the autonomy, the ability to learn on the job and the variety of challenges that contribute to happiness and greater productivity. All of those elements were found to be major contributing factors to work satisfaction in the Gallup report.

“Autonomy is a key human motivator, and that includes autonomy at work,” says Scott Crabtree, chief happiness officer and founder of Happy Brain Science, a consulting company that helps organizations boost productivity and happiness. “Nobody enjoys being micromanaged, so why do it to others?”

Employees who fare best are those who are given clear goals or expectations, limited feedback (and only when necessary) and the freedom to move forward on their own. That kind of approach leads to an engaged workforce—and engaged workers are happy ones.

Making a Play for Workplace Happiness

Engaging workers is easier said than done. While it’s not a new problem for workers or for employers, it is becoming more important. One of the new drivers of employee engagement is gamification, which applies game mechanics to nongame settings—such as the workplace.

This allows employers to develop rewards, encourage employees and improve performance in a more accessible, enjoyable way. As he studied more about happiness in the workplace, Scott—who has a background in video game design—was surprised to learn that what makes people happy and engaged in video games are the same elements that engage us at work.

“What makes games so compelling, according to science, is that you find core human intrinsic motivators in them; these are psychological needs that we all have,” he says. “Specifically, those needs are autonomy, relatedness and mastery, and the best video games satisfy our needs for that.

Playing With a Full Deck

Scott merged the research on workplace happiness with positive psychology principles into a game called Choose Happiness @ Work. Using two decks of cards, players work through a set of problems based on real-world work scenarios. One player draws a problem, and the other players recommend one of the solutions they’ve drawn from the other deck.

“It gets everyone talking about how these different solutions will work. Every solution has real science behind it,” Scott says. Those solutions apply principles of positive psychology to resolve the scenario.

“I use this a lot in workshops and presentations, and there’s a lot of laughter,” he says. “There’s not enough laughter in the workplace. So even though it’s a ‘serious’ game, it’s a lot of fun.”

Even in its levity, however, the game is providing ideas and guidelines for solving workplace problems, improving communication and creating greater engagement. The solutions presented are designed to make players think differently and respond to situations using a positive, engaged approach.

“When you talk to people about gamification at work, most people immediately go to the surface stuff: We’ll give people points and badges and prizes. All of that is great and it works, but it works better if you understand why it’s working and what it’s all about,” Scott says.

“In work and in games, it’s all about progress and mastery.”

While workplaces may have been reluctant to introduce initiatives for employee happiness in the past, today that mindset is changing.

“I understand that we’re at work to get things done, but fun is not the opposite of productivity. Science shows us it can be a great complement to productivity,” Scott says.

“If you take 5 percent of your time to boost happiness at work, and you get a 20 percent productivity boost out of that investment, then I would say that’s a fantastic return on investment.”