A Bounty of Happiness in Laguna Beach 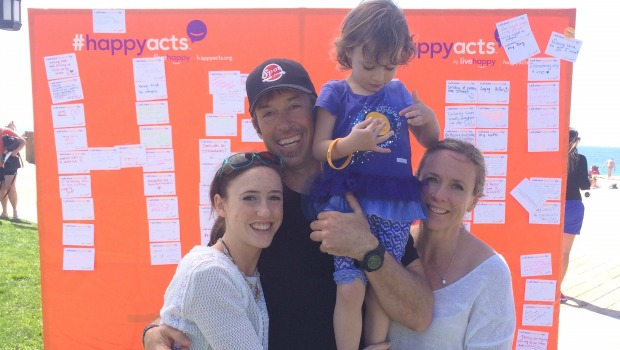 The skies were crystal blue, as was the surf, and bubbles the size of lily pads floated over the sand, launched from a nearby bath and body shop.

Yes, there were lots of reasons to be joyful in Laguna Beach on the International Day of Happiness, and scores of people stopped by the bright orange Happiness Wall that was parked on the boardwalk to share their Happy Acts and the reasons for their smiles.

A day at the beach

Daniela, a grandmother from Michigan, said it was her 6- and 8-year-old grandkids that made her the happiest. “My children make me happy, too,” she hastened to add, “but there’s nothing like playing with your grandchildren and watching them grow.”

Eight-year-old Amelie, heading down to the beach with her dad, said that Ellie Booboo, her Shih Tzu-Chihuahua mix, made her happy every day. “She gives me little bites,” Amelie said of her dog, “and runs around the yard. I love to chase her.”

Keelan took a break from her beach volleyball game to strike a pose in front of the Happiness Wall. “I’m happy playing the ukulele,” an instrument she took up a couple of years ago, she said.

Beachgoers lined up to scribble down their #HappyActs with bright markers.

Anna, who was here from Finland visiting her daughter, said she regularly volunteered at daycare centers and often babysat for free. “Lots of parents don’t have the money for a night out and to pay a babysitter,” Anna said. “I’m always glad to help a hand.”

Teresa, from nearby Irvine, California, is stealthy about practicing her happy acts. “When I’m going through a fast-food drive-up, I like to pay for the car behind me,” she says.

A woman with a big straw hat and the nickname Rainbow shares the gift of compassion and knowledge. Rainbow has a son with autism and she reaches out to parents of children who have recently been diagnosed. “We’ll go out for lunch or go for a walk on the beach and just share stories,” she says.

Filling up the wall

A dozen teens down from Northern California for a Girl Scout trip posed in front of the wall, throwing their arms around each other and giggling. They each had a happy act to share. Erin had given a granola bar to a homeless guy that morning, while Katie talked about visiting a hospital back home and playing piano to cheer up the patients. Claire said she was smiling at everybody she passed on the street, and Moira reminded us all that kindness begins at home. “I remember to express my love to my family,” she says. “I always let my parents know how much I appreciate them.”

By mid-afternoon, it was hard to find a spot on the Happiness Wall. “I am grateful for my life and my dog Kody,” read one post alongside “Every day is a miracle” and “I’m holding doors open for strangers.” Donna, who was visiting Laguna from Iowa, had written, “I will be positive and share the joy of being with a happy family.” It’s easy to understand that joy: she was on vacation with her son and two granddaughters.

Later that day, Donna was back at the wall. She had left an expensive camera behind on the picnic table and Deborah, who was volunteering at the wall, had found her number inside the camera case and called her. In the hour Donna had been gone, she had fully taken on the #HappyActs challenge, stopping to chat with a lonely looking guy with a Dachsund who had been to the wall earlier, and buying lunch for a woman and her daughter, who seemed down and out.

“I wish I had a way to reward you,” Donna said to Deborah. She was quickly assured that she had already done so. A good deed is, Deborah told her, its own reward.