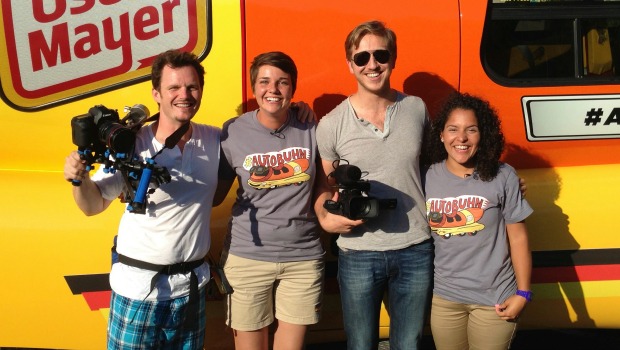 We hear a lot about finding happiness, but it’s not every day that you hear about an actual pursuit. Meet Adam Shell and Nicholas Kraft, two filmmakers who are traveling coast to coast to find the happiest people. (Along the way, they are also blogging for our website.)

The idea for their latest documentary, Pursuing Happiness, stemmed from Adam’s previous film, Finding Kraftland. He followed Hollywood film music agent Richard Kraft and his son, Nicholas, on a worldwide quest to get as much joy and excitement out of life as possible. Overwhelmingly positive feedback from film festival screenings of Finding Kraftland inspired their next venture.

The happiest person in town

“I made a film that’s actually inspiring people to find happiness. Doing things and having the attitude of being happy were always something of high importance to me,” Adam says. “I wanted to see if I could actually spread more happiness and inspire people to think about their own happiness.”

In Pursuing Happiness, Adam and Nicholas talk to psychologists, researchers, theologians and, more important, everyday people, to find out as much as they can about happiness. There has been no shortage of people to interview. Somebody knows someone who is the happiest person they know. From time to time they find themselves in a town where they don’t know a soul. Then they start talking to strangers.

“It’s not about the happiest place in America. The real focus is to find a wide variety from different parts of the country,” Nicholas says. “Part of it is to capture those differences and part of it is to show what unites us.”

The secret to happiness

The most frequently asked question when people discover the scope of their project is, “What is the secret?” Since happiness means different things to different people, there isn’t a single answer. And while their journey is far from over, they are starting to see a trend: Happier people usually come from stronger communities. “It always comes down to community and connecting with people, and that’s where we have definitely found the happiest people in the tightest communities,” Adam says.

“We are pack animals. And as a pack, we are strong; as individuals we are weak,” Adam explains. “The idea of sharing is the utmost idea in the history of humanity, right? Because when you share, that strengthens the community, and when you strengthen the community, your chances of survival improve.”

The most encouraging aspect to this project is that the secret to happiness seems to be no secret at all. There is no unattainable grail. Everything about being happy has already been said. Which is not to say that there isn’t a lot to understand,” Nicholas points out. “It is kind of like music. There are only 12 notes and people are still composing music with those 12 notes. I think there are only a limited number of things that really contribute to happiness, and those are things that we already know.”