Self-compassion plays a crucial role in our body image—and happiness. 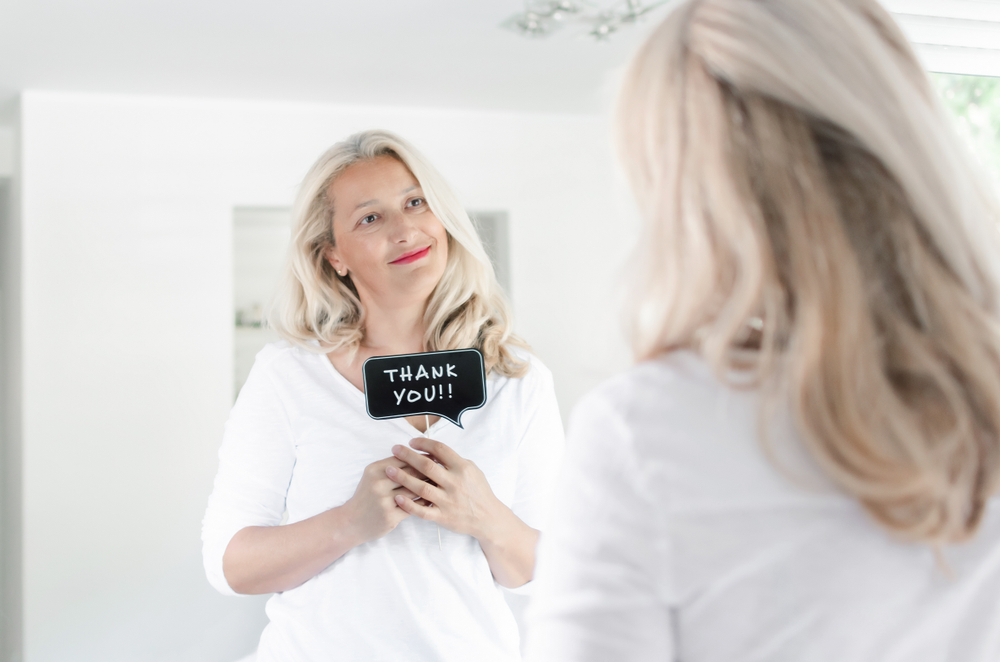 Photo by Focus and Blur/Shutterstock

Self-compassion plays a crucial role in our body image—and happiness.

Could repeating words of acceptance and kindness change the way we see ourselves? According to the research, it may.

While self-compassion has been identified as being a crucial component in creating and sustaining personal happiness, research shows that “self-compassion meditations,” or guided affirmations that encourage us to not only accept our imperfections, but to embrace and appreciate them, also play a major role in the way women perceive their bodies—and how we care for ourselves.

Kristin Neff, Ph.D., author of Self-Compassion: The Proven Power of Being Kind to Yourself, completed a study showing that women who listened to self-compassion meditations for three continuous weeks improved both their body image and their sense of self-worth. What’s more, those feelings remained when the women were tested three months after the study’s conclusion.

“Women tend to be more critical of themselves,” says Kristin, an associate professor of human development and culture at the University of Texas at Austin. “But they also have a greater capacity for compassion. When they listen to self-compassion meditations, we found they learned to silence their self-critic and became happier overall with their body image and sense of self.”

Women—and men—with improved body images have greater levels of self-confidence and happiness and less social anxiety about their appearance. “It changes your basic relationship with yourself,” Kristin says. “The biggest relationship we have in our life is the [relationship] with that voice in our head.”

Unfortunately, she adds, many of us have an exceptionally harsh inner critic relentlessly judging every flaw and misstep, regardless of how small or unavoidable it may be. And since it’s an internal conversation, no one steps in to silence that inner bully. Self-compassion can create the buffer we need to silence the critic and give ourselves a break.

“When you become more conscious and choose to treat yourself better,” she says, “you change that conversation.”

Many of the principles of self-compassion are rooted in Buddhist principles, but self-compassion is also now widely embraced by Western psychologists. According to Kristin, self-compassion essentially means we become as nurturing and compassionate toward our own flaws and shortcomings as we are to our friends and loved ones. Studies have associated it with better performance in the classroom and on the job, as well as improved family relationships and self-confidence in social situations. Simply being good to ourselves makes us feel more deserving, and that launches a cycle of becoming more committed to self-care.

While she wasn’t the first to study self-compassion, Kristin is certainly seen as a pioneering researcher in the movement. Today, the demand to learn more about self-compassion is so great that she has created workshops on the subject, and the movement has given birth to numerous books, blogs and even college courses.

Kristin believes the exploration of self-compassion has become popular because it counters the self-criticism that bars many of us from achieving our goals and discovering our true personal happiness.

“Some of our inner voices are quite cruel,” she says. “We say things to ourselves that we would never say to others, and [what we say to ourselves] makes a huge difference in our ability to be happy. It helps us feel safe, and that allows us to feel happier, less stressed and more creative.”

Barbara Markway, Ph.D., was so inspired by Kristin’s writings on self-compassion that she launched The Self-Compassion Project in 2012. Similar to Gretchen Rubin’s The Happiness Project, in which Gretchen spent one year exploring different studies and theories about how to be happy, Barbara’s one-year plan was to create an online forum for connecting and discovering more about self-compassion. Although she is a psychologist, Barbara says this was a personal project, rather than a professional endeavor.

“If there is one thing that I need to work on, it’s being kinder to myself,” she says. “I realized that I’m not good at nurturing myself, and I think women connect with it because we’re all too hard on ourselves.”

She was surprised to learn how quickly self-compassion can be integrated into daily thinking, even when self-criticism is deeply ingrained.

“The surprising thing was to learn that self-compassion is not that hard,” Barbara says. “It’s just a case of needing to learn to do it for ourselves. You don’t have to spend years in therapy—you just have to learn to be gentler and less hard on yourself. And once you’ve learned that, even when you get down on yourself, you won’t be as hard on yourself for as long.”

Kristin agrees: Learning to be compassionate to ourselves isn’t difficult; it simply requires becoming aware of our own self-talk and self-defeating behaviors. “Write a letter to yourself from the perspective of an imaginary friend,” she says. “What would this friend say to you from the perspective of unlimited compassion?” Write with understanding and acceptance, and then read it again a few moments later and feel the compassion. She also suggests keeping a journal in which you review the day’s events, jotting down anything you felt bad about or judged yourself for. Afterward, add kind words of comfort in a gentle, reassuring tone and encourage yourself to do better next time.

Barbara points to the fact that many studies say learning self-compassion can make us less depressed and anxious, and says she saw herself becoming less worrisome and less of a perfectionist as she explored the concept of self-compassion. Kristin says that’s a common transformation—and a lasting one.

“In the studies that we’ve done, all of the gains lasted at least a year,” Kristin says. “The great thing is, we all know how to be compassionate to others. We know how to be kind, how to be supportive to others. With self-compassion, you just have to be conscious and choose to treat yourself better.”
(Visited 106 times, 1 visits today)
Popular Articles