When it comes to summer fun and deliciousness, nothing beats the classic American sundae—with hot fudge dripping from the sides and a bright red cherry on top! 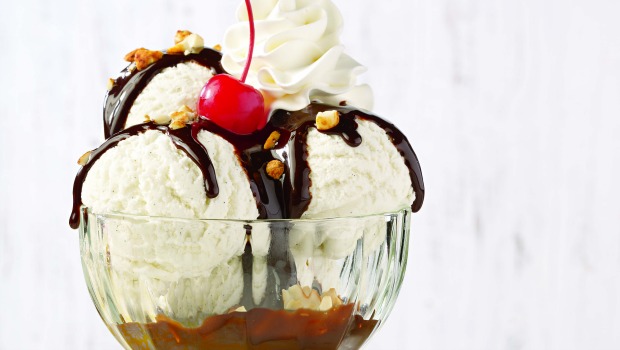 The most American of desserts provides a thrill to the senses.

Fill a bowl with several scoops of vanilla ice cream, let steaming hot fudge run down the sides, and you have America’s favorite guilty pleasure, with whipped cream and a cherry on top. When it comes to summer fun and decadence, you can’t surpass the classic old-fashioned sundae. The contrast of hot and cold wakes up your taste buds and alerts them that something fantastic is taking place.

The sundae likely originated in the Midwest in the early 20th century at soda fountain hangouts popular with teenagers. The West Coast also stakes a claim—at least to the hot fudge. Both C.C. Brown’s in Hollywood and Ghirardelli in San Francisco were early adopters.

Try a sundae variation with different toppings such as caramel sauce, marshmallow creme, fruit syrup (if you must) and a sprinkling of nuts. Delicious adaptations abound, such as the brownie sundae, the turtle and the banana split. Grab a sweetheart and two spoons and devour one this summer.