The best holiday pies don’t come from a supermarket or fancy bakery–they often come from heirloom recipes from our own mothers, aunts and grandmas. 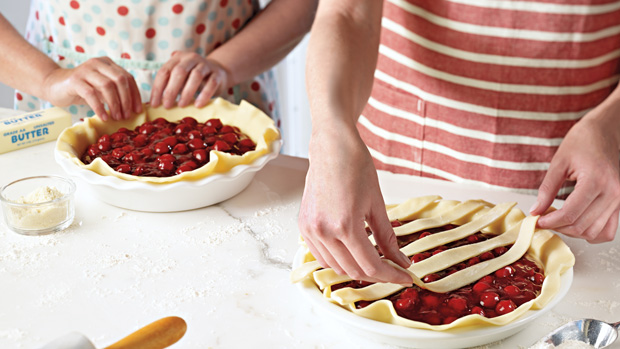 Growing up with two grandmothers who were both fine bakers, certain pies were fixtures on our holiday table. Over the years, I’ve tried different pie recipes with varying degrees of success, but since starting my own family, I’ve come to appreciate those hand-me-down recipes and realize the value of cultivating family food traditions.

My paternal grandmother, who was the daughter of German immigrants, grew up on a farm. They had a few sour cherry trees, and during the fruit’s short summer season, she and her mother would put up jars of sour cherries to use throughout the autumn and winter. My other grandmother, Nana, had a more urban sensibility but was also an enthusiastic baker and a devotee of the celebrity chefs of the 1960s and ’70s, such as Julia Child and James Beard.

Whichever house we were visiting, holiday meal prep was a family affair. I have so many memories of staying up late to help make the cranberry sauce, turn the turkey in its brine or get those pies done while the oven was still free. We would be covered with flour and exhausted but happy by the end of the night, and the whole house would smell of toasty pie crust. The next day, everyone would marvel at our creations.

My grandmothers are no longer with us, but baking is still a family affair at the holidays. We still get covered with flour and have a great time. I know that somewhere, Grandma and Nana are enjoying little glasses of sherry and nodding their approval. 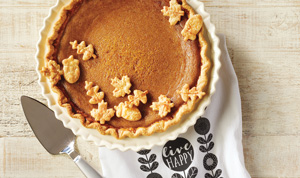 I’ve added a little surprise to Nana’s go-to recipe, creamy and custardy, which we think came from James Beard in the 1960s: a hidden layer of candied ginger, for a delicious punch of flavor. If this sounds like too much for you, sprinkle candied ginger on top instead.

For the Pumpkin Filling

To make the dough, in a large bowl, combine the flour and salt. Add the butter, tossing the cubes in the flour to coat. Using a pastry cutter or two knives, cut and toss the butter into the flour until the lumps of butter are the size of large peas. Don’t overwork the dough. Make a well in the center and add the water a few tablespoons at a time, mixing and pressing with cool fingertips until the dough just comes together. Divide the dough into two disks, wrap with plastic wrap and chill for at least an hour before using.

Let the dough soften slightly at room temperature before rolling each disk out into a 12-inch round. Use one to line a 9-inch pie pan, folding the edge underneath itself and crimping, and place the dough-lined pan in the refrigerator to chill for another hour. Place the second dough round (for cutting out decorations) on a baking sheet to chill.

Meanwhile, make the filling. In a large bowl, combine the puréed pumpkin with the sugar, eggs, cream, spices and brandy, and stir well. Let sit at room temperature while you prebake the pie shell. Heat the oven to 400 F. Line the pie shell with parchment paper and fill with pie weights, letting the weights come up the sides of the pie if possible. Place on a baking sheet and prebake for 10 minutes.

Remove from the oven, remove the paper and weights, and reduce the oven temperature to 375 F. Let the pre-baked pie shell cool while you use the second dough round to cut out leaf shapes with a cookie cutter. Scatter the candied ginger over the baked pie bottom and pour in the pumpkin filling.

Use a pastry brush to dampen the undersides of the dough leaves, then gently press around the rim of the pie crust to make a decorative border. Place in the oven and bake for 40 minutes, or until the custard is just set, keeping in mind that it will continue to set after you remove it from the oven. Serve slightly warm or at room temperature.

Cook’s Note: Keep an eye on the pie crust as it bakes, and if the rim is browning too quickly, create a foil collar to shield the pie rim but keep the custard exposed to the heat. 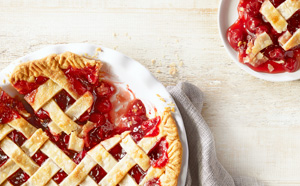 Sour cherries are easier to find in jars than fresh, so they are a perfect way to add bright color and flavor to the autumn table. I sprinkle a layer of almond meal over the crust before filling it, to keep the bottom crust from becoming soggy. A very thinly rolled-out layer of almond paste also works.

To make the dough, in a large bowl, combine the flour and salt. Add the butter, tossing the cubes in the flour to coat. Using a pastry cutter or two knives, cut and toss the butter into the flour until the lumps of butter are the size of large peas. Don’t overwork the dough. Make a well in the center and add the water a few tablespoons at a time, mixing and pressing with cool fingertips just until the dough comes together.

Divide the dough into two disks, wrap with plastic wrap, and chill for at least an hour before using. Let the dough soften slightly at room temperature before rolling each disk out into a 12-inch round. Use one to line a 9-inch pie pan, trimming the dough overhang to 1 inch and placing the dough-lined pan in the refrigerator to chill for another hour. Place the second round of dough (for cutting out the lattice) on a baking sheet to chill.

To make the filling, drain the cherries, reserving the liquid from the jar, and measure out ¹/3 cup of this liquid. In a large bowl, whisk the cherry liquid together with the cornstarch to make a slurry. Stir in the cherries, lemon juice and almond extract. Sprinkle with the granulated sugar and the salt, toss and set this filling aside at room temperature. Position a rack in the lower third of oven and preheat to 425 F. Remove the pie shell from the refrigerator and scatter the almond meal over the bottom.

Remove the other dough round from the fridge and, using a pastry wheel with fluted edge or a sharp knife, cut out ten 3/4-inch-wide strips for the lattice. Pour the cherry filling into the pie shell, mounding it slightly in the center and dotting with the butter.

To make the lattice, arrange up to half of the dough strips vertically over the filling, then fold back every other strip onto itself and place a horizontal strip over the unfolded strips. Unfold the vertical strips, fold back the previously unfolded strips and place another horizontal strip. Continue in this manner to make a lattice. Trim the dough strip overhang to 1/2 inch, fold the bottom crust dough up over ends of the strips and crimp the edges with a fork to seal. Brush the lattice crust (but not the edges) with milk. Sprinkle the lattice with the coarse sugar.

Place the pie on a baking sheet and bake for 15 minutes. Reduce the oven temperature to 375 F. Continue baking for about 1 hour longer, until the filling is bubbling and the crust is golden brown, covering the rim with a foil collar if it is browning too quickly. Transfer the pie to a rack and let cool completely. Cut into wedges and serve.

Sarah Putman Clegg is a veteran cookbook editor and writer who lives in Northern California.