“You can get stronger through hardship if you focus on what you’ve gained,” Liz Scott says before a crowd of more than 2,000 who have gathered on the UCLA campus for the annual L.A. Loves Alex’s Lemonade fundraiser. Her voice breaks as she continues, “I often wonder what kind of woman Alex would have become. I know she’d be a wonderful daughter and a loving sister.” 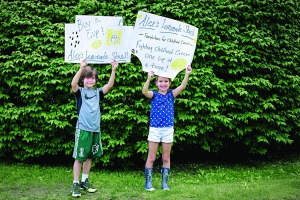 As the co-executive director with her husband, Jay, of the Alex’s Lemonade Stand Foundation, Liz has attended hundreds of these events. Her mission is to save other parents from the wrenching heartache she and Jay experienced when their 8-year-old daughter Alex died from neuroblastoma, a form of pediatric cancer.

Alex had been diagnosed two days before her first birthday; when she was 4 she received a stem-cell transplant and hopes were high that she’d beat the odds. “When I get out of the hospital, I want to have a lemonade stand,” she told her parents. “I’m going to give the money to my doctors so they can cure other kids who are sick.”

That first lemonade stand raised $2,000. When the treatments stopped working, Alex decided she wanted to raise $1 million before she died. As news of her courage spread, people nationwide held their own lemonade stands and sent Alex the proceeds. She died in August 2004, two months after she met her goal.

Liz and Jay continued what Alex had begun. “We had the power to make a difference,” Liz says. “Everything Alex had done in her life was so unselfish, it seemed very selfish to stop.”

The foundation has raised more than $120 million and funded 550 research projects. Liz has been able to watch children whose lives were saved by medical breakthroughs grow up and move on to college.  “You have to give yourself permission to find meaning and happiness in your life,” Liz says. “I’m learning a new normal and a way to be grateful for what I have— including my three sons—and the work we’re doing with the foundation.”

For more information on how to donate or get involved, go to alexslemonade.org.