Chad Houser’s Café Momentum serves up a lot more than dinner—it brings opportunity and hope to hundreds of at-risk teens. 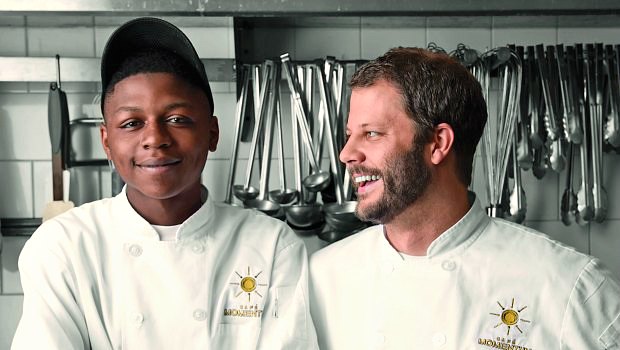 Chef Chad Houser was a self-described “guy who had been peeling potatoes for 18 years” with no experience in youth outreach when an ice cream contest in 2009 changed his life. Suddenly he found himself teaching eight teenage boys from the juvenile justice system in Dallas how to make ice cream as part of a fundraiser for a local farmers market.

“When I first met these kids, I realized I had stereotyped them,” Chad says. “But all eight of them looked me in the eye, called me sir. They were so enthusiastic to learn.” At the end of the contest, they stood proudly next to local culinary college students, and one of them won the contest, inspiring Chad to want to do more. The experience became the seed of Café Momentum, a nonprofit fine-dining restaurant and life skills program for youths exiting the juvenile justice system.

“We wanted to do a nonprofit, but we didn’t even know how that worked. We didn’t know about Cafe Reconcile [in New Orleans] or FareStart [in Seattle]. We kind of played it by ear,” Chad says. After two years of organizing successful pop-up diners where the teens worked as part-time help, Chad and his partners opened a permanent space in downtown Dallas in January 2015.

Interns earn $10 per hour as they work every position, from host to line cook to dishwasher. Yet Café Momentum is about more than teaching restaurant skills. The organization helps with housing and health care and even provides case workers to ensure the teens succeed after they leave the yearlong program.

“They show us how to slice and dice and how to pronounce things on the menu like quinoa and pappardelle,” says Arissa, a 16-year-old intern who went to juvenile detention for a year on assault charges. “The most important thing I’m learning here is respect for how other people feel,” she continues. “Now I can put myself in other people’s shoes.”

Chad says the teens believe in themselves “because we show them that it’s not just us believing in them, it’s the entire staff and the clientele. And that’s empowering.”

Emily Wise Miller is the web editor at Live Happy.