Tiffani Thiessen’s special ingredient for great dinner parties has more to do with comfort than food. 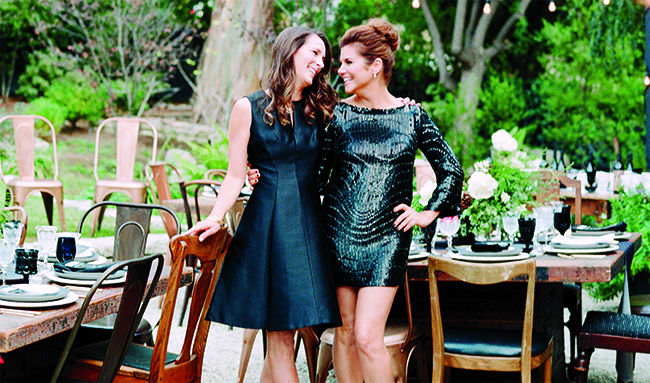 Tiffani Thiessen’s special ingredient for great dinner parties has more to do with comfort than food.

Imagine: the morning of a big family dinner with three generations of relatives, half of them from out of state, multiple dishes to cook and no working oven. What do you do?

“Thank the sweet Lord that our neighbors were going out to eat! So I took the food next door to cook,” says actor Tiffani Thiessen, who starred in USA Network’s White Collar, for six seasons, as well as earlier series Saved by the Bell and Beverly Hills 90210.

Tiffani, host of the Cooking Channel’s Dinner at Tiffani’s, laughs as she talks about the dinner party that almost didn’t happen. “I got extra cardio in that day, that’s for sure!”

But sister-in-law Jill Smith points out that, “even if that meal hadn’t cooked, and we’d just had cheese and crackers, we still would’ve had a great time. With our families, it’s always about being together and enjoying each other.”

Whenever possible, Tiffani and Jill like to co-host dinners together, including a recent outdoor party with family and friends to celebrate Tiffani’s new show. Jill, whose brother, actor Brady Smith, is Tiffani’s husband, says she often forgets her sister-in-law is a celebrity. “Something I like best about Tiffani is just her warm heart and her ability to make people feel comfortable and at home,” she says.

Tiffani says the great cooks in her family were her primary influences in the kitchen. But they taught her something else, too: “My mother, grandmother and aunt have always said a good hostess is not just someone who puts great food on the table, but someone who makes people feel comfortable.”

Even while working, often commuting from coast to coast, and raising a daughter who is now 4½, Tiffani enjoyed having people to her home for dinner. Dinner at Tiffani’s (a play on the 1961 movie Breakfast at Tiffany’s starring Audrey Hepburn) became a joke among friends invited to the Thiessen-Smith home. The phrase stayed with Tiffani.

“I thought, ‘That’s a great title.’ I was talking one day with my husband, and we thought this is probably a space we could kind of explore. That’s how we came up with the concept. Given that I’ve been in the business for so long—32 years going on 33—it’s amazing the slew of people I’ve gotten to work with and have been fortunate enough to stay friends with.”

So, what if she invited these old friends to reconnect over Dinner at Tiffani’s? The Cooking Channel loved the idea and bought it.

Tiffani emphasizes that she’s not a professionally trained chef. The menus and recipes she’s created for the show are not complicated—and that’s by design, to demonstrate how easy entertaining can be. “I want people to be able to do what I’m doing on TV.” It’s not about being perfect; it’s about creating and celebrating special moments with people we care about, she says.

Jill says Tiffani’s easy-going personality contributes to the relaxed ambiance. “It’s just the ease of her personality. She’s just one of the most charming, down-to-earth people I’ve ever known. She’s not trying to put on a show and to be incredibly perfect. It’s not all about her, but about the entire event,” Jill says. “And she’s a hard worker, too. She’s the one who’s up in her pajamas making sure everything is ready for a party the next day.”

The sisters-in-law have complementary skills and often co-host dinner parties for family and friends. They communicate about the overall look and feel they want and any special details, then focus on their specialties: Tiffani on the food and Jill, who is a graphic artist, on the décor.

For their recent party, they started by creating a Pinterest board to collect and share ideas. Later, they would show the board to their floral designer and to a friend who would prepare the desserts.

They wanted it to be festive and elegant, yet cozy and not fussy. “We didn’t want everything to be incredibly perfect,” Jill says. They chose a color scheme of classic black and white, and decided to host the party outside at a collection of tables—almost like a picnic. They used dining chairs from different sets, and combined contemporary black and white stemware with delicate crystal.

Tiffani acknowledges that dinner parties can be intimidating, but that shouldn’t be an excuse to not have them. “It’s stressful! I won’t tell you it’s not stressful,” she says. “But matching anything doesn’t matter. Sometimes the table looks better when nothing is matched. It doesn’t matter what your house looks like—if you have nice weather, do something like a picnic outside. It’s about what you’re putting on the table and about connecting with each other. You don’t have to have fancy dinnerware to show people you care.”

Hosting a dinner party is a lot like acting, Tiffani says—hopefully, without the drama of an oven-less family dinner. “This is just pure passion for me. It’s an extension of my creativity. There’s an artistic side to it,” she says.

The concept for the event, the look and feel, the menu and décor “go hand in hand,” she says. Each component contributes to the overall look and feel. Tiffani also puts thought into her guest list, making sure the “bigger personalities” don’t overwhelm the introverts.

Tiffani says food is one of the few things that touches people’s emotions. “I think music is the only other thing that does that,” she says. “Food can make people feel happy, feel comfortable. And that’s something I really wanted to convey in the show. You know everybody is so busy on computers, tab-lets and phones, and we don’t make eye contact, and we’re losing a sense of connection. So I think it’s even more important for people to stop, sit down as friends, families and colleagues and share a meal. I hope that’s something that never changes.”