The Voice of Hope

Maya Angelou made an indelible impression on everyone who had the opportunity to meet her. 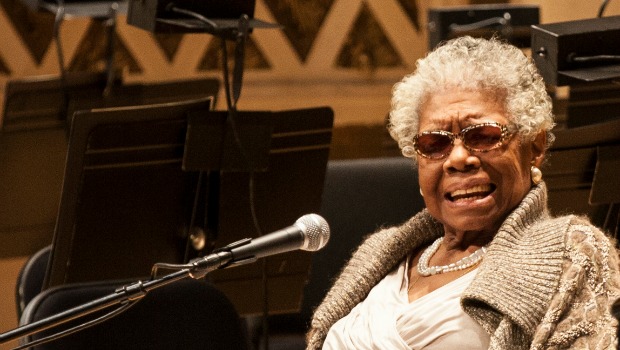 Since learning of Maya Angelou’s death on Wednesday, the world has come alive with tributes to this author, poet, civil rights activist, teacher and playwright. The woman who, as a child, went five years without speaking, grew up to become a universal voice of hope, and her passing at age 86 has prompted a flood of tributes and heartfelt appreciation. Although we all knew she was an amazing, adored and admired woman, her death has reminded us just how many people’s lives Maya transformed—whether or not they ever met her.

I was fortunate to have had two encounters with Maya. The first was while attending the Cincinnati Symphony Orchestra’s performance of Aaron Copland’s Lincoln Portrait last November, which she narrated live from the stage. Before the performance, she gave a pre-concert talk, and nearly every seat was filled. It was, according to the CSO, the most-attended pre-concert talk in their history.

Sitting in her wheelchair and telling stories from the stage, Maya looked frail and tired. But when she opened her mouth, and that melodious voice began weaving stories as only she could do, it was as strong as it had ever been. Time may have dimmed her eyesight and weakened her gait, but it couldn’t touch that beautiful, unmistakable voice.

She had already silenced that voice once, when she was 8 years old and revealed that her mother’s boyfriend had raped her. When her uncles murdered the man, young Maya believed her words had killed him. She refused to speak for nearly five years, and it was only when her grandmother said she believed Maya was destined for great things that the young girl began speaking again. What if her grandmother was right, she wondered. What if she truly was something special?  So Maya began using her voice again—and what a voice it was.

As we all learned, Maya was, indeed, something special. When I interviewed her for Live Happy a few days after her performance in Cincinnati, she expressed surprise that people—especially young people—were still interested in her.

“I have Facebook fans,” she said with amazement, explaining that someone on her team had created a page for her. “They told me if you have a million likes, it’s a big deal.”

As millions of Americans stop to reflect on her memory, Maya's beautiful words and singular voice still seem like a very big deal.