Measuring Happiness at the United Nations

Live Happy joined other experts on the study of happiness at the United Nations to discuss “The Paradox of Income and Happiness.” 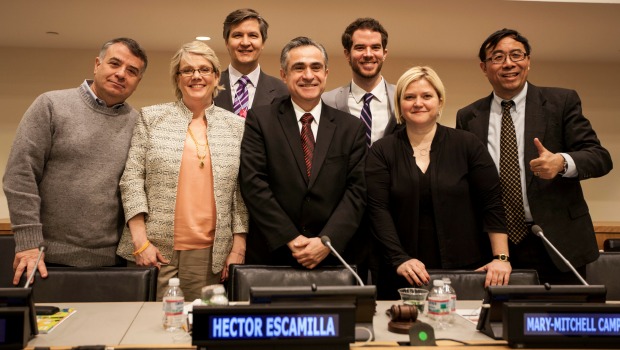 Experts on the study of happiness convened at the United Nations Thursday to discuss “The Paradox of Income and Happiness,” a look at how research is helping governments measure happiness—and how that is contributing to better outcomes of well-being in populations. Jeffrey Brez, chief, NGO Relations, Advocacy and Special Events, opened the session by explaining that happiness has become a topic of global interest.

From Bhutan to Britain

“In the past few years, we have seen so much more interest around the [International Day of Happiness],” Jeffrey said, referencing the March 20 event that was established by the U.N. General Assembly in 2012. “This attracts people from around the world.”

Thursday’s briefing was designed to focus on how the science and research-based findings on happiness can be applied by governments, nongovernment organizations, schools and individuals to create a happier planet. Mary-Mitchell Campbell, Broadway conductor and director of Finding Neverland, served as moderator for the event and discussed her experiences working with the poor in India. It was there, she said, that she learned some truths about happiness—including that money has very little to do with true happiness.

Alejandro Adler, a member of the International Expert Well-being Group, echoed Mary-Mitchell’s discovery, pointing out that while the gross domestic product has become synonymous with progress, there are very marginal increases in happiness between countries, “which means increasing GDP does not make countries happier.”

In reality, added Ami Dar, founder and executive director of the website Idealist.org, becoming happier requires really just one simple decision: to do the things that make us happy.

“We seem to know what makes us happy, and we’re all experts at what makes us unhappy,” he said. “So the real question is, why don’t we do what we need to make us happy?”

Learning to be happy

Happiness learned early in life will last forever, and the opportunities to change young lives through positive education were illustrated by both Kaiping Peng, Ph.D., and Hector Escamilla, Ph.D. Presenting evidence on how positive education has been implemented in China and Mexico, respectively, they said it can help students find purpose and meaning—something that will positively change their future and shape their decisions.

“It’s very popular in China,” Kaiping said. “We are changing the Chinese mindset about education, about happiness, about well-being.”

On a global level, more countries are embracing the idea of happiness as part of public policy. Deborah Heisz, COO and co-founder of Live Happy, noted that while the scientific study of happiness is relatively new, it has already provided a convincing volume of evidence on its many benefits, from better health and relationships to greater career satisfaction.

“While we still have much to learn about happiness and where it can take us, the one thing we know with certainty is that a personal commitment to happiness from each and every one of us will make a difference on a worldwide level.”