A New Way to Connect Communities 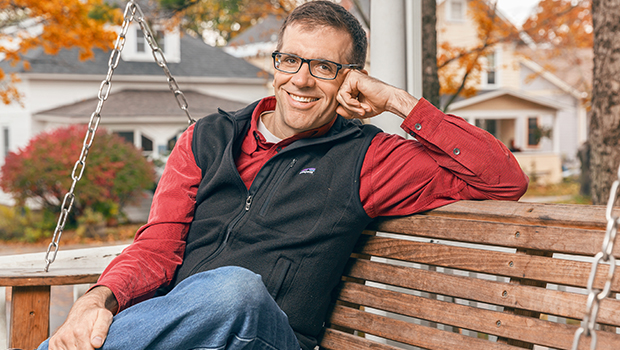 Michael Wood-Lewis finds his passion connecting neighbors with each other.

At the edge of his white Victorian porch a few blocks from the shore of Lake Champlain, Vermont engineer and social entrepreneur Michael Wood-Lewis leans back in his chair, crosses one ankle over a khaki-covered knee, and looks down the shady street lined with oaks and older, well-loved homes.

“Hey—” He nods to a young neighbor walking down the sidewalk. “How’s it going?” The young man, a violin case strapped to his back, pauses, and the two chat for a few minutes about music, music teachers, performers and what’s going on in the neighborhood.

Neighbors who know each other 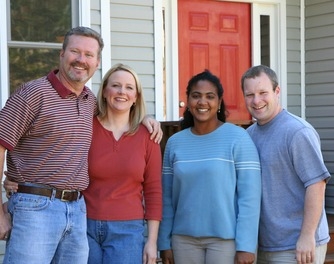 It’s a simple moment, an instant of connection, and the kind of conversation Michael loves and initiates a half-dozen times a day with neighbors, young and old. It’s also the kind of connection that characterized the Ohio community in which he grew up—the kind in which people dropped by the house with casseroles when Michael’s mom was ill with cancer and where he’d delivered newspapers on routes inherited from his older brothers.

“That kind of contact has always been important to me,” Michael says. It creates an awareness of the people around you, their needs, their strengths, what they have to offer. It’s what builds a group of people who will support one another, work together for common cause, or who will reach out to one another when help is needed. “It’s what builds a community.”

Unfortunately, when Michael and his wife, Valerie, moved to the Victorian 14 years ago, a sense of community is not what they found. People pretty much kept to themselves, Michael says. “You know the Robert Putnam book Bowling Alone? It was just like that.” Everyone was busy with their own lives, trying to make a living, keep their kids healthy, pay the mortgage and put one foot in front of the other.

So forging connections among his neighbors became Michael’s single-minded purpose. And, after several traditional approaches, he began thinking like the engineer he is: He started to build. In this case, it was a front porch on which people could gather. A digital one. If people had no time to sit around on their own front porches and chat with neighbors, he reasoned, then maybe they would at least cruise by a digital one while they were checking their emails.

The idea was that people from the five streets in his neighborhood and ZIP code would have access to the porch. They could post about anything—lost dogs, school candy sales, a visiting skunk, political candidates on the loose, new bus routes for kindergarteners, property tax hikes, whatever—connect, get to know each other and then take those relationships to the street. Then the next time they saw each other at the market, they’d stop and chat. Maybe introduce their spouses. Or kids. Or other neighbors.

Civility and passionate discussion would be appreciated; bigotry and hate mail would not. The idea was stunningly simple, and nearly everyone in Michael’s community joined the Front Porch Forum, as Michael finally called it. Today, eight years after its launch, the community-building service has helped spawn a number of other community building services and is connecting 85,000 residents in Vermont, New York and New Hampshire.

But, more important to Michael and the communities the website serves, anywhere from 50 to 75 percent of residents in each area where it’s available regularly hang out on their neighborhoods’ Front Porches.

“It’s gratifying to do work that’s clearly helping so many people in my broader community,” Michael says. “Especially as a parent of school-aged kids—it gives them an example of the kind of meaningful life I hope each of them will have.”