Joy held sway as people young and old came out this year to celebrate the International Day of Happiness. 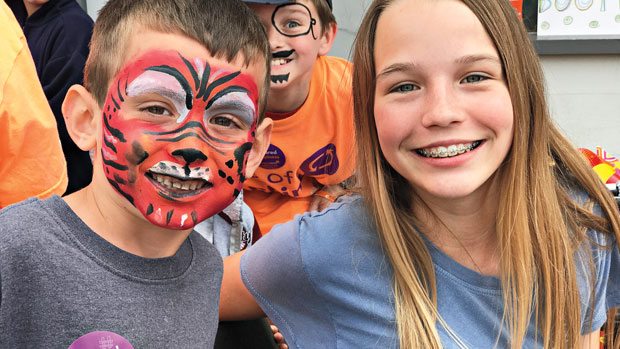 Visitors to Live Happy Walls around the world share acts and thoughts of kindness.

It was as if the joyful song “Dancing in the Street” came to life as thousands of people all over the globe celebrated this year’s International Day of Happiness.
A record 97 cities hosted events and activities the weekend of March 20 centered around Live Happy’s Happiness Walls, where people were invited to post cards telling how they share happiness with others. (For each card posted, Live Happy donated to the local Big Brothers Big Sisters chapter.)
From Columbia to Canada to Korea, from Australia to the U.K. to Mexico and the United States, there was laughter, hula-hooping, face painting and, yes, singing, swaying, records playing, and dancing in the streets, halls and schools sporting the giant orange walls. Here are accounts from just a few of the scores of happy gatherings.

Two-year-old Leili and her best buddy 4-year-old Noah were dancing to their favorite song, Mark Ronson and Bruno Mars’ “Uptown Funk.” They weren’t alone. Some 100 or so people, a dozen on Kangoo Jumps shoes, couldn’t keep still as a playlist of feel-good tunes from Justin Timberlake, Pharrell Williams and Meghan Trainor played from speakers set up on the pier at Redondo Beach, next to the bright orange Happiness Wall.
But if Leili and Noah didn’t have a care in the world, others were more reflective. Sarah Johnson had lost her father just two weeks earlier. It was her dad’s giving spirit and relentless optimism that allowed Sarah to find comfort in the warmth and hugs of her friends who joined her at the Happiness Wall.
Keeping a watchful eye on Leili was her dad, Jaylen Moore. He’s also one of the stars of SIX, the History Channel series that is based on real events following a Navy SEAL Team Six on a covert mission to eliminate a Taliban leader in Afghanistan. To prepare for their roles, Jaylen and his cast members had gone through the SEAL FIT training, which involved, among other rigors, grueling drills while carrying 45 pounds of gear and being woken in the middle of the night, sprayed with ice-cold water and asked rapid- re questions like, “Who was the 20th president of the United States?” (For the record, it was James Garfield.) 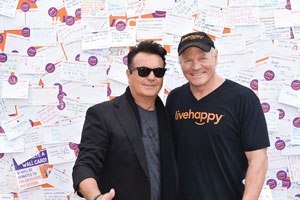 Jaylen was here to give thanks to someone who had helped him get through that training: Jeff Olson, Live Happy founder and author of The Slight Edge: Turning Simple Disciplines Into Massive Success & Happiness. “That book kept me focused,” Jaylen says. “I’d remember the message that every small step you take is significant in moving toward your ultimate goal.”
For his part, Jeff, who addressed the United Nations on a previous International Day of Happiness, was thrilled to spend this year at the Redondo Beach Pier. “I love the energy here,” says Jeff. “This is the kind of celebration we’d hoped the event would become when it started five years ago.”
The afternoon ended with a live rendition of “Sweet Caroline,” Jeff’s favorite song. The crowd grew larger. People crossing a pedestrian bridge stopped. Everyone knew the words to the Neil Diamond classic, and for several joyful minutes on that sun-washed wharf, everyone was smiling as they sang: “Good times never seemed so good.”

A Memorable Time in Miami

In Miami, the Happiness Wall at the World Happiness Summit March 17–19 was at the center of the action, with attendees from around the world pausing at the wall to jot down how they like to share happiness. Jackson McClung, age 12, who was tagging along with his mom, revealed a depth beyond his years when he wrote on his card, “Sharing compassion for others and giving them due kindness and respect.” 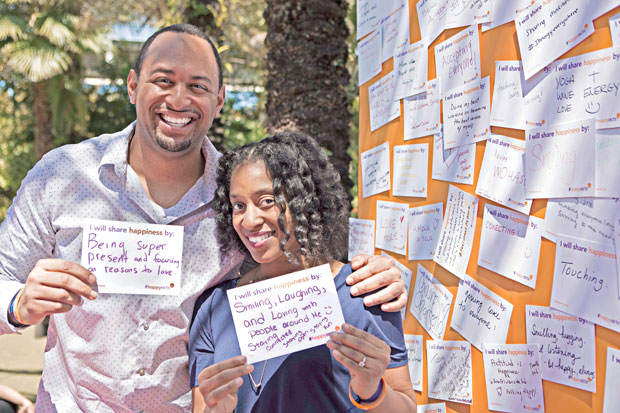 Jeff Moore, a Harlem English teacher and founder of Everyday Power, shares stories of positivity and courage on everydaypowerblog.com to inspire his students and others searching for meaning online. He and his fiancee, Danieta Morgan, stopped by the Happiness Wall to greet others and add their cards. “Happiness is finding reasons to give love,” Jeff says. “It’s so easy to focus on negativity. If we make a concerted effort to focus on love, we can be happy.”
Saamdu Chetri, Ph.D., executive director of the Gross National Happiness Centre in Bhutan, was at the summit for the governmental track. Wearing a monk’s red robe and a prominent button of the young king of Bhutan, he says, “We also create a promise toward happiness” on the International Day of Happiness. “We write what makes us feel happy on paper and post those sentiments on trees.”
Bhutanese also celebrate the day by gathering in parks, singing songs, dancing and doing service for others. The day, he says, is also about celebrating the spring equinox. “Spring is the new beginning of everything and happiness generates from there.” The country’s definition of happiness is serving others, living in harmony with nature and realizing your own innate wisdom and values, he says.

At the Shops at Willow Bend in Plano, Texas, mallgoers couldn’t resist stopping by the big, orange wall to see adults posting cards and kids hula-hooping to a DJ’s happy tunes. Soon they were posting cards of their own, like the nurse who said that “taking care of people” made her happy. 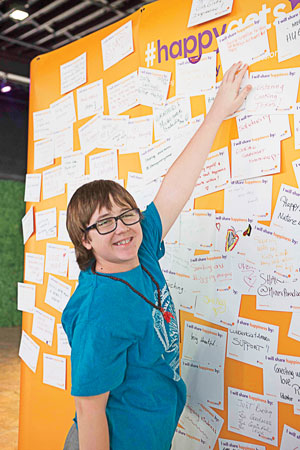 As Kelcie Koerner watched her daughter hula-hoop for what seemed like an eternity (but was really only about 15 minutes), she explained that smiling and laughing routinely keeps her in good spirits. She recently participated in an event put on by the group Random Acts, which was founded by Supernatural star Misha Collins to utilize his following to do good things in the world. “We gave lollipops and gift cards for gas to random people we didn’t know and they didn’t know us, and that was pretty fun,” Kelcie says.
The day’s events even lured employees out of their shops to see what all the commotion was about. Haylee Bova, who works at a retail beauty boutique, grabbed a stack of #HappyActs cards to pass out to her customers. Her personal philosophy on spreading happiness is found in the small, kind gestures we can do for each other every day.  “If you are at the grocery store and have trouble reaching s something and somebody comes and helps you, or someone gives you a parking spot, those things go a long way,” she says.
By midafternoon, the wall started to fill up with cards and Heather Hutmacher, executive director of the local chapter of Big Brothers Big Sisters, was thrilled. Heather says Live Happy’s donations help with recruitment, coaching and training, and the matching process.
Time is the most important thing people can give to others, Heather says. “Any kind of support you can get from your fellow human beings is very important,” she says.
(Visited 86 times, 1 visits today)
Popular Articles