Win or lose, Chicago Cubs fans have an incredibly positive attitude that gets them through season after (disastrous) season. 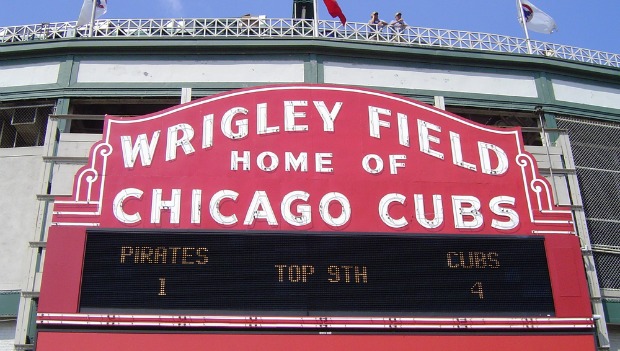 What can Cubs fans teach us about happiness?

More than a century has passed since the MLB’s Chicago Cubs won their last World Series, and you would think Wrigleyville would be a barren ghost town. But it’s not, and despite coming up short season after season, Cubs fans still show up for Opening Day, filing into their sainted cathedral of all things baseball with the hopes and dreams that their beloved team will make it into October… or at the very least, a series sweep.

George Ellis, a lifelong Cubs fan and managing editor for The Heckler, a satirical sports newspaper, wrote The Cubs Fan’s Guide to Happiness as a way for fans to cope with the disappointment of losing. “The Cubs don’t really win that often,” George says. “If Cubs fans can stay happy, basically in the face of might be a lesson there: We somehow stay optimistic despite the fact history hasn’t given us a reason to be.”

It is tough being a lifelong Cubs fan, but the “Loveable Losers” will always bleed blue. They remain hopeful for the future, bounce back after defeat (a lot of defeat) and have a good time doing it. Spend one day at Wrigley Field, and you feel the optimism. That’s why George believes his and his fellow Cubs fans’ unique perspective can teach the rest of us a lot about happiness.

“Win or lose, we're in heaven”

There are other things to be happy about: watching baseball in one of the remaining original and historic ballparks; you never know who will show up to sing the seventh-inning stretch (hey, maybe it’s Bill Murray or Billy Corgan or Will Ferrell channeling Harry Caray); Chicago-style Vienna Beef hot dogs; and beer. No matter what happens on the field, there is still plenty to be happy about in life. If they happen to raise the “W” flag that day, that’s just icing on the cake. Above all, George says, “you gotta have fun.”

As Wrigley Field celebrates its centennial this year, the only thing older than the ballpark is the home team’s championship title drought, but even that doesn’t stop these fans from showing up. Cubs fans have a philosophy for when things don’t seem to be working out: “There’s always next year.” They don’t let the previous season stand in their way of hoping to see their home team hoist the Commissioner’s Trophy in the next Fall Classic.

“We’re always looking for reasons to get over that hump,” George says. Whether it’s signing great players throughout the years, new ownership or a developing farm system, Cubs fans are always hopeful for what the future could bring. “Maybe this time it’s Rizzo and Samardzija…if he’s not traded,” he adds.

In a not-so-shocking turn of events, pitcher Jeff Samardzija was traded to the Oakland A’s on July 5.

The fact that the Cubs still have a fan base is a testament to their resilience. After the collapse of the 2003 season, when the Cubs were only five outs away from going to the World Series and breaking the Curse of the Billy Goat, fans were devastated. “It was the saddest city I have ever seen,” George recalls.

“But in a couple of weeks we were talking about how next year’s going to be ‘the year.’ We were so close. We have [Kerry] Wood and [Mark] Prior. They both can’t possibly get hurt.”

The following season, the two star pitchers, dubbed the “Chicago Heat,” did, in fact, suffer injuries. And despite the strong season, the Cubs missed the playoffs. But streaks and curses can’t last forever, right? “If you stay loyal long enough, when it does actually happen, it will be the best payoff in the history of sports,” George says.

Fans of the Cubbies share something very unique in sports: Most, if not all, of them were not alive the last time the North Siders won a World Series. That’s an impressive feat no matter which side of the city you claim. “There’s something fun in banding together, and just because it hasn’t gone our way,

I think there’s a bonding experience when a group of people are fighting for the same thing,” George says.

Thanks to superstation WGN, even the fans who move away from Chicago can still watch games and keep their Cubs connection. When the day does happen and the Cubs make it to baseball’s Promised Land, fans like George will be able to truly witness something amazing together.

The friendly confines of Wrigley Field

Most Cubs games at Wrigley Field take place during the day, so more often than not, the Cubs fan will have to take the day off from work or school to attend.But that’s OK, because a day in “The Friendly Confines” with good friends, njoying the great game of baseball and creating positive memories that will last a lifetime make playing hooky worth it—just try not to catch any home run balls on camera. “One moment you’re in the middle of a bustling Chicago neighborhood, and the next moment, you’re inside a stadium that has been around for 100 years,” George explains.

“Say what you want about the ballpark needing some work, but the scoreboard, ivy and Old World feel of the place just make it special.”

Life is hard sometimes, and there are plenty of reasons to jump off the happy wagon, but where’s the fun in that? Cubs fans prove that there are things in life worth being optimistic about and the beer cup is half-full. Since there’s no crying in baseball, when life starts shelling you with grand slams, do what every self-respecting Cubs fan would do: Just throw it back.