Sometimes the best holiday memories are made when you least expect it. 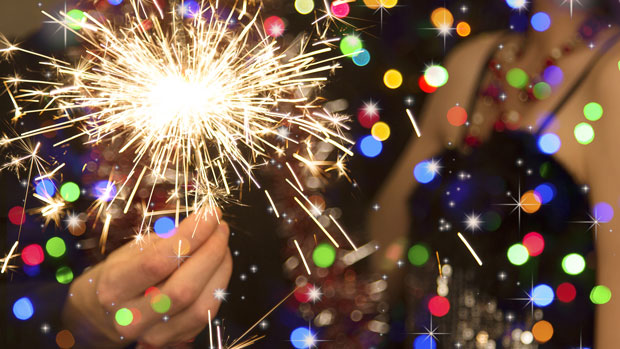 Sometimes the best memories are made when things don't go as planned.

Traditions help give our holiday get-togethers meaning and comfort. What cherished memory springs to mind for you? Is it your family’s quirky rituals around opening gifts or the certainty that the chestnut stuffing will be sensational? Some know exactly where everyone will sit at the holiday table, including Dad at the carving station and Aunt Ida and Uncle Ed where they have the best shot of claiming the turkey legs.
Then there are the holidays that take an unexpected departure in ways that test our abilities to improvise, to find a lesson in near disasters or to move on through grief. Here, three people share their most unforgettable holiday celebrations.

Caroling in the Emergency Room

Rade B. Vukmir, M.D., Pittsburgh, Pennsylvania
As an emergency and critical-care physician for three decades, I’ve worked a lot of holidays. Anyone who’s in the emergency medicine business—nurses, doctors, secretaries, administrators, paramedics—has. It’s often an especially busy time because doctors’ offices and urgent-care centers are closed and we get our share of holiday-related emergencies, like people who fell off a ladder when they were decorating the tree. And then you have some people coming in because they have nowhere else to go and they want to experience some holiday spirit. Maybe they’re elderly or disadvantaged.
We do our best to be welcoming. There are always trays of cookies and tins of popcorn that the nurses have put out. You might not be with your family, but there’s a strong feeling of camaraderie and the sense that you’re where you need to be.
The morning of Dec. 24, 2006, was quiet. The nurses were restocking supplies in the patient rooms before things got too busy. Then, in the late morning a patient in her mid-80s was brought in by ambulance. She’d fallen and hit her head. Like a lot of elderly patients in the ER, she seemed disoriented by her surroundings.
I stepped outside so the nurses could help her get into a hospital gown and ready for suturing. I heard one nurse ask from behind the closed curtain if the patient had a favorite Christmas carol. She responded, “Silent Night.” And then in tones as pure and clean as angels, the nurse began to sing and the patient joined in.
Silent night, holy night
All is calm, all is bright
Round yon virgin,
mother and child
Another nurse came in from the room where she’d been working and then still another nurse.
Holy infant so tender and mild
Sleep in heavenly peace,
Sleep in heavenly peace.
As I finished the laceration repair, the nurses continued, through all three verses of “Silent Night” and then on to “Joy to the World” and other Christmas carols.
That experience would inspire the title of my second book, The ER: One Good Thing a Day. That’s all any of us can hope for—to do one good thing a day, and achieving that, led by the dedication and compassion of our nursing team, made that Christmas as good as it gets.

Finding a Mission After a Christmas Mugging

Jason Woods, Little Rock, Arkansas
It was close to midnight on Dec. 23, and I was waiting for the bus in a deserted town on the outskirts of Peru. I was returning from a holiday celebration with some other members of the social-justice nonprofit where I was doing an internship. It was a long way from my home in Stillwater, Oklahoma, but while I missed spending the holiday with my family, I was flying to Buenos Aires the next morning to meet some friends, and I was excited about that.
When I was approached by a guy asking me for money to ride the bus, I said no. I’d seen him a few minutes before counting his money as he came out of a store, so I knew he had enough change for the bus. When he said, “If you don’t give me money I’m going to slit your throat,” I pretended not to understand Spanish. Then he put his arm around my shoulder and ran his hand across my throat to pantomime his intention. After a couple of minutes of the standoff, as a few people started showing up at the bus stop, he put his hand in my pocket, grabbed my cellphone and ran off.
I spent Christmas Eve alone on a layover in the Santiago de Chile airport and then got to Buenos Aires on Christmas. My friends were arriving the next day and the hostel was pretty much empty except for a woman from California named Sarah who was about my age. We decided to go out for a Christmas dinner together and, after lots of searching, found an Italian restaurant that was open. Over pizza and a bottle of wine, we chatted for the next four hours, talking about everything—experiences in South America, relationships, our families. Sarah could tell that I was still kind of flustered by the mugging, and she was very open, friendly and eager to celebrate with me. It ended up being a pretty fabulous Christmas.
It’s been six years now. Sarah and I haven’t seen each other again, but we’re Facebook friends, and she’s definitely left her mark on me. I still travel a lot in my job as a writer for the nonprofit Heifer International, and I try to be there for people who are beset by minor disasters the way Sarah was there for me.
Coming back from Tanzania with my photographer not long ago, we ran into a British woman at the airport who was in crisis mode. The airline had lost her reservation and after many hours she still couldn’t get on a plane. With no place to eat at the airport she was pretty famished. “I would kill for some Indian food now,” she said. The photographer and I had some time to spare, so we left the airport, went to a local Indian restaurant we knew and, after some finagling with the restaurant on how to do takeout, loaded a plate for her from the buffet. When we showed up again at the airport, she was amazed and overjoyed. That’s the Sarah effect. She turned me into someone who tries his best to look out for wayward travelers.

The Family Dog Offers a Lesson in Coping With Grief

Rachel Ghadiali, Alexadra, Virginia
My dad passed away in March 2013 and none of us were in the mood to celebrate Christmas that year. My mom had always gone all out; she actually had a whole room in the house filled with Christmas decorations. We’d put up a big tree and lots of smaller ones, along with a bunch of different Santas and tons of lights. That year we thought about canceling Christmas, but instead mom put up one small tree and a few trinkets. Every year I would bring my dad a box of chocolate-covered cherries, and I still brought them that year. 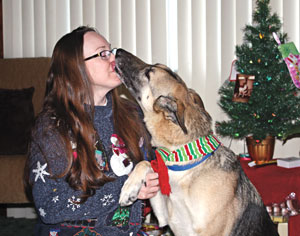 We opened that, along with our other gifts. My mom had cooked a traditional Christmas meal, and we were looking forward to that. At the last minute, we decided to visit Grandma (my dad’s mother), who lived only a few minutes away and was with other family members. So my mom, my brother, my husband and I all hopped into the car. We left dinner on the stove and told Rosy, my well-trained 5-year-old German shepherd, we’d be right back.
When we returned about 30 minutes later, Rosy greeted us like her normal, happy-go-lucky lovable self. But when we walked into the kitchen it was mayhem. We’d left Rosy alone with food a million times and she had never counter surfed before. But this time she had gone to town, pulling everything off the stove to enjoy her own Christmas feast and leaving only scraps for us on the floor.
We were shocked, and then we all burst out in laughter. None of us were angry. It was almost like there was so much sadness in the house, Rosy did what she had to do to break the tension and help us laugh again. So, we cooked up some hamburgers, made nachos with chips and cheese out of a can and broke into the cheeseball and fruitcake that mom’s friends had given her as gifts. We ate dad’s chocolate-covered cherries and, as we did every single Christmas, we sat down as a family and watched A Christmas Story. Our spirits lifted, thanks to Rosy, and it felt as if dad were there right beside us.
***

3 Ideas for a Memorable Holiday Celebration

Want to mix things up a bit? Here are some ways to tweak your annual Christmas, Hanukkah or New Year’s festivities.

Robert Egger, president and founder of the nonprofit L.A. Kitchen, decided to try an alternative to the gala
fundraiser this year. In a citywide weekend of dinner parties called Shared Plates, people invited guests into their homes for a ticket price of usually $75 and provided a communal meal. The host or co-hosts covered food costs and 100 percent of the ticket sales went to fight hunger.
“We wanted to bring things back to street level and instead of one big light in a ballroom, we’d have hundreds of lights all over the city,” Robert says. “People did everything from a pizza party in a USC dorm to elaborate sit-down dinners in Beverly Hills.” The concept can easily be adapted for a local shelter, food bank or any cause of your choice. For host tips, check out sharedplates.org.

Host a Meetup, or Be a Guest at One

Last year, Regina Rodríguez-Martin, an American culture coach, tried an experiment. She posted notice of a Thanksgiving Chicago Language Exchange Meetup, inviting expats of all stripes to her home for a traditional holiday feast. Everyone who responded was assigned a dish (she handled turkey duties), and on T-Day her one-bedroom home was filled with guests from Russia, Honduras, Mexico, Kazakhstan, Lebanon and China, along with a few local friends and neighbors. “I’ve been that person with no family in a new city, wondering what I’m going to do on a holiday,” Regina says. “Not only did I feel I was extending a welcoming hand, it turned out to be a really great party and I’ll be doing it again this year.” Start your own holiday meetup.

For a fun twist on the potluck, make it a progressive dinner, where each course is served at someone else’s
home. (This works best for friends or family who live within walking distance.) The afternoon or evening
might begin with munchies and cocktails at one home; appetizers, soup or salad at the next; the main course at a third home; and dessert at your final destination. Search Pinterest for inspiration and ideas.