Noah Galloway Is Living With No Excuses

Army veteran Noah Galloway fought his way back from despair to live a life with no excuses. 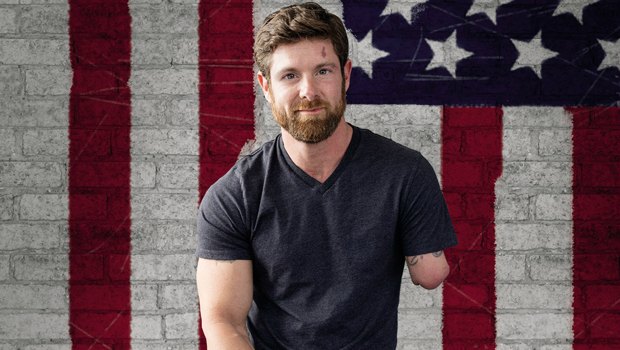 The veteran and amputee has three important reasons to keep winning at life.

Some people will bump up against a minor obstacle and find it overwhelming, while others can survive horrific circumstances and embrace life in the aftermath with incredible courage and fierce determination. Noah Galloway is firmly in the second camp.

A member of the Army’s 101st Airborne Division, Noah was three months into his second tour of duty during Operation Iraqi Freedom in December 2005 when he was severely injured by an improvised explosive device (IED). He lost his left arm above the elbow and his left leg above the knee; his right leg and jaw were badlyinjured.

Having fought his way back from both the physical and mental wounds he sustained, the father of three is now a personal trainer, model and motivational speaker. Noah stars on Fox TV’s American Grit, where he and three other veterans lead teams competing in a series of challenges modeled after military training exercises. “I love working with people, so that excited me, and it’s been absolutely amazing,” he says.

He also garnered national attention for his inspiring performances on season 20 of ABC’s Dancing with the Stars, where he finished third with professional dance partner Sharna Burgess. “I’m always pushing people to take on challenges with no excuses,” Noah says, “and I can’t think of anything more challenging than dancing in front of 15 million people on television. So I thought, ‘If I’m going to talk the talk, I better walk the walk.’ ” 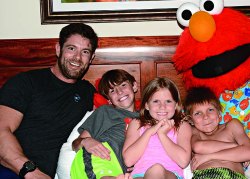 Still, the role he relishes most in life is being a dad to sons Colston, 11, and Jack, 8, and 6-year-old daughter Rian—tossing a Frisbee, going fishing or just hanging outdoors. Jack recently had an assignment at school to write a report on an influential figure and present it as that person. “They were all lined up in the hallway and they gave their little speech,” Noah says. “Some were presidents. One was Elvis Presley. My son chose to be Noah Galloway. It’s choking me up just talking about it. When I walked into the hallway and saw him, it was everything I could do not to cry. If my 15 minutes are up, and nobody ever wants to talk to me again, that’s  ne as long as I’ve done right by my kids.”

Noah says his children continue to motivate him to try new things and are his greatest joy in life. “I think of them first in every decision I make, and I make sure that whatever I’m doing is going to benefit them in some way. No matter what a bad day I’m having, one of them is going to say or do something that is going to cheer me up.” He adds that the relationship he has with them is stronger because of what he’s been through.

“When I woke up in the hospital I was unaware what had happened,” the 34-year-old recalls of that Christmas Eve 11 years ago. “My parents were walking into the room. I saw them and knew that I was somewhere safe or they would not be there. I had no idea what condition I was in, and it was my mom who told me that I had lost my arm and my leg.”

The Birmingham, Alabama, native enlisted in the Army after Sept. 11, 2001, wanting to serve his country. Noah has no regrets about that decision, but after he was injured he struggled with depression. His first marriage crumbled, and he spent a lot of time smoking, drinking and sleeping. His second marriage also ended. “I went through a couple years of depression. I felt like I had no purpose,” he says. “I never regretted going into the military or what happened to me. [I was] a little upset I lost two limbs, but I think what terrified me was the future.

“I didn’t know what it was. I like making sure I’m taking care of others, and I thought if I was injured, I couldn’t do that. Once I realized I still needed to be a father to my children, then I had purpose again. I found that even with my injury, I wanted to help other people; I get that from my mom. Once I got that sense of purpose back, my life turned back around. Everything has just gotten better and better with each day.”

Noah emphasizes that you don’t have to lose two of your limbs to experience depression. “It is real,” he says. “The mind is a very complex organ. If I break my leg, I’d go to the doctor. It baffles me that here it is 2016 and it’s not completely socially acceptable for someone to go to a psychiatrist or psychologist.”

Noah’s parents also gave him a positive foundation and were great examples of how to flourish despite life’s many challenges. He acknowledges that his dad’s life helped prepare him for his circumstances.

“My father has one arm. When he was 18, he worked in a plant and lost his arm,” Noah says. “I’ve never seen him with two hands. He doesn’t wear a prosthetic and he’s done construction my entire life, so I learned there’s no reason you can’t do something. My father just kept driving on even with an injury that could have stopped someone else, and he took on manual labor. He didn’t want to sit in an office at a desk. Seeing all that growing up definitely played a huge part in who I am today.”

Noah created the No Excuses Charitable Fund to raise money and awareness for causes dear to his heart—Operation Enduring Warrior, the YMCA in Alabaster, Alabama, and Homes for Our Troops, which provides specially adapted homes for injured veterans. “Since my injury, I have worked with so many different organizations and people who have been so supportive of me,” he says. “I don’t think it’s right to go up the ladder alone. You take as many people as you can with you, and so many people have been there for me. I wanted to do something that was giving back.

“Life isn’t going to be perfect and things are going to happen,” Noah says. “But when you figure out how to work around those things, it actually makes life more enjoyable. You learn, and that’s what life is about.”

Noah Galloway’s book, Living With No Excuses: The Remarkable Rebirth of an American Soldier, was published in August by Hachette Book Group.