When Olympic swimming champion Amy Van Dyken was paralyzed in an accident, she faced a very tough road to recovery. Using her own positive spirit and the help of those around her, Amy found the resilience strength, not just to carry on but to thrive. 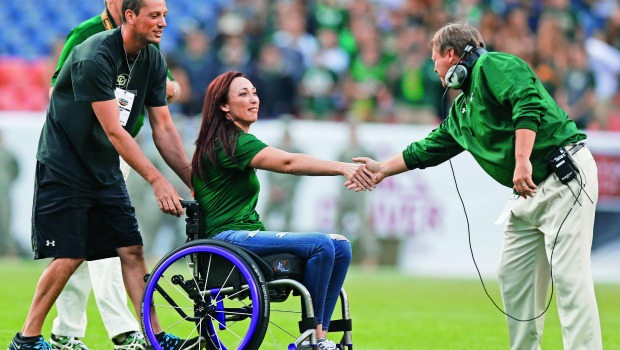 Olympian Amy Van Dyken proves the road to resilience is paved with a positive spirit and sheer determination.

Challenges pop up every day, and you must figure out ways to go around or over them,” says Olympic swimming champion Amy Van Dyken. “You have to be a creative problem solver who looks three steps ahead.”

Everything changed for the six-time gold medalist on June 6, 2014. While driving her all-terrain vehicle (ATV), Amy tumbled over an embankment. The accident left her with a severed spinal cord and brain injuries. She made it through a potentially fatal emergency surgery but was left paralyzed from the waist down. Yet, true to form, her trademark positive spirit and humor never wavered.
“I’ve always been funny,” she says. “The person you see now is the person I’ve always been. Even after my accident and major back surgery with multiple blood transfusions, I awoke talking and laughing. The doctor said jokingly, ‘I must be in the wrong room.’” 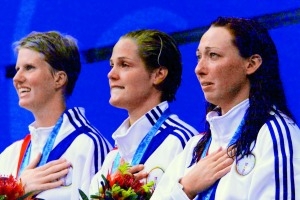 Amy’s can-do attitude drove her to extraordinary success in her swimming career. It is also what motivated her to go from reclining in bed to sitting in a matter of days—a feat that can challenge the balance of some paralysis patients for weeks. She now drives around in her modified Camaro SS, which stands for “super-sexy,” she says. Her ability to focus on the positive in the face of trauma is far from extraordinary, experts say. Rather, resiliency is something we’re all born with—we simply have to develop it.

Cincinnati’s VIA Institute on Character says each and every person possesses 24 character strengths, the building blocks of resilience, to some degree. But it’s our “signature strengths” that form the cornerstone of our personal storehouses of resilience, says Ryan Niemiec, Psy.D, a psychologist and the institute’s education director.
For example, people endowed with lots of perseverance “generally don’t see obstacles as obstacles,” he says. “They see these as opportunities…to learn…to rise to the occasion or…make the end goal that much more sweet.” And where some people prefer to rely on hope as they focus on the future and remain optimistic through the difficult times, others draw on bravery or depend on their creativity to brainstorm solutions to challenges.

Because of the complexity of its interaction with our other personality traits, Ryan prefers to call resilience “positive adaptation.” “This means that when a stressor occurs, [people] don’t cower away,” he says. “They also don’t turn to alcohol and drugs to avoid it, and they don’t spend time getting emotionally upset. Instead, they adapt in a way that is constructive and beneficial.”
Ann S. Masten, Ph.D., has dubbed this type of adaptation “ordinary magic.” The University of Minnesota professor studied youth growing up in disadvantaged environments and concluded that most, despite the obstacles they face, turn out f ne. Her unexpected findings convinced her and other experts that resilience is the practical ability to combine skills such as problem-solving and self-control with caring relationships and social resources
to recover from setbacks.

That can lead us to achieve what experts call “post-traumatic growth.” Case in point: Drs. Steven M. Southwick and Dennis S. Charney found that 93 percent of the 30 former Vietnam prisoners of war they studied attributed their greater appreciation of life to being imprisoned. The authors of Resilience:
The Science of Mastering Life’s Greatest Challenges discovered that the POWs took a painful experience and made it meaningful by using it to readjust their priorities and self-perceptions. By doing this, they had internalized the belief that  “I’ve been through the absolute worst, and though I’m vulnerable, I’m also much stronger than I ever imagined.”
Read more about The Science of Post-Traumtic Growth.

The Vietnam POWs aren’t alone. Shannon Polly, MAPP, who has facilitated resilience training for more than a thousand U.S. Army sergeants, says, “Soldiers in World War II felt that surviving combat made them more resilient. Resilience is believing you can learn through failure.”
Mark D. Seery, Ph.D., an associate psychology professor at the University of Buffalo, says research suggests that experiencing adversity “may have an upside—a silver lining—in that it may help foster resilience.”
Amy is living proof of this. Despiteher upbeat attitude, she has mourned the loss of her mobility and still has tough days. “Every day she suffers from physical pain that she calls a ‘blanket of fire,’ ” says Elisa Persi, Amy’s close friend of 12 years. “She has some bad days, but still remains positive.”
“It’s a big, huge deal—for me and my husband,” Amy says. “But I allow myself to have moments when I’m sad or angry, and then I move on.”

The road to resilience

Like Amy, our personal journeys toward developing resiliency are as defined by our signature strengths as they are by our lifestyle choices. In fact, improving the quality of our overall health—through exercise, sleep, diet and relaxation—can help us rebound after a traumatic life event.

“Research shows if you work with a trainer in a gym for three months, you have a better bounce-back from stress,” says Todd Kashdan, Ph.D., a George Mason University professor and researcher. “You build up willpower, stamina; your mind is better able to respond in a sophisticated way to challenges, and you’re more likely to have a white space between what happens and your response.”

Repairing the brain, and the soul

In part, this is due to the brain’s lifetime neuroplasticity or cognitive flexibility, but studies also indicate exercise can repair damaged neurons, says Arun Krishnan, Ph.D., an associate professor at the University of New South Wales, Sydney.
“Before the accident I was doing a lot of lower body work—squats, lunges,” Amy says. “Now I’m lifting weights and working harder than I did before the Olympics. It was hard just learning how to sit.”
We also cope better when we don’t go it alone, Todd says. “[My friends] don’t let me mope,” Amy says. “They’ll come over and say, ‘Let’s go to the mall.’ They’re amazing.”

Reaching out to others

Amy says she regularly reaches out to her network of friends and health professionals and is active on Instagram and other social media sites. And in January, she returned to her broadcasting career, calling a swim meet for Olympic hopefuls. “Seeking out others—being physically near and touching someone—is beneficial,” Todd says. “Military comrades say they feel a sense of love and contagious bravery.” 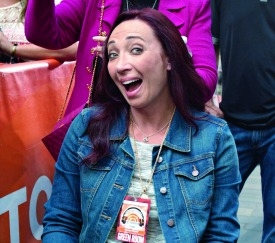 However, Steven and Dennis caution that we’re not all on a level playing field when it comes to resiliency. As always, our genetics and environment affect who we are—and how resilient we can be.
“People with social anxiety disorder, for example, don’t differ from [resilient people] in their number of stressful interactions,” Todd says. “[What differs is] they are unable to be in contact with their anxious thoughts. But we can train them to distance their thoughts…and function. Moving through fear is one way of being flexible.
When you interview snipers, martial artists, actors and athletes, they all talk about feeling fearless. But they experience fear and are aware of it. They just know how to channel it.” And while our personal brand of resiliency may not manifest itself in the same form as Amy’s, experts say moving forward in the face of everyday setbacks, such as job loss or making mistakes, provides us with protection from depression and negative emotions.

Today, nearly a year after the ATV accident that changed her life, Amy is grateful to be alive and to be a high-functioning paraplegic. She’s also discovered the lesson learned by so many others: Altruism can buttress resilience.
For Amy, that means touring the country on behalf of the Christopher & Dana Reeve Foundation promoting spinal cord research. It has also meant founding her own nonprofit, the Amy Van Dyken Foundation, which provides patients with spinal cord injuries needed medical supplies not covered by insurance. Her appearance as the grand marshal in the 2014 Fiesta Bowl Parade alone raised $10,000 for her charity. Now, she has her eyes set on a new personal goal: to become an inspirational role model like fellow paraplegic Christopher Reeve.
“He dealt with his injury with great dignity, and that’s what I want to do,” she says. And today, Elisa says Amy treats every day as a gift. “She doesn’t take things for granted anymore, and when things get rough, she uses perspective to realize that things could be worse.”
“I truly believe I’m here for a reason,” Amy says. “I should be dead. Someone’s not done with me.”

Janice Arenofsky is a freelance writer based in Scottsdale, AZ.