Have a Little Faith to Find Happiness

Faith and positive psychology intersect when it comes to concepts such as gratitude, kindness, forgiveness and mindfulness. 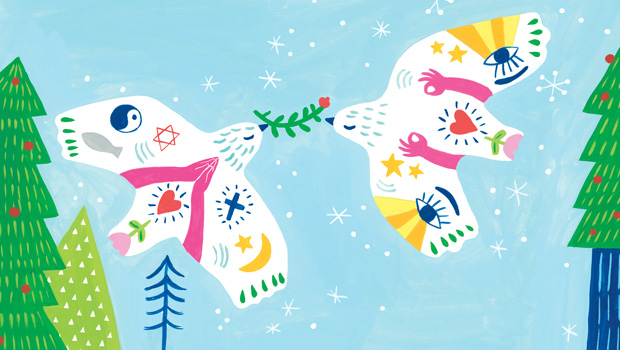 Science and religion each have much to add to a life of joy and fulfillment.

Dena Fields can’t remember a time when religious ceremonies weren’t part of her life. As the daughter of a Church of Christ pastor, she grew up in an environment where religious rituals were part of her daily routine. Prayers, bible study and singing hymns were ways of connecting with her faith, and even as she grew older and pushed back against many of her parents’ rules, she found that she still valued that foundation.

“For me, being raised as a Christian really opened a door,” says Dena, a hairstylist who also teaches yoga. “What I grew up with was very, very structured, and I took components of that with me. I still practice some of those very same things,” even though her beliefs have deepened and evolved since childhood. 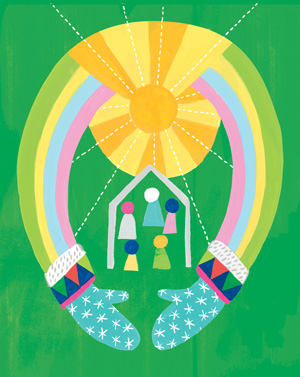 She has explored a variety of religions and practices but always finds components of the faith of her childhood within them. “My daily prayer and meditation time is really important to me,” Dena says. “I spend about 10 minutes talking to God and praying, and then spend about 20 minutes listening and meditating. Then I finish with worship like singing and expressing gratitude.”

She says her upbringing showed her the importance of devoting time to such practices and gave her the discipline to commit to that time even on days when she is busy or doesn’t feel like doing it. Along the way, she has incorporated elements of other faiths into her spiritual journey, as well as pursuing aspects of positive psychology practices.

“Things like gratitude and joy and mindfulness—those all are things that I feel raise me to a higher level. I feel the world needs that, so practicing positive psychology helps me keep that front of mind. And when I am reminded to look for the good in people, it helps raise me up, too.”

Gratitude, she believes, is among the most important practices. She keeps a journal and spends her 10-minute drive to work giving thanks for the day ahead of her.

“Being grateful keeps me in a place of expecting good things to happen in my life and knowing that I am making a difference,” she says, adding that she doesn’t draw a line between the spiritual rituals and psychology practices.

“For me, all of these different beliefs and practices work together.”

Dena’s multifaceted approach to spirituality isn’t entirely unique. In fact, the many parallels between positive psychology and religion have led researchers to compare the two and explore what each can learn from the other.

Religious practice and positive psychology share many traits. For example, Christianity is among the many religions that emphasizes virtues such as gratitude, humility, hope and forgiveness, among others. Buddhism encourages meditation and the cultivation of wisdom and compassion. Judaism has a strong focus on community, giving back and  finding meaning. Positive psychology encourages all those virtues and practices; you might say they follow the same path using different vehicles. 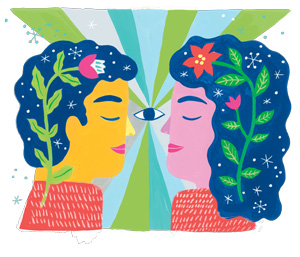 “If you look at character strengths, a lot of those came from religion,” says Greg Evans, Ph.D., a faculty member of The Flourishing Center and current chair of the Canadian Positive Psychology Association. Developing our character strengths—24 positive attributes that fall under six virtue categories—promotes well-being. Among those strengths are forgiveness, humility, self-control, gratitude, hope and spirituality.

Science repeatedly supports the far-reaching benefits of faith and spirituality. Longevity researcher Dan Buettner says that people who attend church services four times a month add, on average, up to 14 years to their life expectancy, regardless of their denomination.

Being part of a community of like-minded believers also adds tremendously to the support believers get from a strong faith foundation. Practicing faith fills us with a sense of purpose—which is important for satisfaction and overall well-being—and helps us navigate life’s ups and downs.

“You have a weekly chance to downshift, you can relinquish some of the stress in your life and you have a built-in social network—all of those things favor a better health outcome,” Dan notes. “And, if you’re going to church, you’re less likely to be participating in risky behaviors.”

In fact, Thomas G. Plante, editor of the book Religion, Spirituality, and Positive Psychology: Understanding the Psychological Fruits of Faith, reviewed more than 20 studies conducted between 1996 and 2012 and found that to be a consistent outcome. The studies showed that, overall, people who regularly engage in a spiritual or religious activity are less likely to participate in behaviors such as drug abuse, unprotected sex and smoking.

They show fewer incidents of alcoholism, depression and anxiety and enjoy better physical health. “Even when people aren’t religious, but they participate in a regular religious practice, they do well,” Greg explains. “Religion supports feelings of social connection and, specifically, engages you in the feeling of doing something good for others.”

Rebecca Carpenter, a devout Christian who lives in Carrollton, Texas, has been involved in the church her entire life. Like Dena, she grew up as the daughter of a minister, and today she works as an administrator in the youth education department of her Methodist church. She is involved in mission work and ministries related to her church, including those for single women.

“When you are raised in a home where you have a minister as a dad and they practice the faith, they teach you and that is all that you know,” she says. “It’s not until you get older that you make it your own. You have to learn that it is your own faith and no one else’s. That is the walk.”

Rebecca values the connection that comes both from her volunteer work with the church and the fellowship she enjoys with other congregation members. “When you are together in a group, you share with each other what you have learned and it keeps your faith going,” she explains. “You can share bible scripture with each other or just pray together and just share. It’s a big part of your faith.” 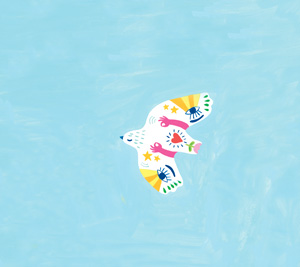 Beyond that social connection, the sense of transcendence, or being connected to something larger than ourselves, has a powerful effect on both our physical and mental well-being, Greg says. That connection to something that can outlast or outlive you creates a sense of deeper meaning.

For Rebecca, that connection gives her greater peace of mind every day. Currently facing breast cancer for the second time, she is moved by the prayers, love and support of her fellow church members, but she also feels the transcendence of her personal relationship with God.

“It keeps me balanced to know that I am connected with God,” she says. “Things will knock you down, but the good thing is that when you do give that burden up and pray and ask God to help you get through something, that’s when the peace comes. When I started praying through that, that’s where the peace came and the anxiety finally went away.”

In Sickness and in Health

Religious, spiritual and positive psychology practices share the benefit of providing a path toward greater personal happiness and positive emotion. Patty Van Cappellen, Ph.D., of Duke University, says studies have shown us specifically which religious practices cause a greater sense of well-being, creating a sort of guideline for people who are interested in enhancing positivity in their lives.

“What it shows us is that there are ways to achieve that whether you’re religious or not. It gives us an idea of the ingredients that are most important, and how we can build those resources.”

Getting people involved may be easier than keeping them engaged, however. While some people, like Dena and Rebecca, consider spiritual practices an essential part of their daily routine, others turn to it only on an as-needed basis.

That’s one more shared trait of religion and positive psychology: It’s not unusual for individuals to become interested in it because they’re facing personal adversity. When their difficult time has passed, they may lose interest and discontinue their practice. Patty is studying how to keep people engaged in their practices even when life is going well.

“Research shows that people tend to heavily invest in religion and spirituality during difficult times, but they may opt out when times are good,” she says.

“The truth is, adversity is not the only path to discovering these things. When there is no adversity, then it opens the door for people to have meaningful, uplifting emotions like awe. If we can learn how to build these resources when we’re feeling good, we can prime ourselves for more of these transcendent moments.”

Listen to our podcast: Religion and Positive Psychology With Patty Van Cappellen