Ed Diener, one of the trailblazers in the study of happiness and well-being, died on April 27. 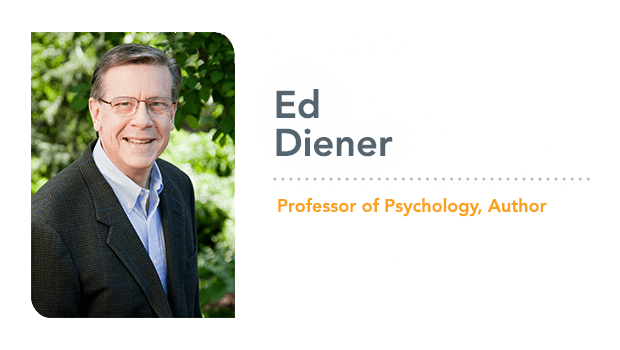 Ed Diener, one of the trailblazers in the study of happiness and well-being, died on April 27. As one of the world’s most cited scholars in the field, Diener had earned the title “Dr. Happiness” from his students and was among the most eminent research psychologists in the world.

His interest in studying happiness began as a college student in the mid-1960s — long before it was accepted as a legitimate researched topic — but it wasn’t until the early 1980s, as a tenured professor, that he was able to immerse himself into research on happiness.

Another major contribution to the field of positive psychology was his research on whether people are happy or not and the genetic basis for happiness. His research dispelled many of the myths about happiness and provided insight into how income, upbringing, relationships, and governmental policies affect personal happiness. His research also underscored how enjoying life is a strong predictor of good health and longevity.

As a professor of psychology at the University of Virginia and the University of Utah and senior scientist for the Gallup Organization, Diener was both an admired teacher and a gifted researcher. He earned numerous teaching awards, and his work has garnered more than 250,000 citations. His work also appeared in more than 400 publications, and he served as president of three scientific societies, was editor of three scientific journals, and the recipient of numerous major awards in the field of psychology.

His passing drew messages of gratitude and grief from around the globe.

“Ed Diener was a trailblazer in the study of happiness, and we are saddened by the passing of one of the fathers of Positive Psychology,” said Live Happy CEO and co-founder Deborah Heisz. “He inspired countless others through his research and teachings to study and implement strategies to improve human well-being. We at Live Happy are grateful beneficiaries of his legacy."