Goat yoga is the latest–and cutest–wellness trend to sweep the nation. 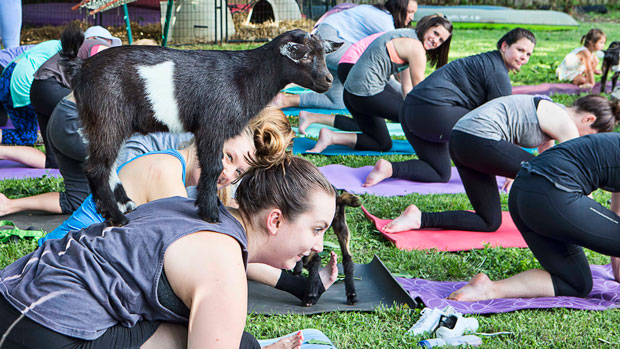 In many ways, it’s like any other yoga class: the thoughtful reminder to silence cell phones and get in the moment; a quick, quiet meditation designed to let students set their intention; some Ujjayi breathing and a sun salutation before slipping into more challenging poses. But as we stretch out our legs, I look around and can’t help but notice that some participants have four legs. And hooves! 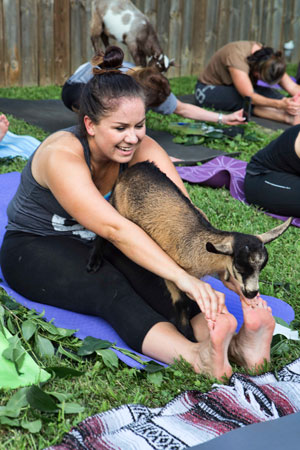 In the past year, goat yoga has become a national phenomenon, with its roots tracing back to an Oregon entrepreneur named Lainey Morse, who began offering outdoor yoga sessions at her farm while goats roamed about. The naturally curious animals interacted with the yogis, and as word spread, the farm’s waiting list filled up for what became known as “goat yoga.”

It didn’t take long for videos of the adorable baby goats frolicking around (and on) class participants to go viral.

Today, goat yoga classes have sprung up across the country. They invariably sell out almost as quickly as they are announced.

“This all happened very organically for us,” says Jamie Codispoti, who, along with partner Max Knudsen, started Shenanigoats Landscaping earlier this year. Their lawn-care service, based in the eclectic, artsy neighborhood of East Nashville, uses grazing goats instead of gas-powered tools.

“Someone on our Facebook page asked if we could do goat yoga, and it immediately went viral,” Jamie explains. “Before we knew it, we had people volunteering their yards; yoga instructors were emailing us offering to teach classes—it seemed like the whole community wanted to make it happen.”

And so Shenanigoats Yoga was born. The first class, held in May, sold out in three hours and each subsequent class has sold out, too. More class times—and baby goats—have been added to accommodate demand.

No goats, no glory

“The goats are making this happen—it’s nothing we’ve created,” says Jamie, adding that one family drove more than two hours on a Saturday morning just to take the class. Some visitors to Nashville have even rearranged their itineraries to experience goat yoga.

The classes are taught by certified, experienced yoga instructors, and participants are encouraged to arrive at least 30 minutes early to spend time with the baby goats. Participants may feed the animals from a bottle, offer them hay and pellets of food, or simply cuddle. And while phones are silenced during the class, selfies and photos are absolutely encouraged. 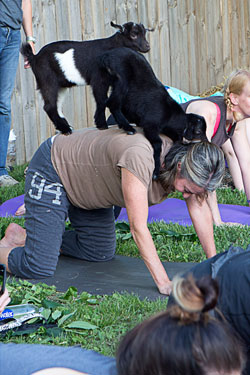 As the class quickly learns, baby goats love to jump on surfaces (such as a flat back in a tabletop pose). They wander among—and sometimes under—people in their poses, sometimes laying down and napping on the yoga mat or perhaps hopping on top of someone holding a pose.

“This is about more than yoga, it creates a connection that you don’t usually see happen so quickly,” Jamie says. With backgrounds in social work, both she and Max were quick to recognize that goat yoga is good for the soul as well as the body.

“I know from the work I do that animals can help calm people down, and we see that in every class,” she says. “You become focused on the goats instead of whatever it was that happened that day. It really brings people together with this awesome sense of community. They’re laughing and talking like old buddies. It’s amazing to watch.”

The bleat goes on

A 2005 study published in the British Medical Journal confirms that playing with an animal releases dopamine and serotonin in the brain, while at the same time lowers levels of stress-driven cortisol. Other studies have linked playing with animals to helping ADHD and even increasing longevity.

These benefits are evident during a recent Shenanigoats class. Watching the baby goats hop and play draws universal smiles and adds a sense of childlike wonder to the class, which is one reason yoga instructor Andi Halbert encourages everyone to “seek joy and happiness” as part of their practice that day.

It seems they need look only as far as the nearest baby goat to discover it.

Listen to our podcast, Yoga: Not Just For Grown-Ups Anymore, With Susan Verde