Let Your Calling Bring You Purpose

Traveling artist finds gratitude and awe in the world’s most isolated places. 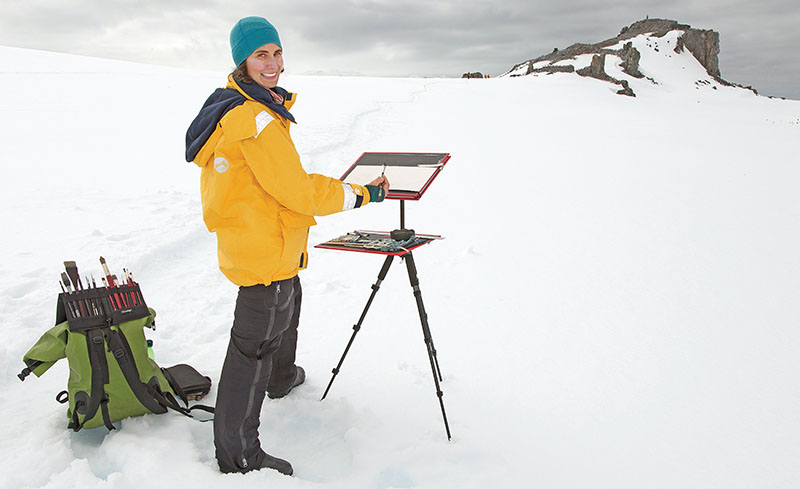 Maria Coryell-Martin sketches at Half-Moon Island in the Antarctic. Photo by Rosemarie Keough.

Traveling artist finds gratitude and awe in the world’s most isolated places.

In 2005, Seattle-based artist Maria Coryell-Martin stopped in Ilulissat, a town in western Greenland that sits some 200 miles north of the Arctic Circle and is home to roughly as many sled dogs as people. As she waited for the ferry that would take her along the coast, she hiked up to view the Ilulissat Icefjord, the world’s most active glacial system.

Twenty billion tons of icebergs pass through this fjord every year, and it’s likely that the iceberg that sunk the Titanic originated here. “I saw this massive wall of ice on a scale unlike anything I had ever experienced before,” Maria, 33, says, “and I felt an immense sense of awe and gratitude that brought me to tears.”

Much of that gratitude had to do with Maria’s ability to create a singular career that fills her with joy and a sense of purpose. She is an “expeditionary artist”—a job title she made up—who travels to polar and glaciated regions, often in collaboration with scientific teams. Out in the field, she sketches with ink and watercolor, creating, she says, “my palette of place, a record of experience, climate and color.”

Maria is “hooked on ice,” a passion she can trace back to her father, a retired oceanographer. “When I was little my dad would be off on Arctic research excursions and we’d have radio chats to his ship,” she says. “Then he’d come home and there’d be massive parkas in the hall closet.”

In the last decade, Maria has made more than a dozen trips to remote, icy destinations. She has spent weeks at a time in the Arctic. Dropped by helicopter in the center of an iceberg, she’d set up her easel to sketch narwhal whales and polar bears while a team of marine mammal biologists captured the animals’ sounds to create acoustic profiles and study the effects of shrinking sea ice on their feeding patterns and health. (“Imaging the Arctic,” an exhibit based on a 2013 Greenland expedition, was mounted earlier this year at Seattle’s Nordic Heritage Museum.) There have also been stints as an artist-in-residence on expeditions to Antarctica, the Falkland Islands, Patagonia and the Canadian province of Newfoundland and Labrador.

“I love the quiet and freedom of these vast open spaces,” Maria says, “where the only sounds you hear are the wind blowing, your own breath and the beating of your heart.” She prefers the austerity of glacial landscapes to the lushness of tropical zones, finding poignant beauty in the wildflowers that appear when the spring ice thaws and in the graceful patterns of migratory birds. “These are limited ecosystems with animals and plant life that are highly evolved to thrive in the rugged conditions,” Maria says. “But in specialization there’s vulnerability, and I hope through my paintings I can bring awareness to that.”

Portrait of an Artist as a Young Woman

For as long as Maria can remember, she has drawn. As a toddler, she scribbled on the walls and, chastised by her parents, “I’d say the clouds did it.” Soon she was keeping a sketchbook by her bed, and she’s seldom been without one since.

At the age of 7, Maria set a goal: to paint sky and water on every continent. She’s made good on that promise. When she was 11, Maria’s family spent a summer in Tokyo, and she realized how sketching can bridge cultural and language barriers. “My Japanese friends and I would use sketchbooks to explain how we spent our day,” she says. “I’d draw pictures of my life back home—school buses, my bedroom, the trees and flowers around my house.”

She spent part of her junior year in high school traversing the wilderness of Alaska and British Columbia with the Juneau Icefield Research Program. “That’s where I learned basic mountaineering skills,” she says, “and began to see the world through the eyes of scientists.” Studying studio art and French at Carleton College in Northfield, Minnesota,

Maria knew, she says, “I wanted to hang out in remote places, meet local artists and paint.” The college helped her find funding for her alternative career path, guiding her to a fellowship that allowed her to spend a year traveling the world with her sketchpad.

Her global itinerary included the Marquesas Island in French Polynesia, Tibet, Greenland and two months traveling with the Tuareg nomadic tribes in the sub-Saharan desert. She was, she says, “sometimes intensely lonely,” but she found solace in her sketchbook. “When I applied for the fellowship,” Maria says, “I was asked, what is it you’ll do no matter how sick, miserable, lonely or tired you are? And for me, the answer is painting and sketching. That gives me purpose as well as a way to express myself.”

Maria was raised to be fearless, a trait that came in handy when she found herself abandoned for the night at a diamond prospecting camp in Greenland’s backcountry. (“Hey, Maria,” read the note the geologists had left for her in the cook tent. “We decided not to leave a night crew. Sorry we couldn’t find you. If all goes well we’ll be back to get you tomorrow.”) She has faced other physical risks, like nearly slipping down a glacier’s crevasse or crossing an 18,000-foot high mountain pass in Tibet’s Mount Kailash with no equipment beyond running shoes. But, she says, there’s a bigger risk in being too cautious to stray outside your comfort zone: namely, missing out on your dreams.

“I encourage people to think about what they really love to do and see if they can make it happen,” she says. “Maybe not everyone will want to hang out in the polar regions and paint, but I hope to help serve as an example of going for something a little unconventional.”
(Visited 85 times, 1 visits today)
Popular Articles